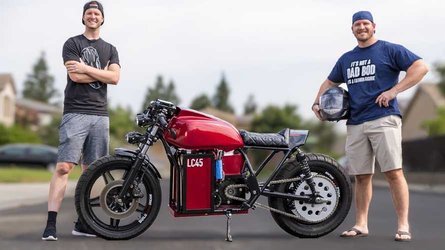 Back in April, 2021, Dustin introduced us to YouTube channel The Inja’s electric CB750 build. It’s an impressive undertaking, and one that channel has documented in detail in a YouTube playlist. For those who want the SparkNotes version, they created a timelapse video that compresses the approximately one-year build into about half an hour.

What did it cost them to electrify this CB750 from scratch? As anyone who has tackled any kind of project vehicle can tell you, the amount of money you pay tends to be lower if you’re willing to do more work yourself. Conversely, the monetary price will go up the more work you have someone else do.

Most of us don’t like to think about sweat equity when we’re doing something we love. However, if you’re in a profession where you charge for your services, think about your hourly rate. Then think about spending a year on building a single project. If you love it, does that money or time even feel like it counts? That depends.

Anyway, according to The Inja, the project cost them roughly $4,000 to complete. That’s including the $500 donor CB750. They’ve helpfully included an entire parts list in the description of this video, so you can see exactly what they used to bring it all together.

What this timelapse also shows is the incredible amount of custom fabrication work these guys put into building this electric machine. They took cells and built their own battery pack, which the duo says should get around a 200-mile range on a single charge. Of course, that required fabrication of a bracket to secure the battery pack in place, as well as modifying the CB750’s frame. Plenty more similar fabrication and modification work went into this build, as well.

While the Inja team were able to use a lot of the stock CB750, it all required some pretty hefty modification to achieve both the function and the look they were going for. Spending $4,000 to make what looks like a pretty cool electrified CB750 is awesome, but it requires a lot of dedication and hands-on time to make good.

You also need to either already have certain skills, or else have the time, patience, and resources to both learn and apply those skills as you go. If you don’t already have access to the tools and other equipment needed to make it happen, those could also add up. It’ll be rad AF if and when you do it, but it’s important to set realistic expectations, too.