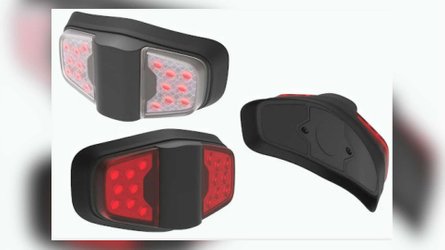 Getting seen by other road traffic when you’re riding is a constant challenge for riders. If you get rear-ended in a car, it’s annoying and possibly expensive, but often doesn’t result in serious injuries. However, the same thing happening on a motorcycle can be a whole different story—and it’s one that Third Eye Design created InView, its wireless helmet and brake turn signal light, to help prevent.

The original InView system was first introduced in 2019 and was awarded Best Safety Product at that year’s AIMExpo. While you can purchase the original version right now through various online retailers, TED has been hard at work improving and expanding the InView family to cover a variety of needs. Here in December, 2021, it’s currently crowdfunding its next round of company investments via the startup investment website Start Engine.

To tell you TED’s plans for InView 2, we first have to tell you about the original InView unit. It consists of three main components: the helmet-mounted unit, a motorcycle unit, and a little controller. The box also contains all the connectors, batteries, mounting adhesive, and even the zip ties and alcohol wipes you’ll need for installation.

What sets InView apart from other products, according to TED, is that it integrates with your motorcycle, so the signals all do the same thing at the same time. If you brake, the brake light lights up. If you turn, the appropriate turn signal lights up. TED also says that it’s smart enough to sense engine braking when you downshift, and will also activate the brake light at that point, as well. Sounds pretty great, doesn’t it?

The plan for InView 2 is to include all the same features as the original InView, only in a slimmer and more robust housing. The improved version will also include emergency dialing if a crash is detected—which is eventually intended to be offered as a subscription service in various markets. Optional rechargeable batteries are also in the pipeline for this improved version as well. As with so many things, there’s a free app for both iOS and Android devices so you can keep tabs on battery life, as well as test your InView system to make sure it’s in good working order.

Third Eye Design is based in the U.S., which is also where it originally developed, manufactured, and marketed the first version of InView. In the time since its original introduction, TED has been working to expand its reach into new markets—including and especially Southeast Asia, which has one of the biggest populations of motorbike riders in the world. InView 2 and its variants are also planned for release in Southeast Asia as well. The current timeline features a plan to bring InView 2 to U.S., Canadian, and Southeast Asian markets sometime in Q1 of 2022—which is part of why it’s crowdfunding investments in its future.

The concept seems like a good one if it works as advertised. Our colleagues over at WebBikeWorld published an in-depth review of the first-generation unit and had a mostly positive impression, although there were of course some areas for improvement. If the InView2 represents significant improvements over the first version, there’s no reason to believe it can’t be of great benefit to rider safety and visibility for a great many riders around the world.