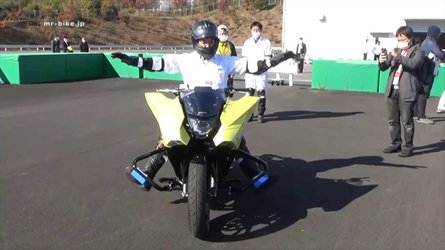 Do you remember what you were doing in January, 2017? If your answer is “learning about Honda Riding Assist at the Consumer Electronics Show in Las Vegas,” then you may be wondering whatever became of that system. Since its initial introduction almost five years ago, it seems that Honda hasn’t given up on its Riding Assist dream, and here’s the video of Riding Assist 2.0 to prove it.

New year, completely new system. To better showcase its effectiveness, Honda opted to use an NM4 Vultus to show off Riding Assist 2.0, which utilizes an unspecified independent swingarm system to balance the bike at low and/or no speed. If you’ll recall, 2017’s Riding Assist 1.0 system was brought to that year’s CES on an NC750S, which made plenty of sense as it worked by modulating the front fork angle to achieve low-speed balance.

The NM4 Vultus, on the other hand, is a bigger, heavier bike—nearly 75 pounds heavier, in fact. Crucially, it’s also one with a design that’s readily able to showcase that independent swingarm’s action for all who want to witness it.

In this video, you see a rider sitting comfortably in the saddle, with no hands or feet engaged with any of the controls or the ground. Bike and rider remain balanced perfectly, with no need for a center, side, or paddock stand required. You also see him piloting the bike around a low-speed training course, including maneuvering easily around a low-speed turn. Does he even touch the rear brake? It doesn’t look like it at all.

Through all low- and almost no-speed maneuvers, the bike never looks like it’s in the slightest bit of danger of tipping in any direction. When it’s completely at a standstill, that completely placid appearance doesn’t change. The rider can mount and dismount with both ease and confidence, at their leisure.

While it’s undoubtedly an impressive engineering achievement, it’s not clear if Riding Assist 2.0 would allow a rider to do much leaning at all. Is it intuitive, learning from individual riders as they spend more time in the saddle, and adapting to their habits and skill levels? Are there settings that would allow a rider to dial in and/or deactivate such a system if it was installed on their bike? Since it’s clearly in an early stage of development, perhaps these are questions that don’t yet have (or need) answers.

For new riders, disabled riders, and others that may have difficulty balancing, a system like this could be a helpful way to get them out on two wheels. Adaptability to rider skill levels and circumstances seems like it would be key to any successful implementation on a production bike, though. While it isn’t clear what plans Honda has for this system yet, it’s interesting to see how it’s developed over time.