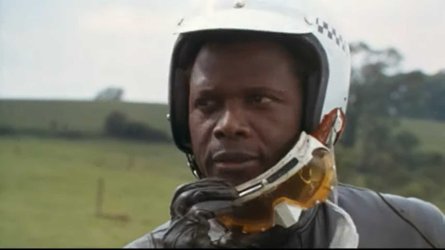 Groundbreaking actor, director, and activist Sir Sidney Poitier has died at the age of 94. Poitier made history as the first Black actor to win a best actor Academy Award for his role in the 1963 film Lilies of the Field. Throughout his career, he received numerous accolades—Kennedy Center Honors, a Presidential Medal of Freedom, two Golden Globe awards, a Grammy, and an honorary lifetime achievement Oscar.

1967 is widely regarded as the peak of Poitier’s acting career, and he took full advantage of that career high to expand his creativity in new directions. By 1972, his directorial debut came in the form of Buck and the Preacher, in which he co-starred with Harry Belafonte and Ruby Dee.

The second film Poitier directed, A Warm December (1973), saw the man portray the character of Dr. Matt Younger. Although it’s not as well-known as some other Poitier films, it’s yet another instance where the man wanted to show a full, rounded, layered character—not some two-dimensional cardboard cutout of a man.

The story revolves around a recently widowed doctor with a young daughter, whom he loves very much. He’s working through his grief, while also trying to be a good dad to his daughter. So, he decides to take her on vacation to England, where he can get in some motorcycle racing aboard his BSA B50 MX and also take in the sights with his daughter. The plot revolves around Dr. Younger meeting the lovely and mysterious Catherine Oswandu, the niece of a visiting African diplomat. She’s strong, capable, and unfortunately also suffers from sickle cell anemia.

The film—much like the rest of Poitier’s career—revolves around layered, nuanced characters. While there have been plenty of depictions of white motorcycle heroes (and antiheroes) onscreen over the years, it also represents one of the rare screen appearances of a Black rider just going about his business and doing something cool on a bike. Perhaps Poitier didn’t set out to be a pioneer in this screen depiction of a doctor who also loves racing bikes as a hobby. In any case, the motorcycle film pantheon is richer for it.

Poitier is survived by his wife, Joanna Shimkus, as well as his six daughters, numerous grandchildren, and friends and fans around the world. We at RideApart join the many celebrating his life, mourning his loss, and appreciating his rich legacy.