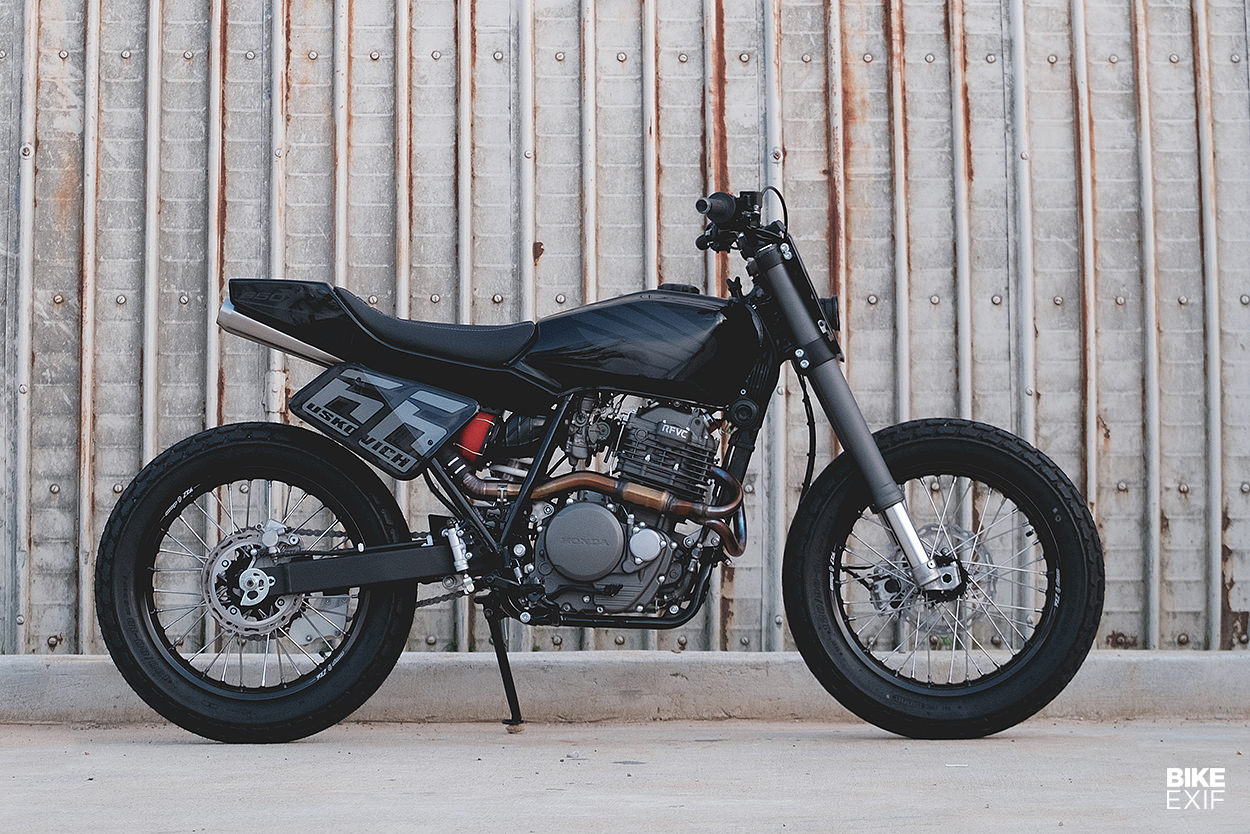 Some motorcycles are a flash in the proverbial pan, abandoned after a couple of years on the market. Others linger in showrooms for years, until stocks are depleted or the tooling costs are paid for.

Then you get the bikes that sell steadily, year after year. The Ural has been produced since 1942, with minor updates every few years. The Royal Enfield Bullet entered production in 1948. Then you get the Japanese workhorses, like the Kawasaki KLR650 (b. 1987) and the Honda XR650L, which has been rolling off the assembly line since 1992. 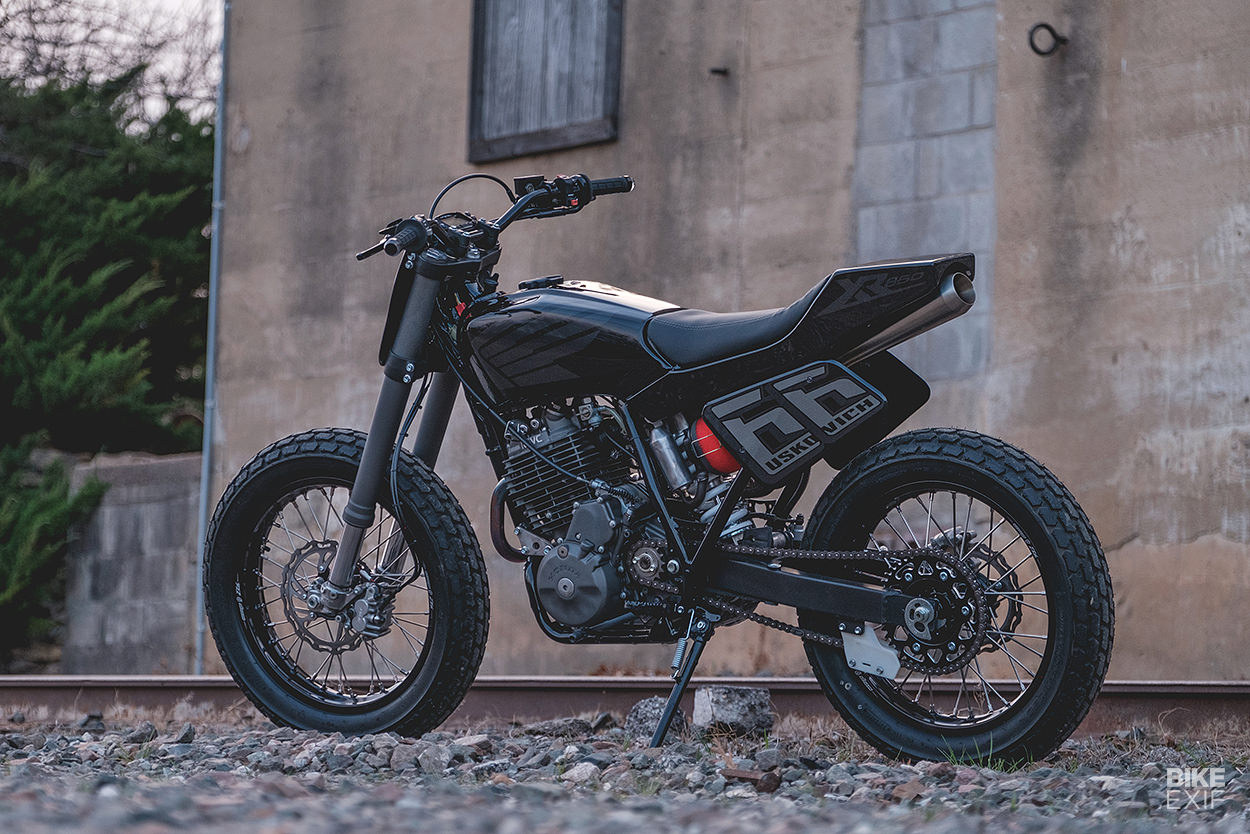 This businesslike street tracker shows the enduring appeal of the XR, and comes from Texas-based ‘JuanVerde’ (identity withheld by request). The builder may be pseudonymous, but his talent cannot be hidden—he’s already built several sharp-looking customs, and this XR650L is his second crack at the model.

“I did a similar build a couple of years ago, pre-Covid, that made the rounds,” he tells us. “This is kinda the 2.0 version—a bit more refined.” 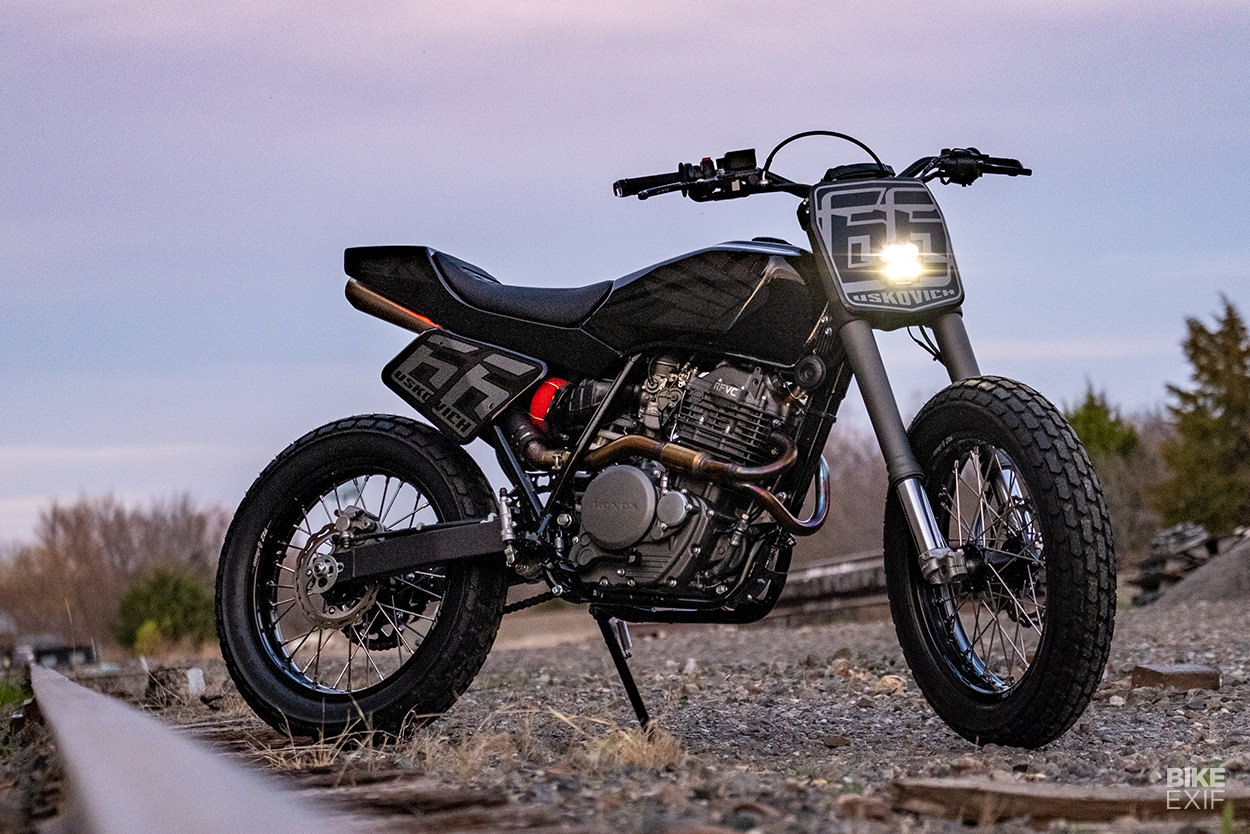 “I build in my spare time out of my garage and shop in my back yard in Denton. Got my start restoring several early CB750s over the last 15 to 20 years, but now I seem to lean more towards customizing things into my style.”

We’re digging the style here, which is minimal and functional. The bulletproof air-cooled single has been treated to a top-end refresh, plus the famous ‘Dave’s Mods’ popular with XR650L owners. (Which is essentially fitting new main and pilot jets in the carb, and drilling the slide.) 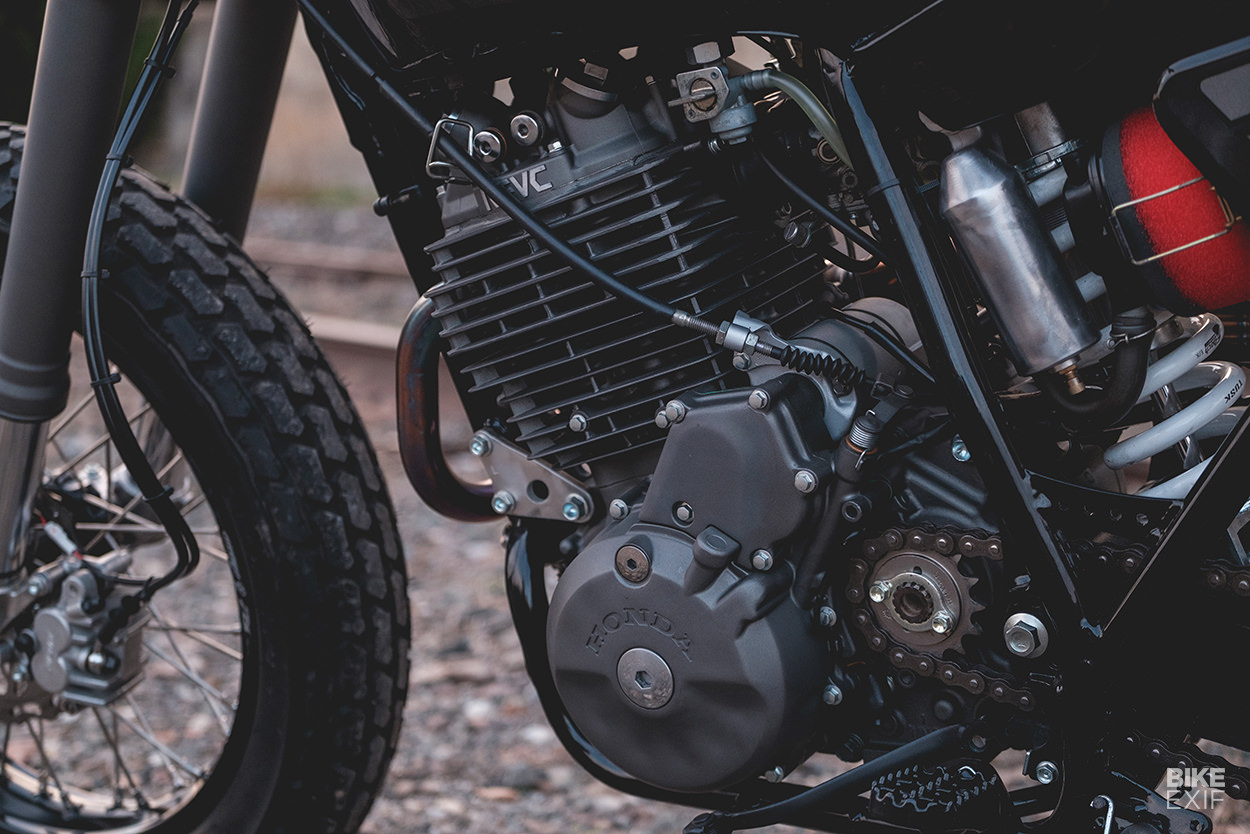 The smog pump has been deleted, and a stainless FMF PowerBomb header fitted to boost mid- to top-end output. This is matched to a ‘BigMouth’ muffler from Cone Engineering, which has a concave internal reverse cone section.

“In between are some pie cuts for the bends that my buddy Carlos Sanchez welded up,” says JuanVerde. “I still don’t have a TIG—just a MIG welder.” 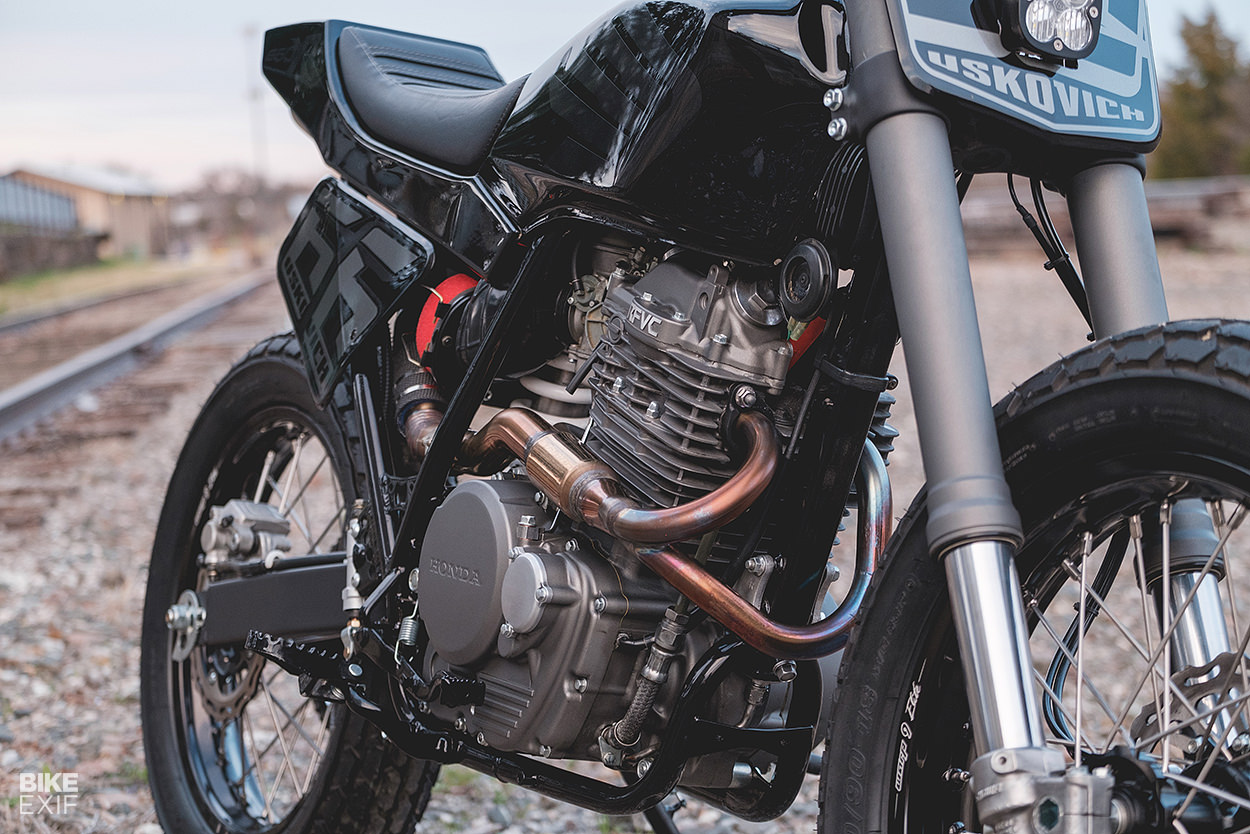 To cope with the extra power and modernize the handling, the forks are now 47mm Showas taken off a CRF, and lowered by six inches.

“I machined grooves in the damper that allow three different height settings,” says JuanVerde. A new steering stem bridges the CRF triples and XR650L frame, and a lowering link drops the rear suspension a couple of inches. 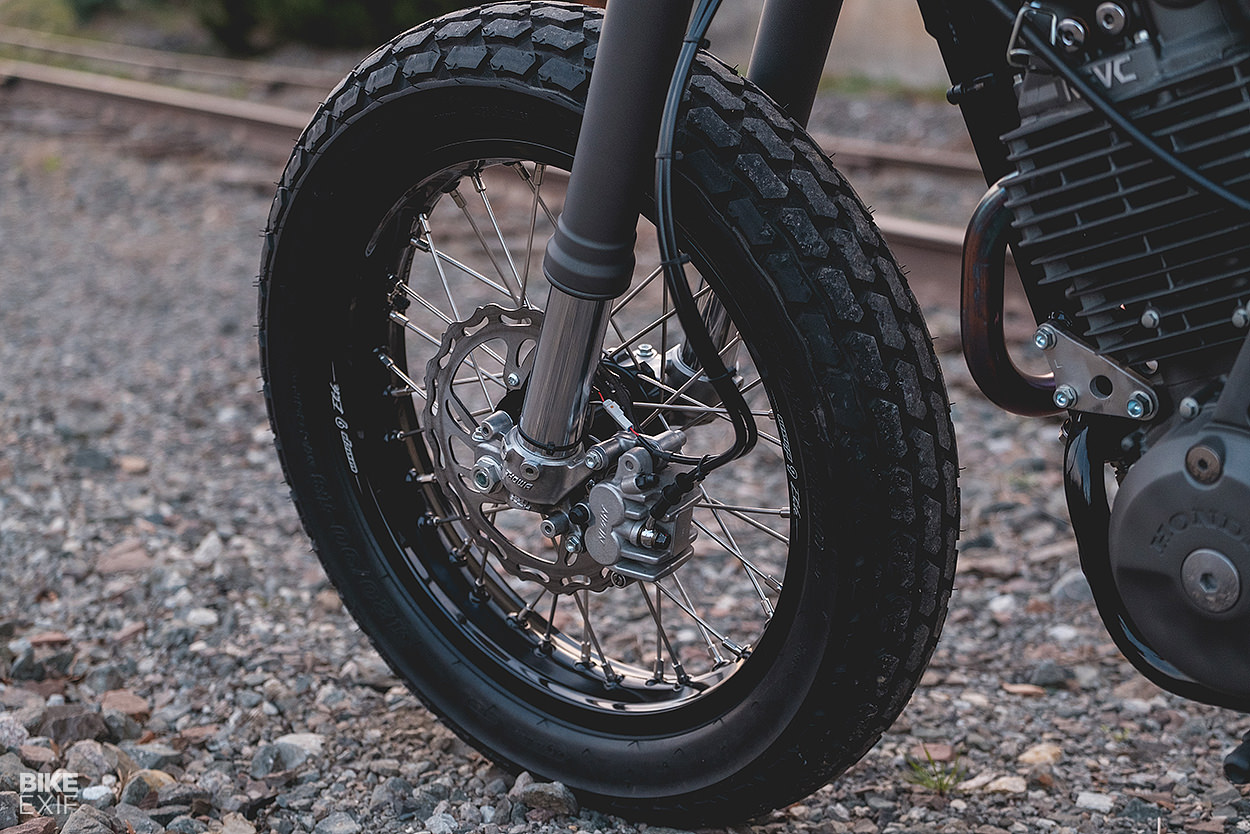 To help the XR with its new life on the streets, JuanVerde has dropped the size of the front wheel from 21 inches to 18—to match the stock size at the back.

The new rims are three-inch section, with stainless spokes, and are fitted with DOT legal Dunlop K180 rubber. 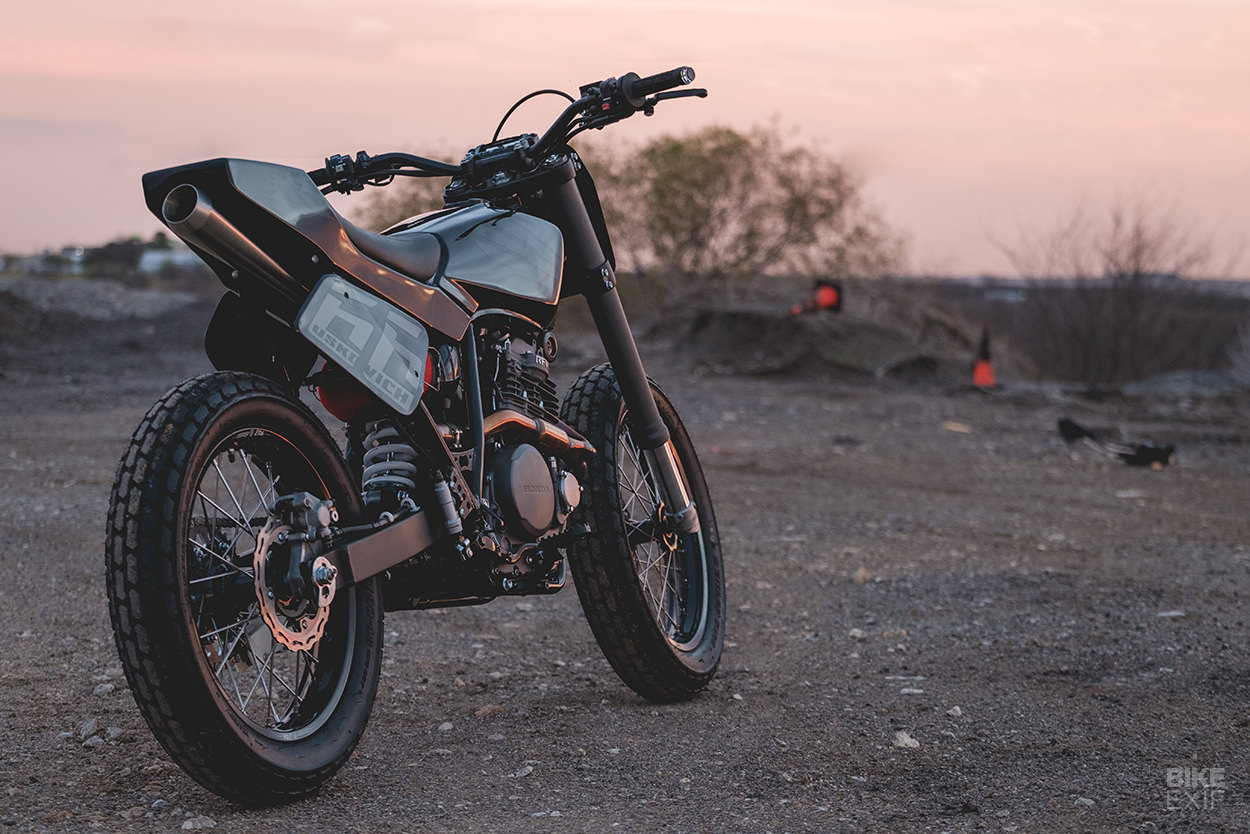 On the fabrication side, the back of the frame has been rebuilt with a new design and larger diameter tubing, which also hides LED lighting. The low-profile tank is from a Honda FT500 Ascot, subtly modified to fit the top of the XR frame, but JuanVerde made the tail section himself.

“I used three pieces laser cut from my drawings, then hammered them over plywood and welded and finished them. It’s welded to the tank too, so the tank and rear section are one piece—held in place by two hidden fasteners.” It’s a slick and professional job, topped off with a seat custom-made by Extreme Upholstery in Denton. 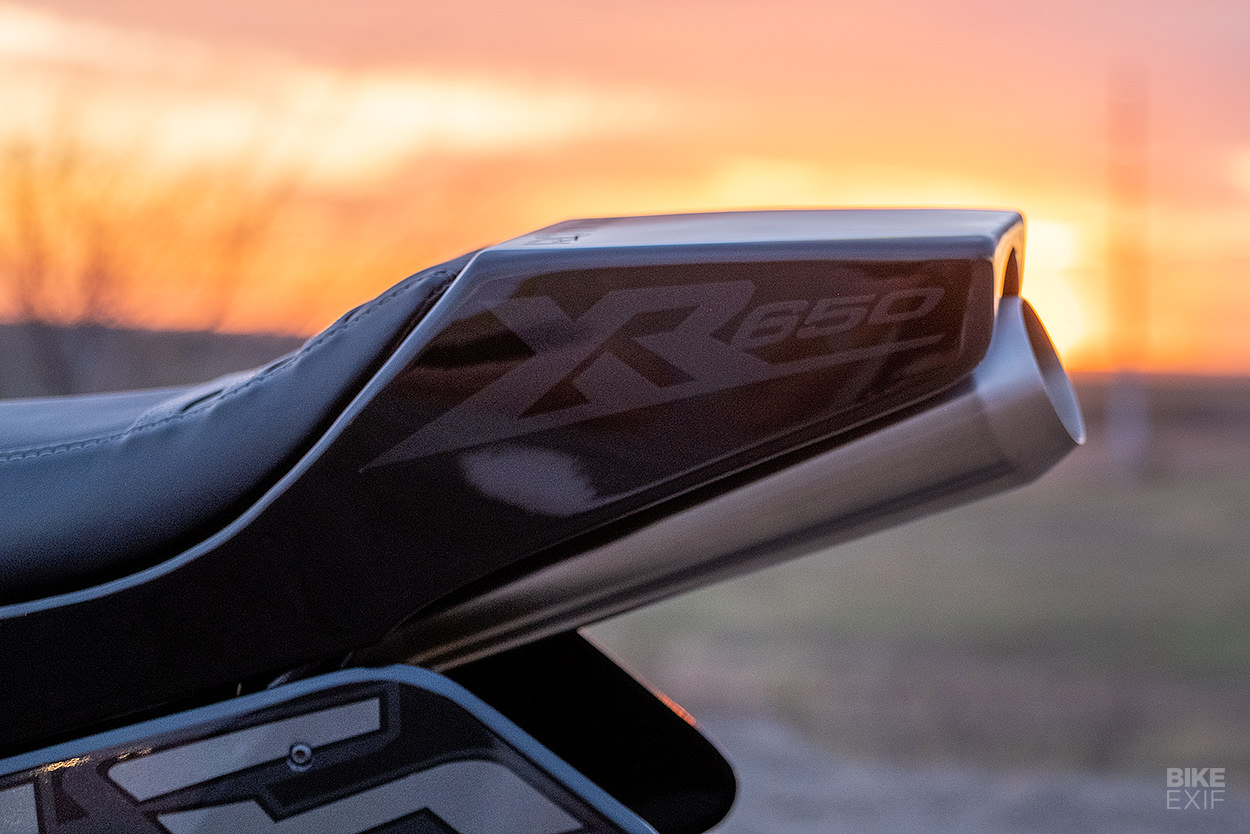 After fabricating an electronics/battery tray—and laser cutting new number plates with rolled edges—JuanVerde turned his attention to the electrics.

A TrailTech Vapor display supplies data for the rider, and a Baja Designs Squadron LED delivers several thousand lumens of lighting up ahead. But there’s one aspect of this build that JuanVerde would prefer to forget. 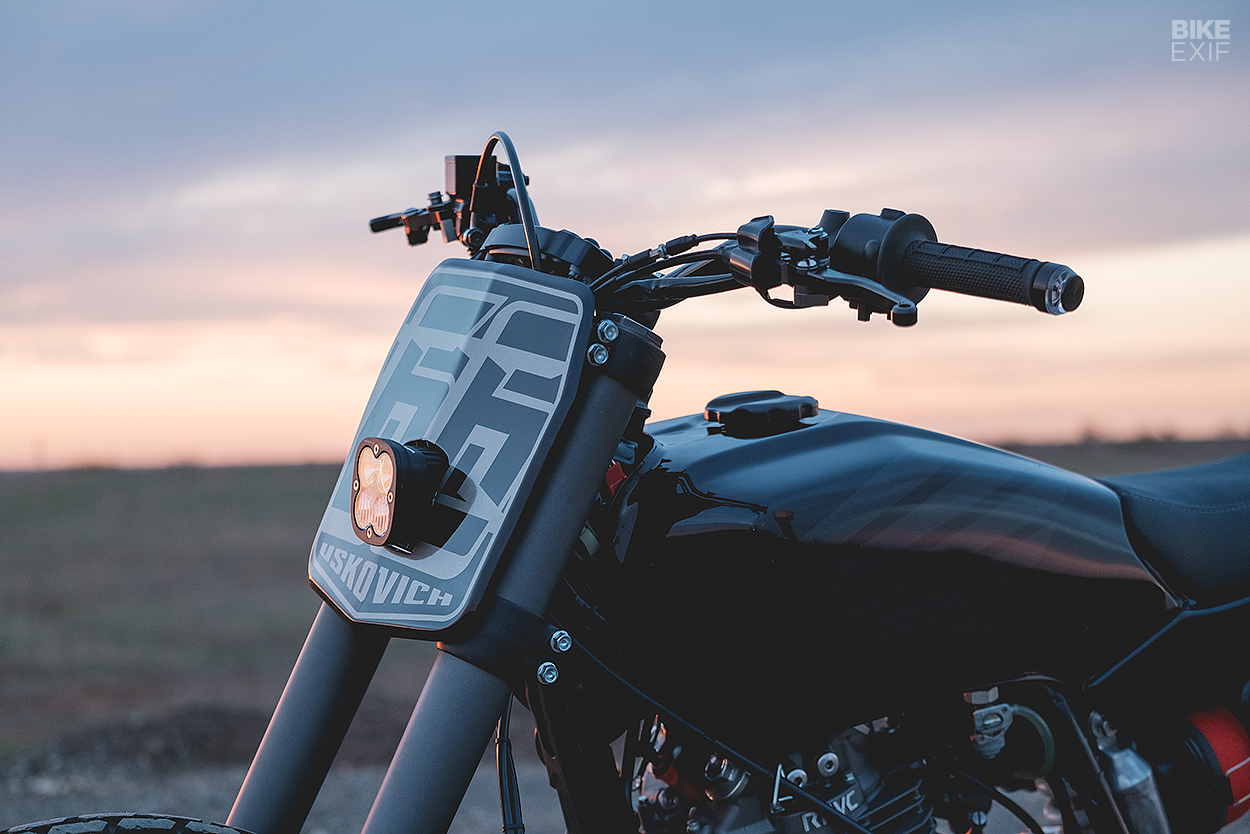 “I did the paint using my trusty E-Z Up [pop-up shelter] as a booth. Not sure I’ll ever do that again,” he says ruefully. “The motor, swing arm, triples and fork lowers are Cerakote—I really dig their finishes.”

We really dig the whole bike. Despite being a quarter of a century old, it looks perfect for ripping up the streets around Dallas. And if you like the sound of this, don’t forget you can still buy the XR650L in 2022. Complete with an old-school CV carb, just waiting for one of ‘Dave’s Mods.’ 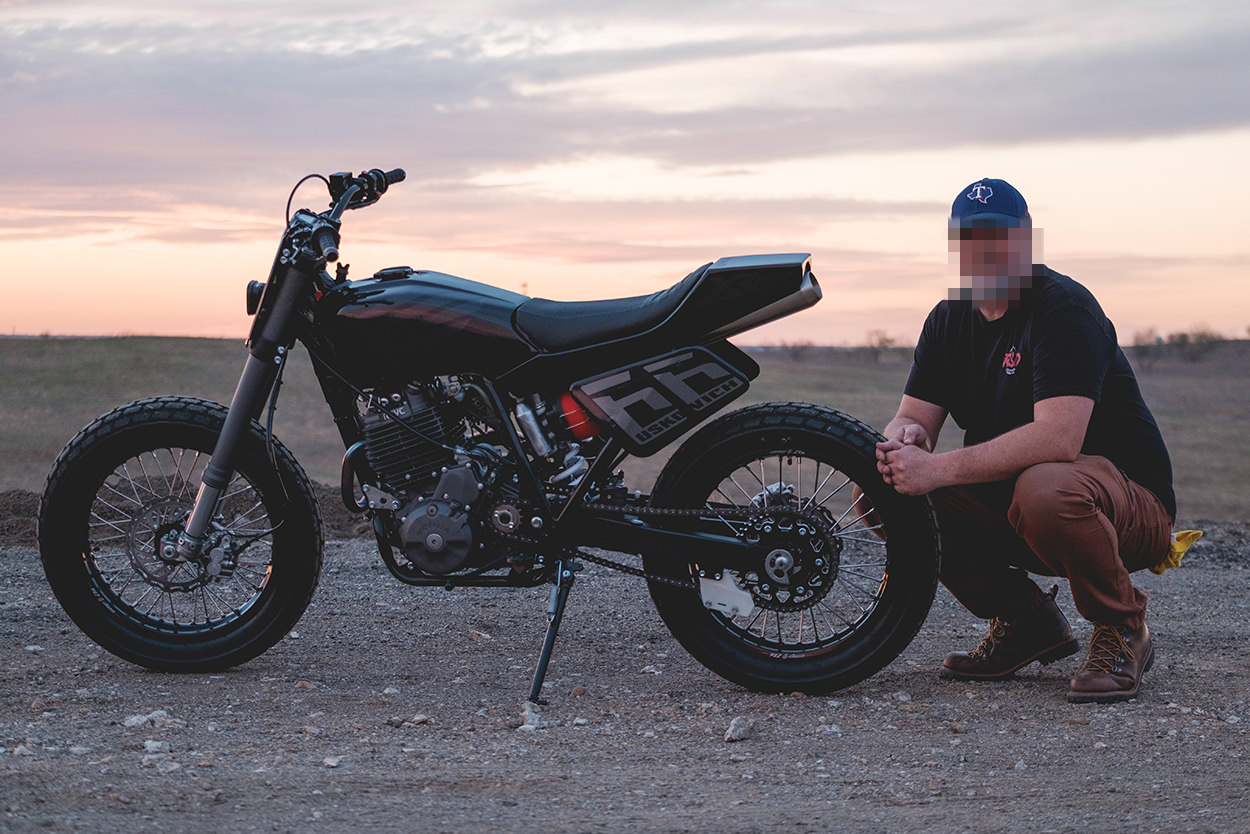 Tips For A Successful Test Drive