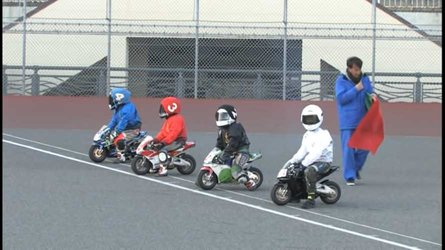 Japan’s Autorace motorcycle racing series is seriously intriguing stuff. It functions similarly to speedway racing, except it’s done on specially constructed tarmac circuits instead of dirt. Riders have strict rules, both for the bikes and the racing. It’s specialized in the extreme, for sure. How do you take it to the next level, you may wonder?

What if we told you there was apparently also pocket bike autorace? Going at ludicrous speeds on strictly regulated, full-sized autorace bikes is bonkers enough. I mean, having no brakes, no gauges, and no rear suspension sounds mad enough on a bike made to fit your average reasonably fit adult.

Now, it’s unclear whether those same rules are the case on the pocket bikes you’ll witness racing if you watch this video. Perhaps racing officials at the Kawaguchi circuit hosting this specific race felt like zipping pocket bikes around with your knees up around your ears was challenge enough? Would you really blame them if they did?

In any case, like regular autorace events, there are eight competitors on track here. The most immediate visual difference in watching them compete is that clearly, riders need to do a whole lot of yoga before mounting up on their bikes. If you thought we were kidding about their knees being up around their ears, let me just take this time to assure you that we were completely serious.

The incessant droning buzz of those tiny terrors tearing around the track enhances the visuals of riders’ knees sticking out around their bodies. In fact, it almost forcibly makes you think of wings as you watch them flit around the track at speed. It’s compelling stuff. If you can understand Japanese at all, the commentator mostly sticks to telling you rider positions in the pack, and the whole auditory situation is both tense and oddly soothing at the same time. Maybe it’s that synchronous engine hum? Hard to say.

It’s a nice, short, bite-sized break, perfect to pull you out of those sleepy mid-day hours and get you back on track to finish out your day. Take a break, grab a snack, and watch the race—even if you couldn’t care less about racing. We promise this is not your average motorcycle race.

MV Agusta To Make Its First Appearance At ComplexCon 2021