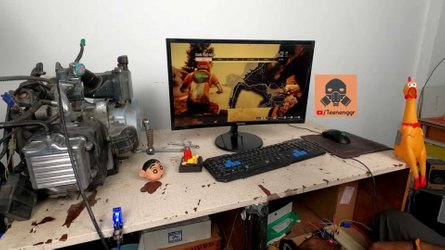 Did you grow up playing video games? If you’re like me, you absolutely did, and the way games have developed over time is simply amazing. Still, even the good things can always be better. If you’re the type of person who has a serious case of Engineering Brain, you may find yourself involuntarily calculating the exact ways in which you, personally, can improve any and every task you encounter in your life.

Friends, that’s what YouTube channel Teenenggr is all about. In this particular video, engineering student Jatin Patel started with a relatively simple ask. He was playing Grand Theft Auto V and thought to himself that it would be nice if he could feel the bike a little more realistically while sitting at his computer. His YouTube channel is dedicated to Arduino and Raspberry Pi tutorials, so you can probably guess what he did next.

That’s right; he got himself a small-displacement motorcycle engine, sat it on his desk next to his monitor, wired up an Arduino microcontroller, and wrote code to control the throttle from his keyboard. You may need to watch this video a few times to appreciate all the tiny details, from the rubber chicken you squeeze to start the bike, to the bouncing Crayon Shin-chan bobblehead that rattles his tiny little head off during the first run.

When Patel switches from a bike to an ATV in the video, he decides he wants a bit of a different experience. So, he pulls the exhaust off for the next little bit—or, at least, as long as it took to shoot this video. Incidentally, if you’re wondering how he dealt with all the fumes he generated while the engine was running, Patel told the Drive that he employed both an exhaust fan and a mask during this project. There’s no word on what his family and/or neighbors think, but hopefully, they can appreciate his creativity, talent, and sense of humor.

While his other videos don’t seem to involve bikes (at least, so far), this seems to be the kind of thing Teenenggr likes to do on his channel, so you may want to check it out. We particularly recommend the Red Dead Redemption 2 horse simulator (no spoilers). It seems from Patel’s other work on this channel that if users ask for it, he publishes the code he writes for these projects on his Github, then links it in the video descriptions later. As of February 4, 2022, this GTA V video is very new, so the code isn’t up yet. However, it may be in the future, so you may want to check back later.