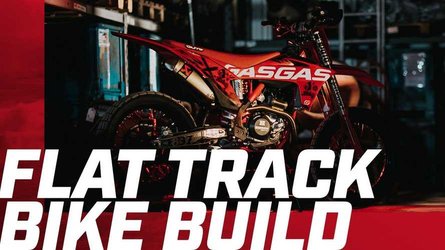 Pierer Mobility Group has been expanding GasGas’ brand recognition since it acquired the Spanish motorcycle manufacturer in 2019. Alongside the company’s enduro and trials bikes, GasGas liveries have graced the Dakar-competing RC 450F and Moto3 race machines. Now, the brand takes its red and white color scheme to the dirt over for the brand’s first flat tracker concept.

At the fore, a supermoto triple clamp accepts a WP XACT PRO fork. Similar to the rear suspension, the team shortens the suspension stroke and adapts settings to the flat track. The cone-valve technology delivers all the feel and response necessary on the dirt while a 48-tooth black anodized rear sprocket allows riders to blast out of the corner.

The flat track-appropriate 19-inch spoked wheels wear Maxxis DTR-1 tires for the utmost grip in the turns and the Akrapovic titanium racing exhaust system provides all the grunt on the straights. A Suter slipper clutch keeps the rig stable when racers send it into a corner at triple-digit speeds while a Hinson clutch cover keeps the curb weight down.

Aside from the performance parts, the MC 450 F also receives a facelift with a shortened high-mounted fender. Of course, the classic red bodywork with GasGas graphics makes the flat track build stand out on the circuit. Branded the FT 450 F, GasGas encourages customers to build their own example using GasGas genuine parts. With the 2022 American Flat Track season only 91 days away, hopefully, we’ll see the FT 450 F on the circuit soon.