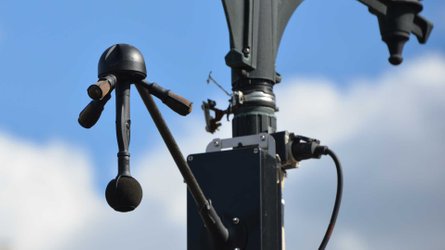 On January 4, 2022, France officially began an expanded test of noise cameras on targeted public streets to crack down on excessively loud pipes. What does that mean, where will it happen, and what kinds of penalties are we talking about? Let’s take a look.

While the Bruitparif-designed Méduse noise camera units have sometimes been referred to as “noise radars,” there’s actually no radar involved. Instead, the devices consist of a 360-degree camera along with four carefully-positioned microphones. The microphones measure noise and directionality, and Bruitparif says they can distinguish from which vehicle any excessive noise is coming. That’s when the camera kicks in and snaps a photo of the license plate, so an appropriate penalty can be assessed.

The first of these devices was deployed on departmental road 46, in Saint-Lambert-des-Bois, just west of Paris in the Yvelines. By local accounts, it’s a popular road for bikers. Officials claim that they’re not purposely targeting riders, and that they instead want to crack down on all vehicles—bikes and cars—that emit excessive noise. Regardless, some local bikers feel attacked—and understandably so, because this expanded testing seems to generally be planned along popular motorbike routes.

Additional deployments of Méduse noise camera devices are planned to roll out during 2022 in Bron, Nice, Paris, Rueil-Malmaison, Saint-Forget, Toulouse, and Villeneuve-le-Roi. For the time being, they will not be issuing fines to offending vehicles. This expanded experimental run is instead meant to iron out the kinks in the system, including important things like establishing an acceptable decibel level.

Apart from feeling as though bikes are specifically being targeted, other questions have arisen. When multiple vehicles—let’s say a group of riders—come through an area together, how feasible is it for this device to be able to pick out one single offending vehicle in the group? What about proximity to hard reflective surfaces, such as when sounds echo off nearby walls, tunnels, or big trucks? It seems like grounds for a system where fines could be issued automatically in error, and the burden will then be on riders or drivers to fight it or else give up and hand over their money in frustration.

Speaking of money, those fines, once enacted, have been discussed around the € 135 mark, or about $152. It’s unclear at this point at what levels the “acceptable” loudness for these cameras will be set, nor how well this number dovetails with the levels that motorbike OEMs anticipate observing with Euro5B enforcement.