France Publishes Official Rules On How To Teach Lane Filtering 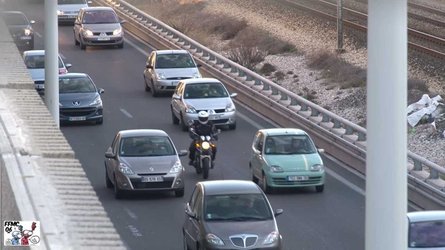 While France’s initial five-year observational lane filtering study didn’t end in a way that French riders would have liked, the ensuing ban on the practice ended up short-lived after significant rider protests. At the end of February, 2021, France’s delegation for road safety announced plans for a new, expanded observational study that would start in June, 2021.

Now that it’s January, 2022, how are things going? The study itself will continue through 2024, so it’s too early to report any conclusions. However, there have been some extremely positive developments that probably wouldn’t have happened if the first study hadn’t been conducted. Among the positive changes are new directives for instructors who are teaching A1 and A2 learners how to ride on French roads.

France publishes updated decrees and orders in its official federal governmental publication, the Journal Officiel de la République française (or Official Journal of the French Republic). Entries into the Journal are spelled out both in great detail and in no uncertain terms—which is honestly refreshing. Who doesn’t enjoy clarity, and a lack of wishy-washy language that’s not wide open to vague interpretation?

Anyway, the Journal entry published on January 5, 2022, specifically regards the Order issued on December 27, 2021 regarding inter-lane traffic and new motorcycle rider training. All text contained within went into effect on the day after publication, which was January 6, 2022—which means that instructors teaching new riders should already be teaching their students how to safely assess whether it’s a good opportunity to filter on public streets. Details of both theoretical and practical student instruction are thoroughly described in the full Journal entry, which we’ll link in our Sources (text is, of course, in French).

During the course of the current three-year observational study, this behavior is permissible on certain roads within the following French departments: Bouches-du-Rhône, Haute-Garonne, Gironde, Hérault, Isère, Loire-Atlantique, Nord, Rhône, Var, Alpes-Maritimes, Drôme, Vaucluse, Pyrénées-Orientales and the Ile-de-France, as well as in the metropolis of Lyon.

At this point, we must note that it’s still in the observational study phase. However, the fact that officials took the steps of writing extensive training rules up and including them in the Journal can only be seen as a positive step for riders.

These Four Indian MM5As Are Tiny, Adorable, And Looking For New Homes