Home » Articles » For the Love of Nothing
Articles 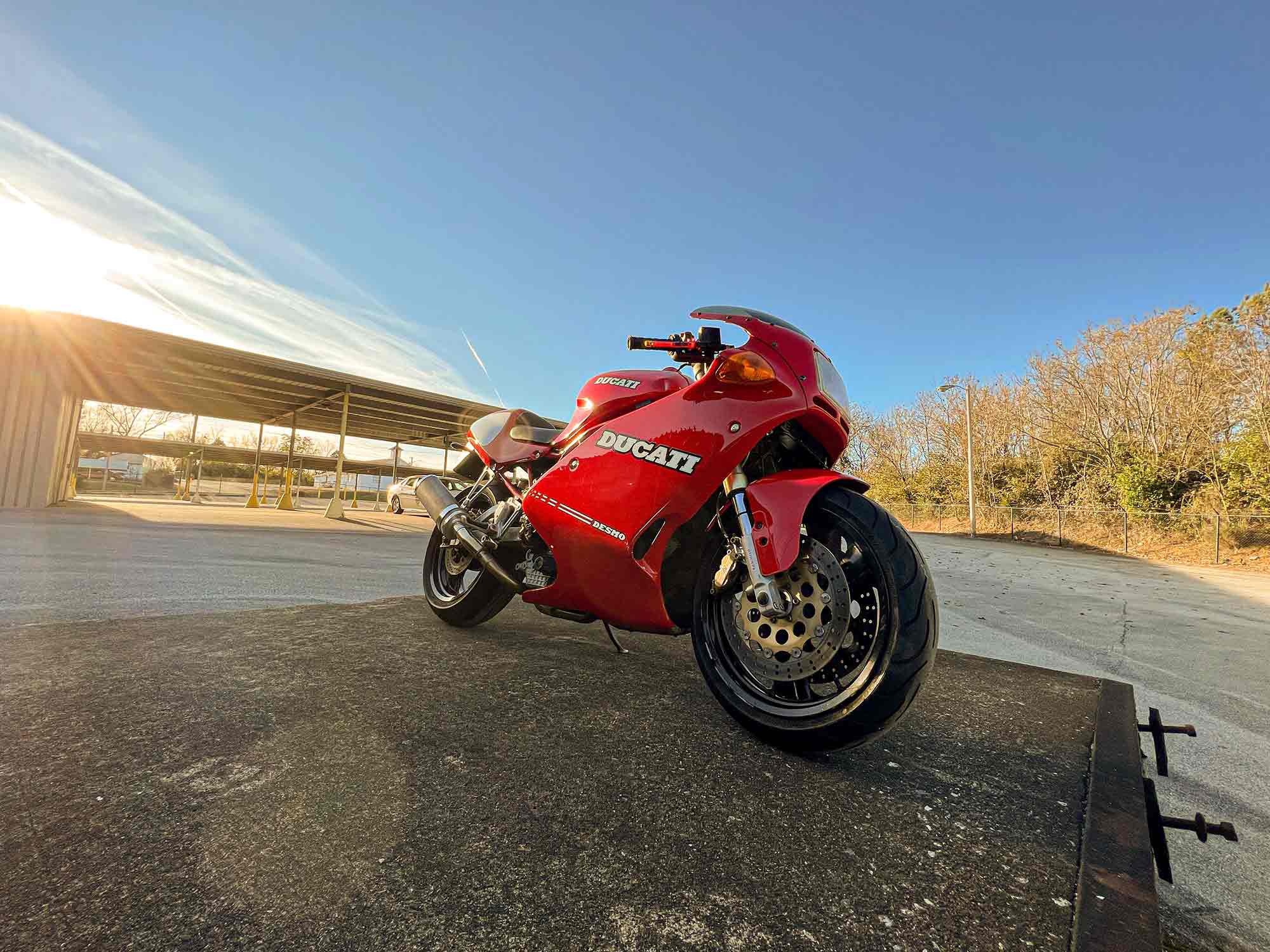 I have a friend who says that everyone’s damage is different. And while that’s generally true for childhood traumas, it seems like all our dents align this time of year. The days are short, the nights cold, and summer’s endless riding seems like a dim and distant memory. Like clockwork, we all start hunting for the next bad idea, encouraged by the electric glow of the screens in our hands and the good-for-nothings we call friends. There was a time when the temptation of a new project was at least sealed away behind the cover of the Thrifty Nickel or phone call. Now they pump the terrible ideas straight into your eyeballs while you’re on the can.

Over Thanksgiving, that same friend shot me a link to The Thing: a red-as-hell ‘93 Ducati 900SS. The listing was the usual litany of lovely lies. Needs nothing. Ready to ride. Solid bike. Cheap as chips. Do it, you won’t regret it. We’d been swapping Ducati-shaped dares for the better part of a month after another fellow instigator brought home a museum-quality 900SS of his own, and this was the inevitable conclusion of those efforts. Now we’re in trouble.

If I have to tell you why an ancient Italian sportbike is the kind of thing a semi-sane person with not one, not two, but three perfectly good motorcycles in his stable would want in his life, we wouldn’t get along anyhow. But on the off chance you need a little more damage of your own, let me explain. This is the machine. The Sausage Creature. The one Hunter S. Thompson spilt ink over after seeing Jesus one fine California day. And look at the bastard. Even saddled with those hideous square ‘90s lights and mirrors, it’s as pretty as a thing made of metal can be. The kind of pain in the ass that gets your heart kicking quicker when you turn on the shop lights, like a slip of leg or brown eyes that linger a little too long.

So I did what any master and commander of his household would do: I batted my lashes and politely asked my wife, Beth, if I could leave her and a house full of in-laws on Thanksgiving day and drive forever north from Tennessee to spend a fair chunk of indisposable income on a motorcycle that was guaranteed to take more time and money. I played dirty. I told her she’d look great on it. She sighed. The seller was properly afflicted. Had converted the entire first floor of an upstate New York farmhouse into a workshop with wooden floors and big glass garage doors that looked out on the snow and the firs. Dusty old Oriental rugs sat beneath splashes of Italian madness. The place smelled like wood smoke and fork oil and warm dog. I wanted to curl up on the carpet and sleep there until spring. There sat my 900SS beside a sister machine.

It was clear I was bringing home the uglier of the two. My bike was somewhat rougher in person than it had been on my screen 770 miles away. It was still maddeningly gorgeous. I didn’t even ask to start it. Just loaded the bastard up. It looked better in the back of my truck, strapped down and tucked away against road salt and flurries. 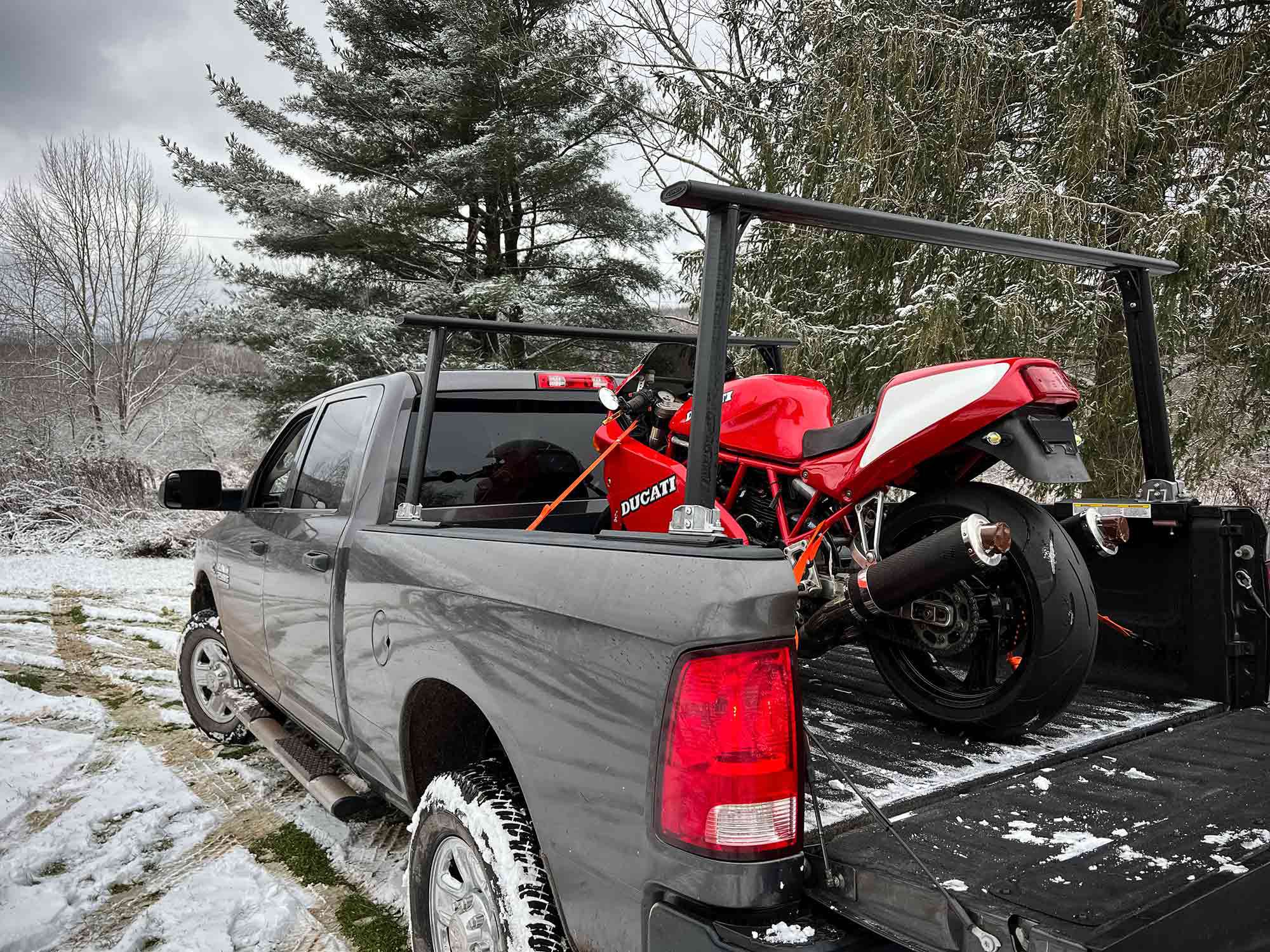 Tucked in for the long drive home. (Zach Bowman/)

A day later it was warm back in Tennessee, and with the shop doors open and the rain coming down I began pulling goofy stickers and making a list. The seller couldn’t tell me much about the bike other than it was “cold natured.” It ran, poorly, on one cylinder. The tires were from 2009, the frame had been bombed red at some point, and the belts looked as if they hadn’t been changed in a decade. I began pulling off bodywork, revealing that twin. The more I took off, the prettier it got, one of the many ways a motorcycle eclipses a car. Pull the front fenders off a ‘67 Mustang and you’ve got something that’s one foot closer to the scrap heap. Yank the fairings off a 900SS and all the delicate beauty of that trellis frame is on display. The teenage flicker of seeing something hidden. 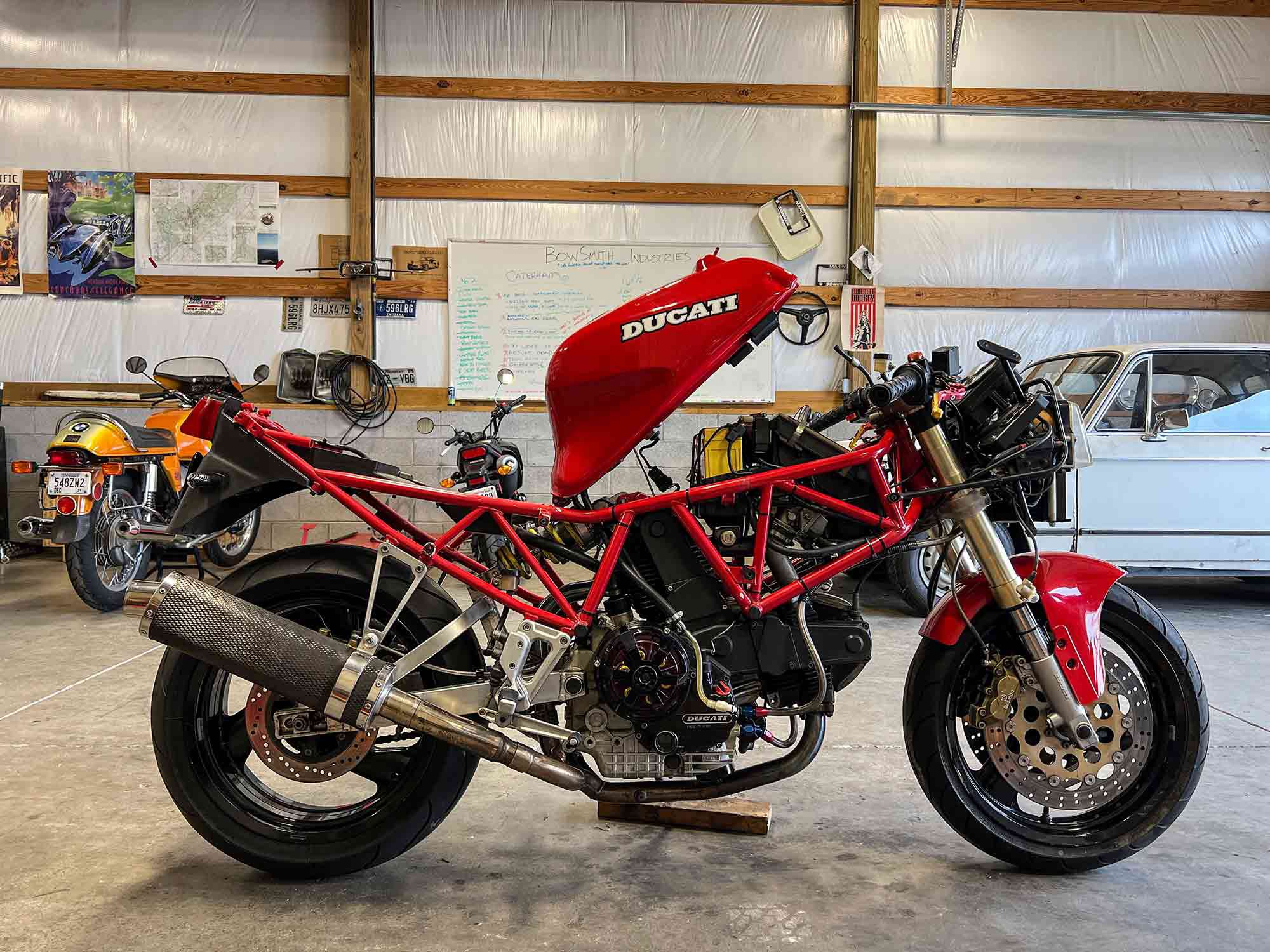 This was, without a doubt, the dumbest way to buy any motorcycle, let alone an old Italian. But there’s peace in starting with nothing. In having to sift through a machine’s past, bolt by bolt, wire by wire. Of having to abandon any assumptions about what works and what doesn’t. In a week’s time, you’re intimate with the thing. You know every missing fastener, every stripped bolt. You’ve traced the fumblings of the hands that came before you, unwinding sloppy electrical tape and zip-ties. Slowly, the picture becomes clearer until you understand the thing, so different from the computer on your desk or the phone in your pocket. A couple of Mikunis bolted together are a simple equation compared to the electronic enigmas that make up our days.

The more I worked, the more it was clear this bike had taken a long nap. The carbs showed the gunk and grime that comes with sitting. The coils and wires were original. The clutch slave seal had long gone cracked and dry. The dollars and days racked up, and when I mentioned this to my fellow enablers, they responded with that ancient truism about Italian machinery: Best to not keep a ledger. I worked down the list until that stubborn vertical cylinder coughed to life one gray dusk. As insane as it sounds, I’d never ridden an air-cooled Ducati, much less a 900SS. I had no idea if my busted knee could tolerate the cramped and coiled riding position. Had no notion of whether it was a thing worth having in my life. But with the streetlamps flickering on and the first spits of rain stinging my bare cheeks as I cracked open the throttle, I understood what Thompson was raving about all those years ago. The roiling big-block sound. The light and agile frame. I wanted to keep riding. Aim the Ducati at the darkness and keep the throttle pinned until I saw sunlight. Until every long, cold night was far behind us both.

France To Require COVID Vaccines For All Athletes Entering Country