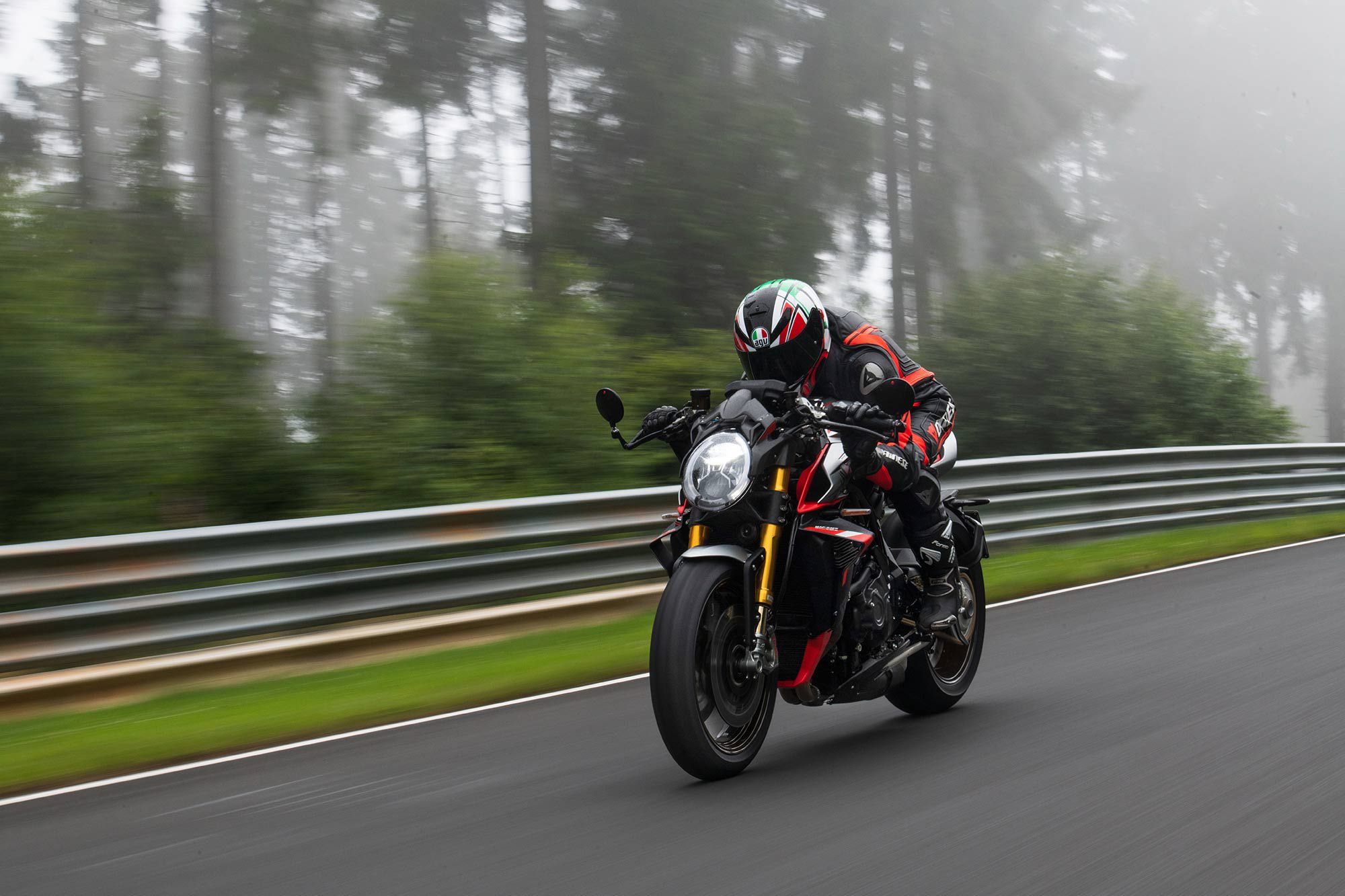 Germany’s Nurburgring is legendary, one of the most storied tracks in all of racing. These days, a 3.6-mile course like Silverstone is long. But at between 13 and 15 miles from start to finish (depending on configuration), the Nordschleife (literally, “North Loop”) is in its own world, one of the most demanding tracks on the planet, with a breathtaking sequence of blind corners, climbs and dives. If you’re going to name a motorcycle after this epic ribbon of real estate, it better be worthy.

Rest easy—with MV Agusta’s new Brutale 1000 RR Nurburgring you’ll never be accused of bringing a knife to a gunfight. Since 2020, MV has been capitalizing on the technical and performance credibility that its current crop of 1,000cc four-cylinder models can showcase, focusing especially on the Brutale 1000 lineup. These machines are legit naked superbikes, and the new Brutale 1000 Nurburgring follows MV’s tradition of numbered limited editions: only 150 will be built. Some riders are sceptical of such offerings, but this is the real deal. Based on the very hot Brutale 1000 RR, the Nurburgring version delivers even better on-track performance by shaving 7 pounds off the stock machine (the news is even better with the race kit—more on that in a minute). But more important is where that weight was pared. The real key to the Nurburgring’s performance advantage comes from the bike’s BST carbon fiber wheels. Left in the clear, they look spectacular, but also reduce unsprung weight. (MV Agusta/)

In a word, it’s the wheels. By adopting a set of BST carbon fiber wheels, the Nurburgring carries less unsprung weight. An added benefit—one which increases with speed—is the reduction in gyroscopic flywheel inertia with the rims. This alone meaningfully improves the steering response as well as the lap times.

You can peel off an even bigger chunk of weight with MV’s racing kit. This is included with the bike as standard equipment, but not installed. You’ll receive a racing-spec 4-into-2-into-1 Arrow titanium exhaust system that, along with the dedicated ECU mapping, bumps output to 215 hp at 13,200 rpm. The exhaust also reduces the bike’s overall weight substantially, to 390 pounds—quite good for a machine in this class. 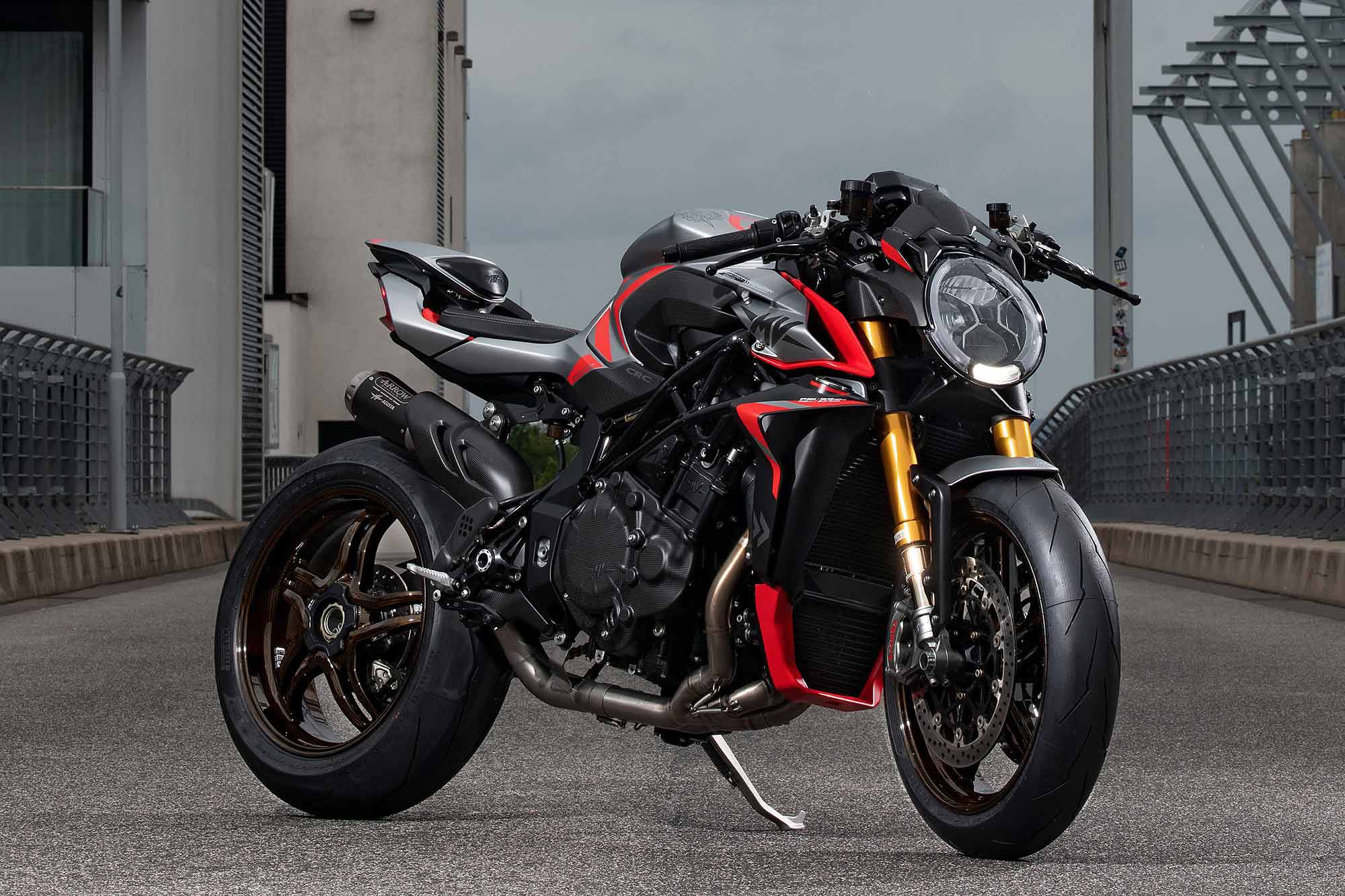 Shown here with the race-spec Arrow 4-2-1 exhaust, the Nurburgring is as deliberate and brutal as the rest of MV’s Brutale 1000 lineup, but with some real performance advantages. The Arrow exhaust is included in the package, but installing it is up to you. (MV Agusta/)

In addition, the Swedish firm provides the Nurburgring’s electronically controlled steering damper, while the braking system is full Brembo, with twin front 320mm discs and four-piston Stylema Monoblock calipers; a single 220mm rotor and two-piston caliper takes care of the rear. Continental’s MK 100 ABS system oversees it all, and the whole electronics suite is the same excellent offering that the newest Brutale 1000 family offers.

In overall appearance, the general lines are unchanged from the Brutale 1000 RR, but the Nurburgring gets some well-done graphics. In our opinion, MV’s clean, sober, single-color treatment is worthy of a concours d’elegance. The only bodywork addition is a small spoiler atop the headlight, designed to add a little downforce effect and to push part of the wind blast away from the rider’s helmet. The combination of a very powerful, Euro 5-homologated four-cylinder engine with a moderate total weight makes the new MV Agusta Brutale 1000 Nurburgring a fully credible “limited edition” model worth collecting. The price in Italy is a “strong” 32,200 euros—a pinch over $37,000 as this is posted. 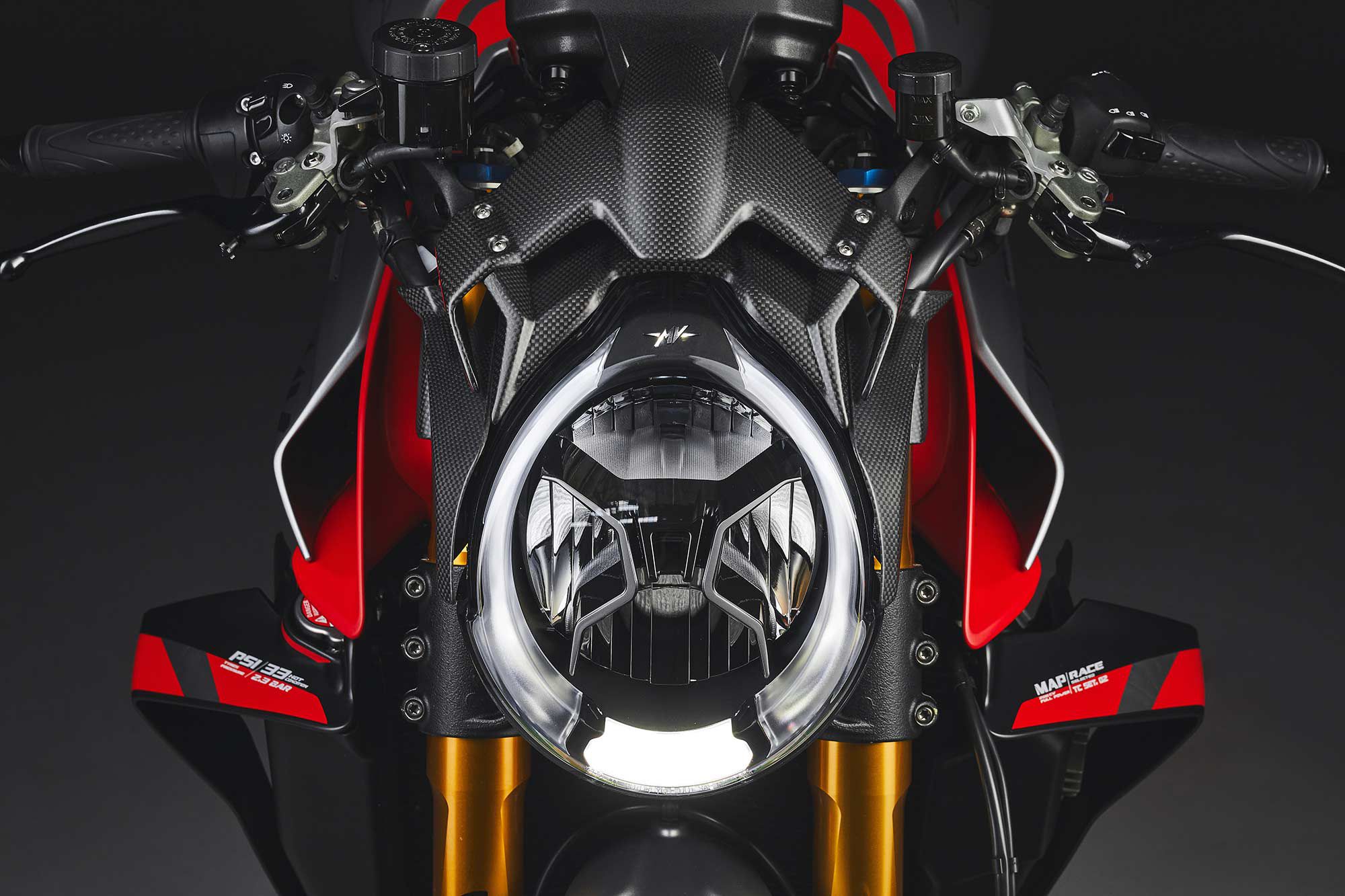 The subtle carbon fiber spoiler/cowl above and around the headlight is the only bodywork change to the new MV Agusta Brutale 1000 RR Nurburgring. While designed to increase downforce, it also sets the bike apart as a limited edition. (MV Agusta/)

First Time in a Side-by-Side Gallery