The new Multistrada V4 Pikes Peak takes a Ducati favorite and refocuses it for the pavement with 17-inch wheels and a single-sided swingarm. (Ducati/)

Last year Ducati announced its new Multistrada V4, positioning it as the king of the crossover class. Some strong numbers supported that statement, starting with the engine’s claimed 170 hp output. The 1,158cc 90-degree V-4 (83mm by 53.5mm bore and stroke) generates 92.2 pound-feet of torque at 8,750 rpm. On Cycle World’s dyno the rear-wheel power was measured at 143.8 hp and  77.8 lb-ft. The compression ratio is an impressive 14:1, and each cylinder breathes through a 46mm throttle body. If there was one issue, it was that the Multistrada is a non-desmo engine.

At first the Ducati purists were outraged, claiming that without the desmodromic valve train it couldn’t be a real Duck. But for the most part they’ve cooled off, especially since they’ve realized the design provides an extremely light and compact engine (147 pounds). The fact that the valve clearances don’t need inspection until 60,000 kilometers (more than 37,000 miles) doesn’t hurt either. For Ducati, that’s an unheard-of figure.

Now Ducati is doing the Multistrada one better for 2022 by introducing the new Multistrada V4 Pikes Peak. Cycle World had the opportunity to score an early ride on one. Now, we have the formal announcement, though we still lack some detailed technical information.

This new version is an evolution of the Multistrada V4 Sport with revised suspension settings; the engine remains unchanged. The new Pikes Peak rolls on 17-inch wheels front and rear rather than the standard model’s 19-inch front and 17-inch rear combo. The wheels are Marchesini forged aluminum pieces, 6 pounds lighter than the cast aluminum wheels on the Multistrada V4 S and S Sport. In total, the Multistrada V4 Pikes Peak is 9 pounds lighter thanks to the wheels and extensive carbon fiber body components, in particular the front section of the partly redesigned upper fairing, the side panels, and the front mudguard. Further underscoring the new bike’s sporting intent, the wheels are shod with Pirelli Diablo Rosso IV tires, a 120/70-17 front and 190/55-17 rear. 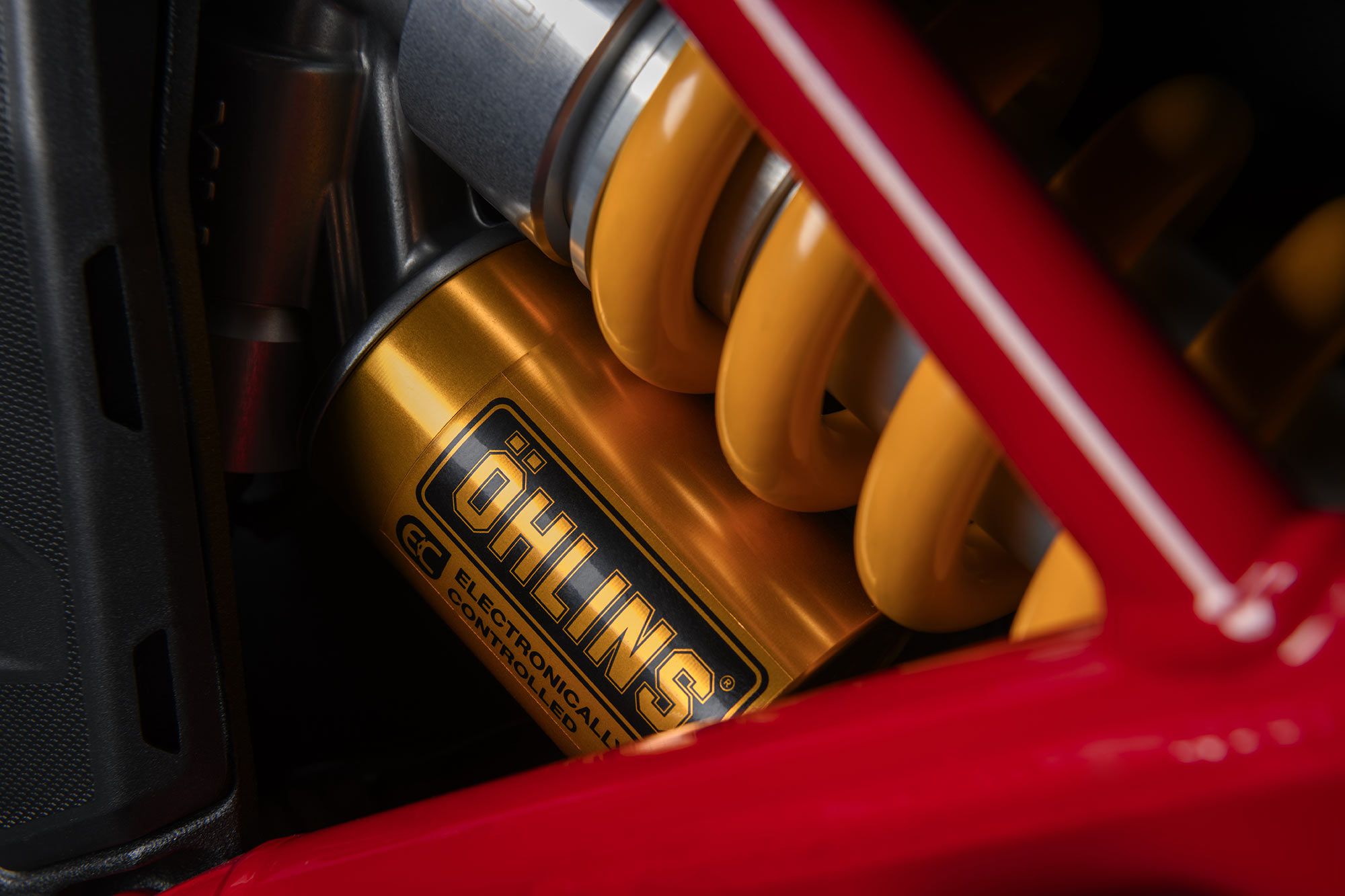 The Pikes Peak also gets some major suspension upgrades aimed at enhancing its sporting performance on pavement. An electronically managed Öhlins Smart EC 2.0 fork and shock adapt their damping action in relation to the riding style and the road conditions. In addition, the Pikes Peak dispenses with the Multistrada’s conventional swingarm, replacing it with a single-sided piece from the Panigale V4. This is a big change, enhancing the bike’s sporting image more than the new bodywork.

The new wheel sizes required revised chassis geometry. To compensate for the loss of trail, steering rake increased from 24.5 degrees to 25.75 degrees. This means that the front wheel has moved forward and the wheelbase has consequently grown by about an inch. Trail should be back to the original measurement of 105.5mm. Seat height is 33 inches, and the riding posture has been refined by moving the pegs a little higher and farther back, while the lower, narrower handlebar and a new smoked windshield offer protection from windblast. Carbon fiber bodywork and new wheels shave more than 9 pounds from the Multistrada, in addition to changing the bike’s look. (Ducati/)

The bike’s braking equipment is impressive, borrowed directly from the Panigale V4. Twin 330mm rotors up front with Stylema Monoblock calipers team with a 265mm rear disc and a floating caliper. Bosch cornering ABS manages the whole system. Both the Multistrada V4 S and the new Pikes Peak include the millimeter-wave radar system, front and rear, allowing adaptive cruise control and blind-spot alert.

The electronics suite also includes traction control and wheelie control, along with a novelty: the addition of Race riding mode to the existing list of rider-selectable power and torque modes. Other details include an electronically controlled quick-shift gearbox and a 6.5-inch TFT instrumentation display that interfaces with the rider’s smartphone and includes Ducati Connect and a navigation function.

The new Multistrada V4 Pikes Peak is announced to weigh 472 pounds dry. Ducati’s US website lists the price at $28,995. 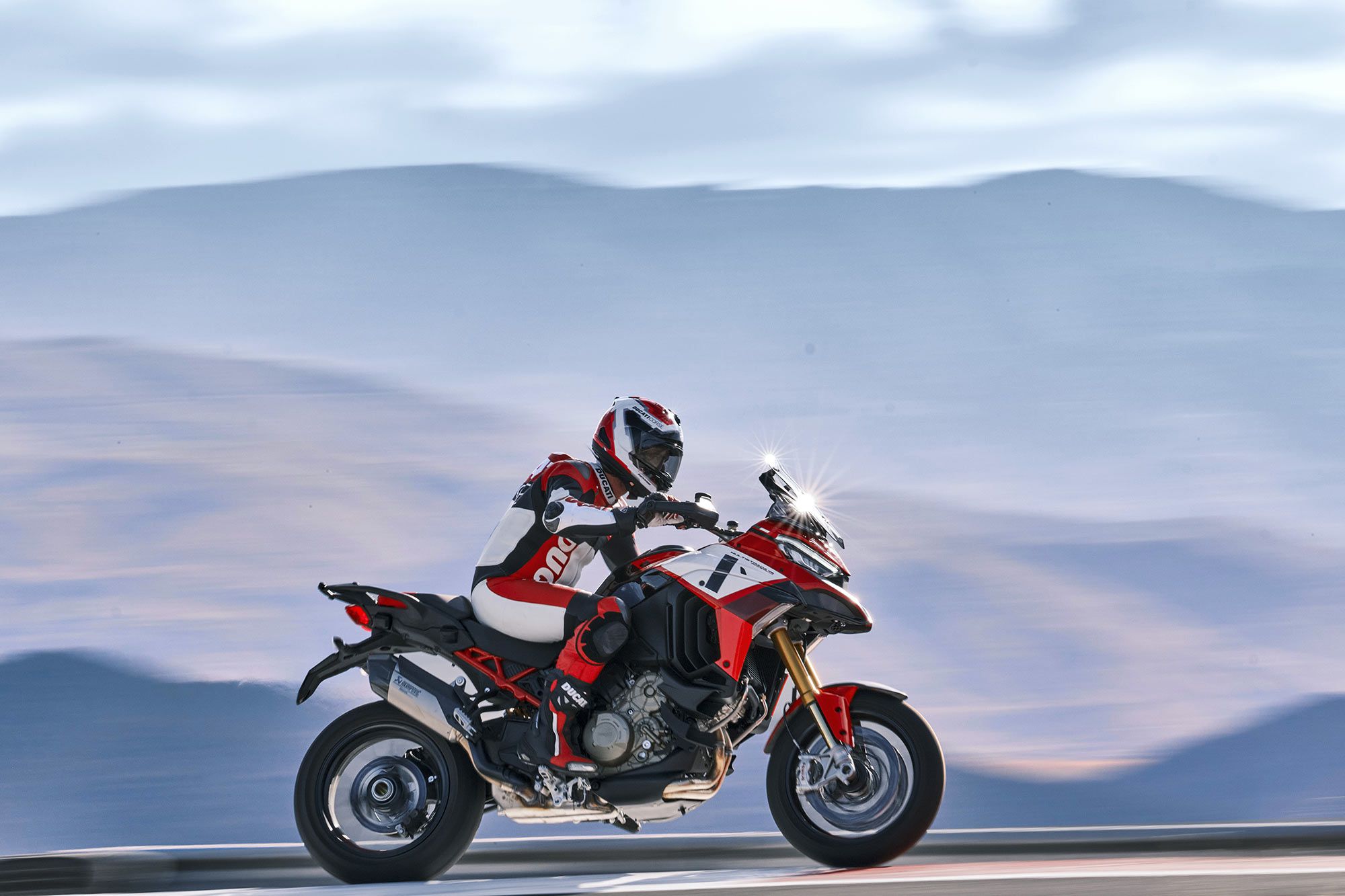 Anyone who’s ever ridden Pikes Peak will immediately understand what this bike is about. The graphics are inspired by the Desmosedici GP ’21. (Ducati/)