Feast Your Ears On This 400 Horsepower Supercharged Suzuki Hayabusa 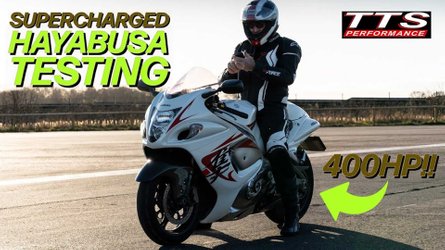 The supercharger specialists at TTS Performance absolutely love what they do, and it shows. Check out their YouTube channel and you’ll see (and hear) all kinds of amazing work in the service of more power and speed. Take this brilliant 401-horsepower Suzuki Hayabusa, which TTS recently took to its nearest airstrip to put through its first round of testing.

The TTS Performance supercharger seen here is a work in progress, as TTS’ Richard Albans explains at the beginning of the video. When it’s complete, there will be a nice CNC-machined cover over the belt—but for the purposes of filming, it was left exposed while he walked us all through the bike. There’s an intercooler tucked up under the tank, and the tank is raised about 40mm over stock fitment to promote airflow. There’s also a little side-mounted oil reservoir for the supercharger that’s mounted on the left.

With the supercharger in place, it’s clearly time to take this ‘Busa out for its first test runs. Still, if you’ve got a dyno in your shop, of course you’re going to want to get some hard data to see what kind of power you’re making. I mean, why wouldn’t you? Naturally, that’s exactly what Albans did.

Hopefully you’ve already got some good headphones delivering the sounds from this video straight into your ears, because the next bit is the dyno run. How did the snowy, white peregrine falcon do? How does 401 horsepower and the smoothest power curve ever grab you? Pleased with the prospect, it’s off to the airstrip to do some speed runs and put the ‘Busa through its paces.

While it’s cool that TTS has a nearby airfield that lets it do some all-important testing, the one bad thing about sharing an airfield with actual aircraft is that, well, they want to use it, too. Thus, the ‘Busa didn’t get too many good runs in before a chopper landed and put a stop to all their fun for the day. While Albans reported that it got up to about 145 mph at about half-throttle, there were no quarter-mile times to be had on this day.

Since this is only the first test, of course, there will be more in the future. Currently, the ‘Busa is set up with its stock wheelbase, which has yet to be lengthened as it would be to make a good drag bike. It’s also sitting at stock ride height, and has yet to be lowered. However, Albans reported that although it’s extremely powerful, and the front wheel wants to lift in every gear, it’s also extremely easy to control. It will be interesting to see how this bike develops after TTS does some additional tweaking and testing in the future.