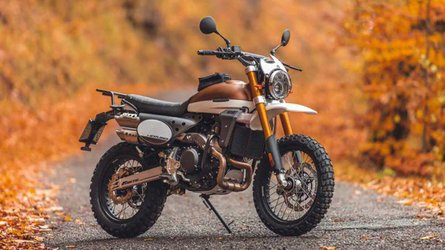 Italy’s Fantic Motor has been making moves over the past few years. In 2021 alone, the brand acquired Motori Minarelli from Yamaha, released new enduro models, and announced its 2022 Dakar Rally campaign with Franco Picco. Of course, the firm’s stalwart Caballero line received updates all the while, but the firm also dabbled in beginner electric scooters with the TX2 and rally machines with the XEF 450 Rally.

“Fantic is growing exponentially, both in terms of motorcycle products, e-bikes, and solutions for sustainable mobility, and in terms of turnover in all sectors,” explained Fantic CEO Mariano Roman. “In 2021, the acquisition of Motori Minarelli was a winning choice in the national and international scenario and further contributed to the acquisition of value and market share for our Group.”

Fantic’s future looks just as bright in 2022 as well. With a factory team entering the 2022 MXGP race series and Tucker Powersports distributing Fantic e-bikes in the States, the company is further diversifying in the new year. The Treviso firm already has already proved itself in these sectors as well, with the brand’s e-bike sales in the U.S. growing by 645 percent and the Fantic race teams capturing the 2021 MX Junior 125 World Champion title along with victories in the EMX 250 and 2T European Championship.

“In 2021, we once again recorded record growth in turnover,” added Roman. “A result that far exceeded the best expectations, highlighting and rewarding Fantic’s liveliness and its ability to innovate.”

Along with celebrating Motori Minarelli’s 70-year anniversary, Fantic looks to carve out an even bigger market share in 2022.