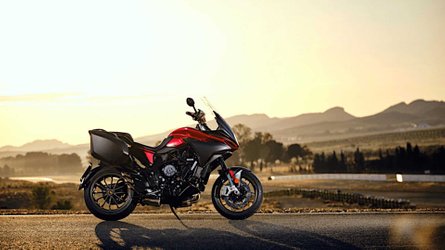 MV Agusta’s certainly in need of a down-and-dirty machine in its lineup. Right now, the closest thing we have to an adventure-tourer is the Turismo Veloce, a sport-tourer. MV has gone on record in the past about more models in the lineup, though, not a lot of specifics were stated.

According to Visordown and Motorrad, we better prepare for another adventurer that’ll be revealed soon enough. The Italian brand has yet to get a grip in the adventure market, and it appears that EICMA 2021 will host the reveal of MV’s first real go-everywhere bike.

Visordown stated that it’s unable to post photos of the test bike. I imagine there’s something juicy going on in their newsroom. Either way, it seems that our colleagues in the UK have something on their hands, and they also stated that it will not be based on the Turismo Veloce’s design. No parts-bin parts for this new bike, it seems. The UK-based news outlet also mentioned that the chassis looks completely new.

While the frame is new, the engine the bike will run is still expected to be the Italian marque’s 800cc inline triple-cylinder engine that can also be found on the Turismo Veloce, sources claim. The adventurer was also spotted with a 21-inch front wheel with radially-mounted Brembo brake calipers. Another addition, according to sources, includes a full-length skid plate that runs from the front of the engine sump to the start of the rear wheel.

So it’s without a shadow of a doubt that our European sources got hold of a spy shot of the bike. Furthermore, the launch date of said adventure-tourer is likely to take place in EICMA 2021 this November. Just a few more winks until we all get to see MV’s take on a piece of motorcycle art that’s ready to get a bit of mud on its luscious bodywork.

Build a chopper custom motorcycle the way YOU want it!