Energica Motor Company To Expand U.S. Presence By The End Of 2021 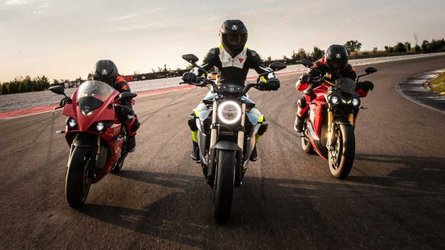 In mid-September, 2021, American financial technology firm Ideanomics announced its plan to acquire a 70-percent stake in Energica Motor Company. Earlier in the year, Ideanomics had purchased a 20-percent stake, based on Energica’s strong performance and technological development in the electric motorcycle market worldwide.

The firm apparently liked what it saw enough to want to take a bigger stake in Energica, which is pending regulatory approval as of September 20, 2021. However, that isn’t the only plan that Ideanomics has up its sleeve for Energica in the coming months. In fact, by the end of 2021, Ideanomics says it plans to more than double U.S. Energica dealer numbers by the end of the year.

That’s 2021, not 2022. Ideanomics made this announcement on September 20, 2021, which is just 10 days out from October. Three months might seem like an awfully short amount of time to double Energica’s American dealership presence—that is, if you don’t know how many dealerships Energica currently has in the country.

As of September 21, 2021, Energica’s North American HQ is located in Mooresville, North Carolina. It also has a separate Dealer and Service Center located in South San Francisco, California. Beyond that, it lists just 12 additional dealers in the U.S. That includes three each in California and Florida, with the remainder either being solidly on either the west or east coasts of the country. That leaves only AF1 Racing in Austin, Texas holding down the entire middle section of the nation.

Don’t get us wrong; we’d love to see more Energica dealers and availability within the U.S. However, this is a great example of why seeing the numbers behind descriptive language matters. For its part, Ideanomics also sees this growth plan as setting the stage for further expansion of Energica in 2022. So far, it hasn’t given further details about what that means, but it’s certainly something to look forward to.

“Without question, it is the exhilarating acceleration and seamless power that riders experience on a test ride, that finally converts them from a conventional internal combustion bike to one of our electric motorcycles,” U.S. CEO of Energica Motor Company, Stefano Benatti, said in a statement.

“Now that we can expand our dealer network we will be able to offer this experience to more U.S. riders than ever, furthering our goal to help transform the motorcycle business for years to come,” he continued.

“The vision that Ideanomics has for Energica and their ability to help propel our growth has provided a unique opportunity to quickly scale our product throughout the U.S. and serve as a template for future dealer expansion.  This is the first of many steps we hope to take as Ideanomics and Energica partner together,” he concluded.

What's exiled MotoGP driver Andrea Iannone up to these ...