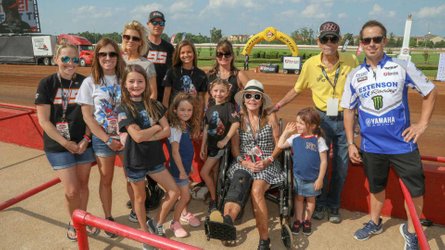 On December 29, 2021, Earl Hayden, one of the most recognizable faces in motorcycle racing, died after a long and brave battle with cancer. He was 74 years old, and was reportedly surrounded by family and friends, as he regularly was throughout his life. Earl was the father of American motorcycle racers Tommy, Nicky, and Roger Lee Hayden, and was a racer himself in his younger years.

For those familiar with Nicky’s racing career, it was Earl who first adopted the number 69. Nicky, of course, went on to seal that number in racing history he rose up to win the 2006 MotoGP world championship. During Earl’s 20 years of dirt track racing, he jokingly said he chose the number 69 in the first place because he wanted a number that could be read just as easily upside-down as right side up.

Both Earl and his wife, Rose, were racers—and both parents actively encouraged their kids to pursue their racing passions where it led them, as well. Not only did they support their kids in learning to ride and go racing outside the home, but they built a dirt track on their property so their kids could just go out and ride whenever. Sons Tommy, Nicky, and Roger Lee went on to pursue motorcycle racing at professional levels, while daughters Jenny and Kathleen veered toward tennis instead.

Like anyone bitten hard by the motorcycle bug, Earl’s other pursuits in life—which included breeding and selling race horses, operating a car wash, and selling cars—all helped to support his burgeoning motorcycle love. As his kids grew, Earl coached his future AMA champion sons into going pro as each one turned 16. One of the family’s proudest moments was the 2001 AMA Flat Track Springfield TT in Illinois. That’s when all three Hayden brothers took up all three steps on the podium for the first and only time in the sport’s history.

Earl was a friendly, familiar face (and voice) in racing paddocks, and the entire motorcycle racing world will forever be grateful for their time with him and his family. He is survived by his wife, Rose; his children, Tommy, Jenny, Roger Lee, and Kathleen; his brother, Marty; his sisters, Alice, Margaret, and Ann; and his seven grandchildren. Visitation and funeral services are planned in his hometown of Owensboro, Kentucky on Friday, December 31, 2021 and Saturday, January 1, 2022.

The family asks that, in lieu of flowers, any and all donations be made in Earl’s memory to the Nicky Hayden Memorial Foundation.