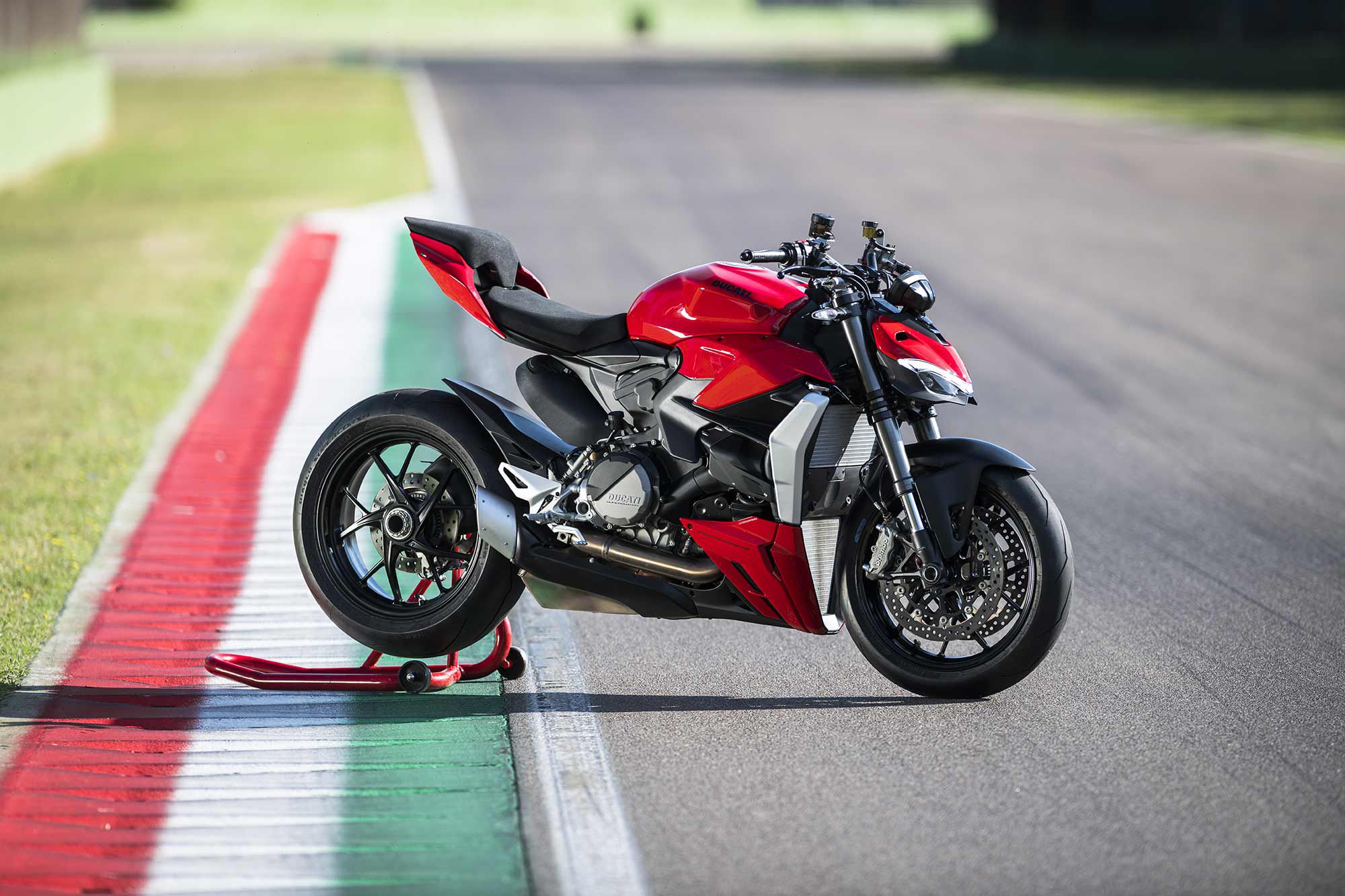 Reporting for duty, and ready to roll. Ducati’s new Streetfighter V2 is probably better in every way than the original. Hey, where’s the frame? (Ducati/)

Ducati’s naked superbike, the Streetfighter, was born in 2009 as a sibling to the 1098 Superbike, though it has always been perceived as a sort of Monster on steroids. It was powered by the same legendary 1,098cc eight-valve desmo V-twin as the Superbike, cranking out 155 hp. It featured a superbike-derived chassis with increased steering rake, was extremely fast, looked mean, and needed a strong hand to keep its aggressive manners under full control. In short, it was a real hot rod.

That original bike remained in production until 2014. Then, in 2019, it reappeared as the totally new Streetfighter V4, this time derived from Ducati’s Panigale V4. At EICMA 2019 it was voted “most beautiful bike on show.” The image of Ducati’s naked superbike was gloriously restored.

Now, for 2022 the Streetfighter line expands with the addition of the new Streetfighter V2 and Streetfighter V4 SP. Given the public’s positive response to the existing bikes, the new machines’ styling and chassis remain basically unaltered, but there are some significant upgrades. 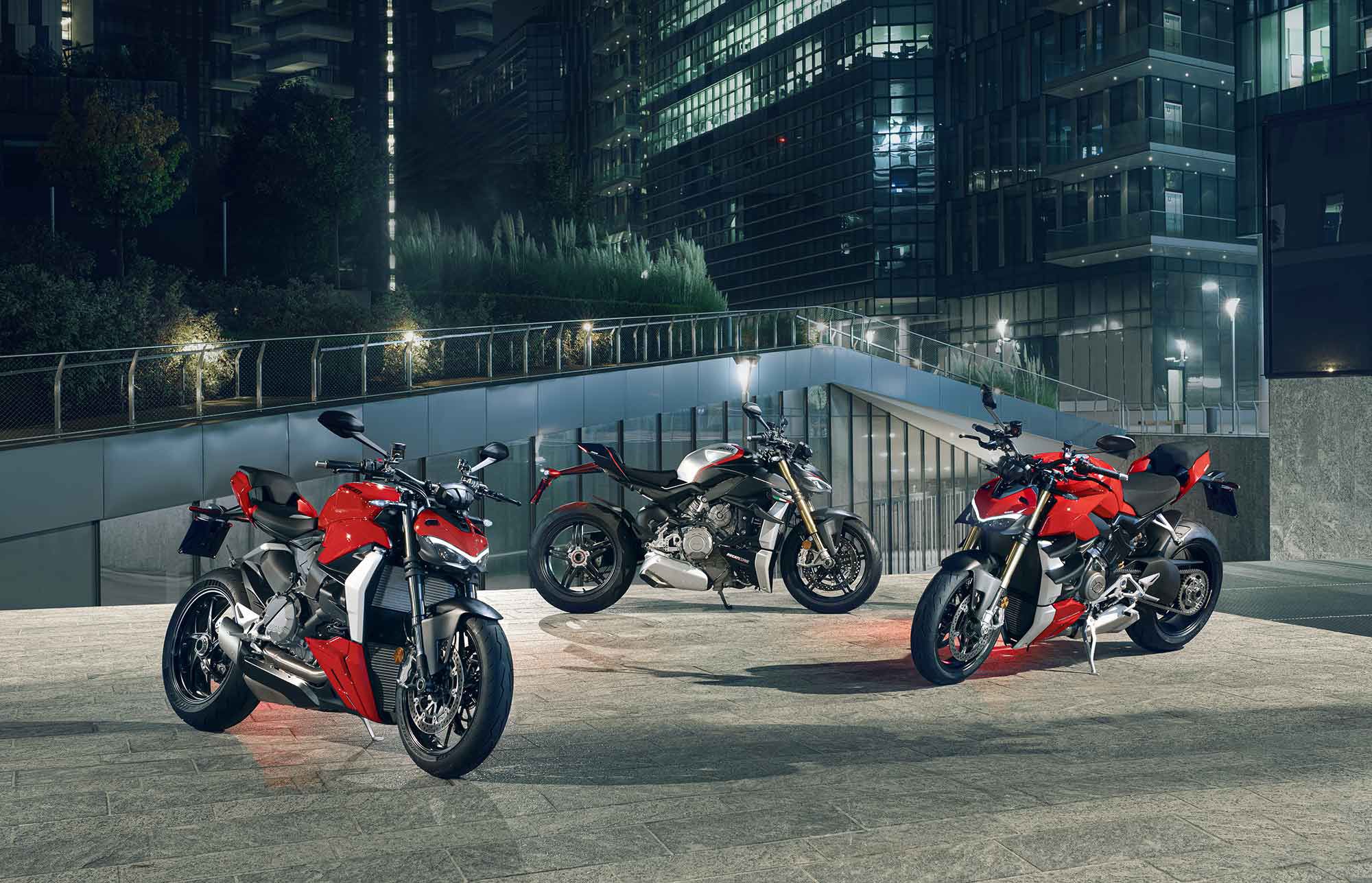 Family portrait: Ducati’s Streetfighter line is a delicate balancing act between the racetrack-bred superbikes and supersports, and the Diavel cruisers. The Streetfighters get both the style and performance right. (Ducati/)

The Streetfighter V2 is a high-tech return to the original, but now the engine is from the supreme V2 Superquadro in 955cc edition, the same that powers the Panigale V2 supersport. This engine is designed to act as an integral chassis stressed member: rather than a conventional frame, a “pyramidal” cast aluminum structure carrying the steering head and front suspension bolts directly to the engine’s cylinder heads. This results in a very rigid “chassis.” A light rear section supports the seat, while the bike’s single-side swingarm pivot is solidly located, mounting directly to the engine/transmission housing.

Such a lean construction is one of the reasons the bike weighs only 392 pounds dry, giving it a very attractive power-to-weight ratio. The short-stroke 955cc engine (100mm x 60.8mm) generates 153 peak horsepower at 10,750 rpm along with 74.8 pound-feet of torque at 9,000 rpm—virtually the same power of the original, larger 1,098cc engine, plus it conforms to current Euro 5 emissions standards.

Compared to the Panigale V2, the Streetfighter V2′s swingarm is 16mm longer, putting more load on the front end and ensuring better stability at high speed. This is a much better choice than with the original Streetfighter: It means the steering rake is the same at 24 degrees and 3.7 inches of trail, while the wheelbase grows to 57.7 inches. Seat height is an above-average 33.3 inches. 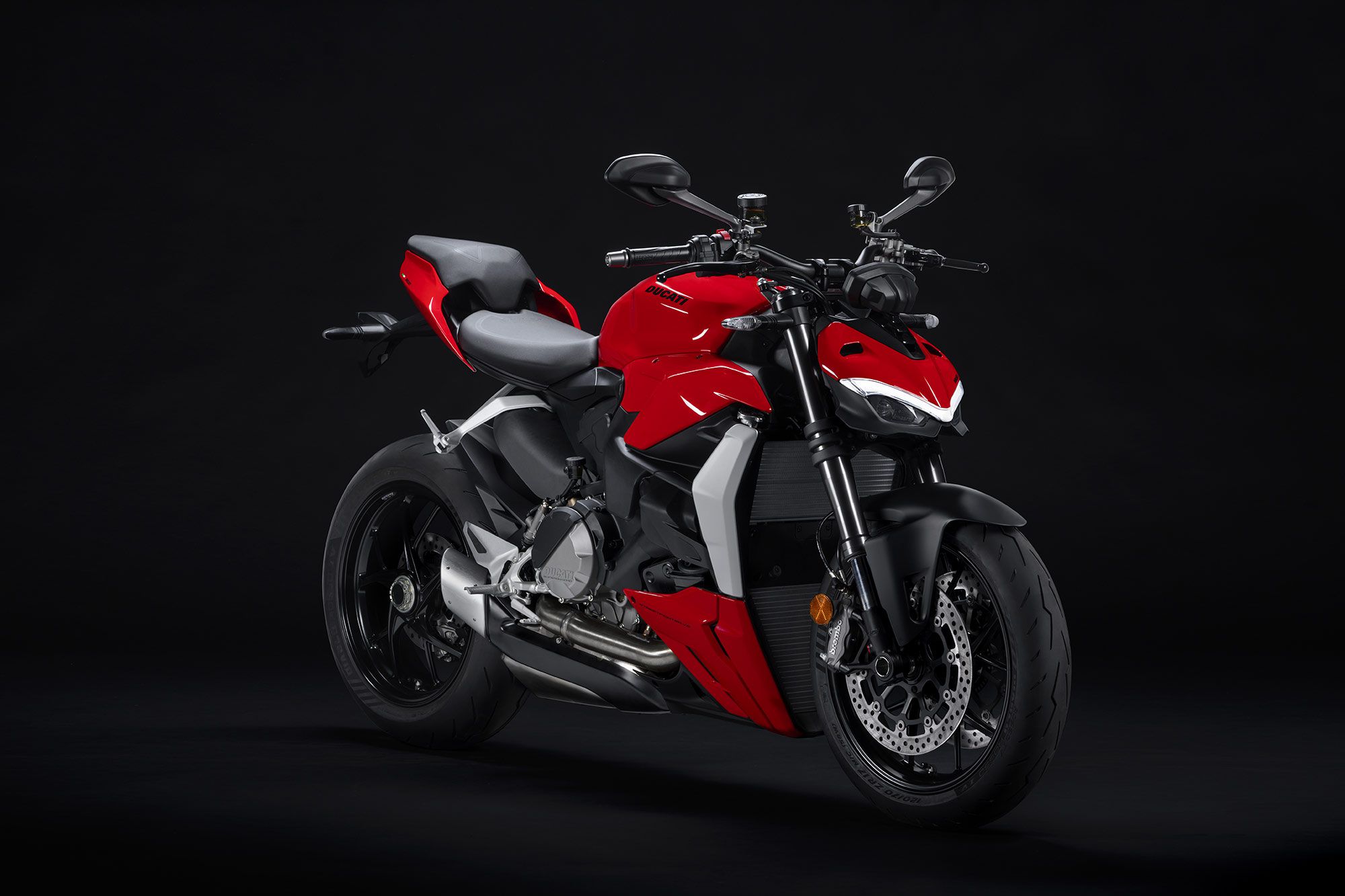 The new Streetfighter V2’s engine is a great choice. Even though it’s smaller than the original Streetfighter’s 1,098cc powerplant, it makes the same horsepower and meets current emissions standards. (Ducati/)

To better suit the Streetfighter in its natural environment (the streets), the final-drive ratio is lower, changed from the 15/43 of the Panigale V2 to a livelier 15/45. The bike rolls on nice-looking five-spoke aluminum wheels shod with a Pirelli Diablo Rosso IV radial 120/70-17 front and a 180/60-17 rear. The front suspension is a 43mm male-slider Showa fork, while a Sachs rear shock collaborates with the swingarm; both units are fully adjustable. Brakes are common with the Panigale V2—twin 320mm rotors and Brembo M4.32 four-piston calipers. 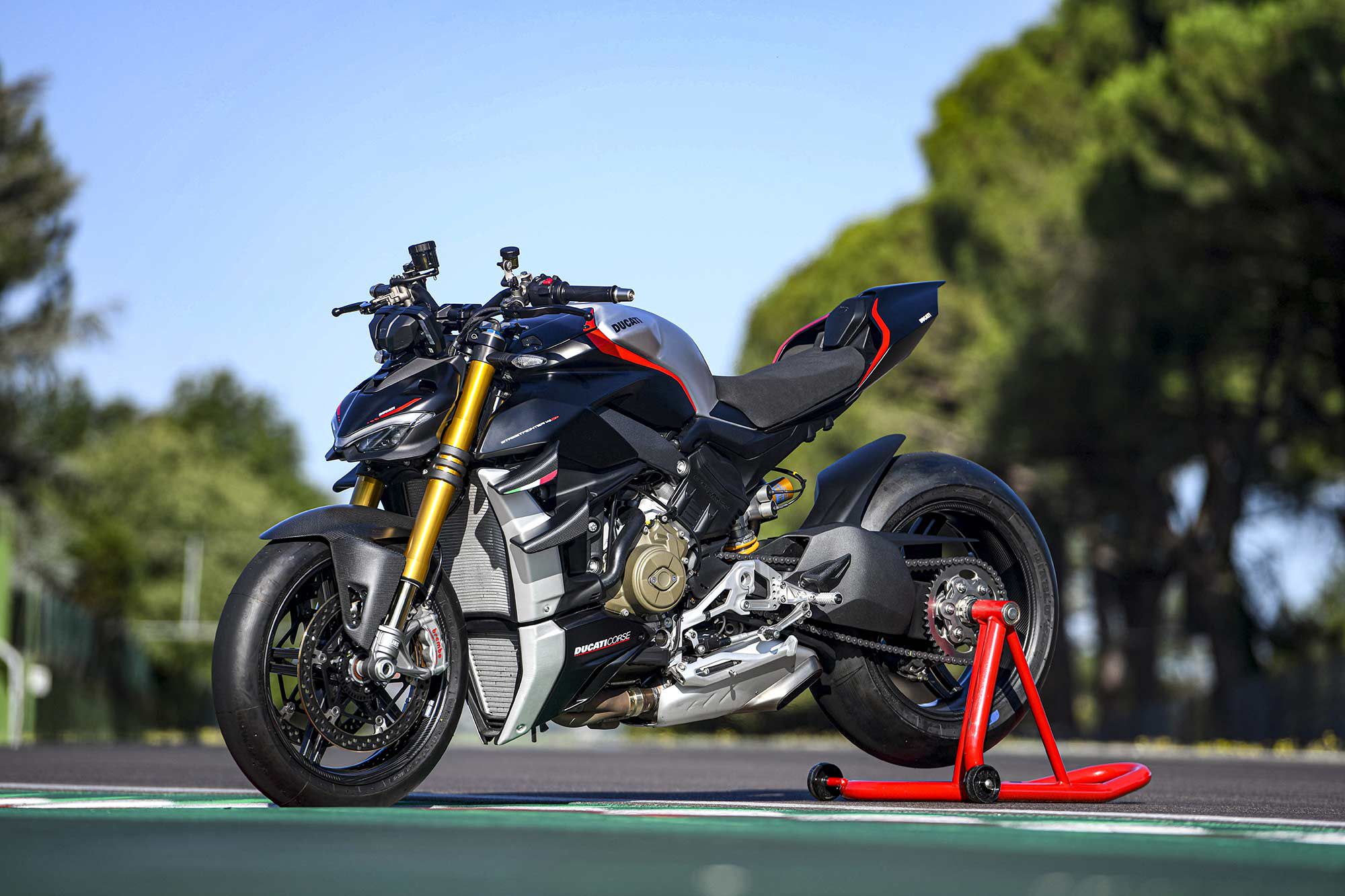 Now, the Streetfighter V4 SP. This is the Ducati’s most exclusive Streetfighter ever, a limited, numbered edition based on the Streetfighter V4 S. Most impressive, the SP rolls on carbon fiber wheels, a choice that helps reduce the bike’s total weight by 7 pounds and which drastically cuts the wheels’ gyroscopic mass for superior agility and steering response. While Ducati did not announce the make of these wheels, their clean overall design suggests they might be the latest product of Austria Action Composites Hightech, a very advanced carbon fiber specialist. (Watch this website for a more extensive story on the company in the near future.) Chassis refinements include an Öhlins 43mm male-slider NIX 30 fork and TTX 36 shock with adaptive electronic control Smart EC 2. Braking system is based on twin 330mm rotors with Brembo Stylema four-piston calipers teamed with Bosch cornering ABS. 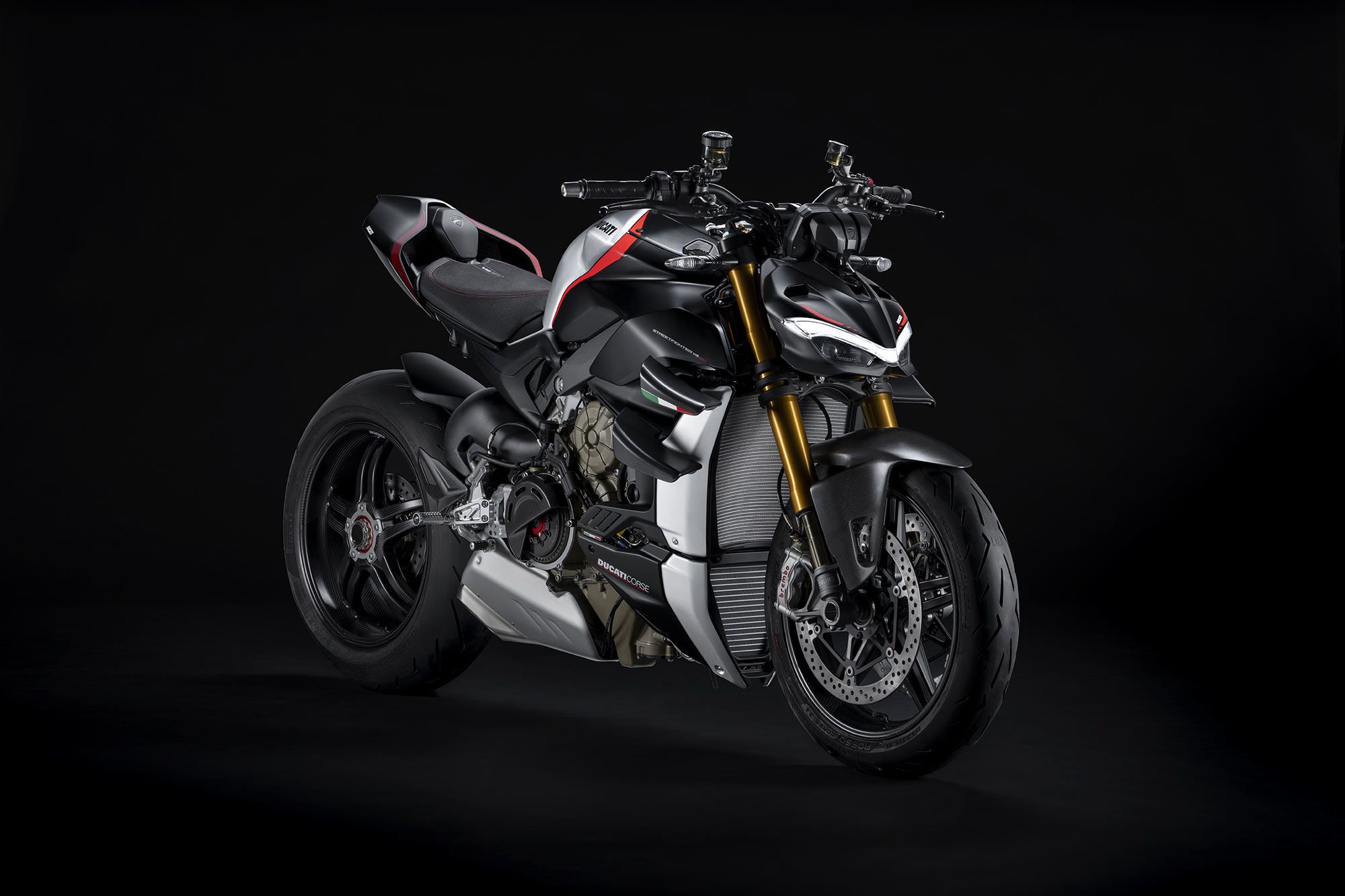 The Streetfighter V4 offers better suspension front and rear, but the real standout feature has to be its carbon fiber wheels. (Ducati/)

The Ducati Desmosedici V4 is rated at 208 hp at 13,000 rpm and 90.7 pound-feet of torque at 9,500 rpm. With its power-to-weight ratio exceeding 1 hp per kilogram, the new Streetfighter V4 SP promises to be a very hot performer indeed. With its minimal bodywork and aggressive attitude, the Streetfighter V4 SP screams hooligan bike. But with its Ducati V-4 engine, it promises more. Premium hooligan? (Ducati/)