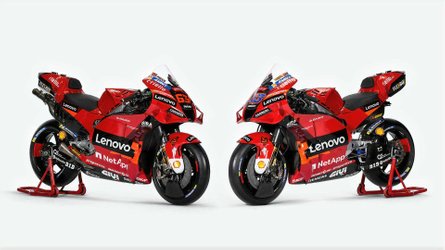 Over the last weekend in January, 2022, the Ducati Lenovo MotoGP team was on hand in Sepang, Malaysia for the season’s first testing session. Unfortunately, Jack Miller had previously tested positive for COVID-19, and so was unable to attend the event. As a result, Ducati had already announced that it would delay its scheduled MotoGP team launch event, which had originally been planned to take place on January 28.

While the new Ducati Lenovo MotoGP team launch is currently scheduled for February 7, 2022, that didn’t stop the Ducati MotoGP team from offering a sneak peek at the new liveries prior to the official unveiling. Every season, the first testing weekend of the year is always a great time to shake off the winter cobwebs and get your head right for what’s to come. It’s also kind of like back-to-school time is for kids, where you absolutely want to dress to impress.

Thus, Ducati gave us all an eyeful of the GP22 in racing trim, as well as in the all-black livery that test rider Michele Pirro rode at Sepang over the weekend to gather valuable data on the particulars of the new bike’s performance. While Pirro’s test machine is primarily black, the standard Ducati Lenovo GP22 livery is primarily Ducati red, through and through.

There are some key black elements to break it up, so you don’t run into the problem of too much red in the design. The Lenovo logos, which consist of white text on a black background, definitely help. Other team sponsor logos also help to keep the red from becoming overwhelming, including the Siemens, D.I.D., and Givi logos down at the belly, as well as the Flexbox block on the tail. The saddle and back pad are also finished in black, which helps add a sense of visual balance to the overall composition.

Of course, MotoGP is a team sport—and this Sepang testing weekend also marked Ducati MotoGP team manager Davide Tardozzi’s birthday. In addition to giving us all a tiny taste of the new GP22 bike, the team also made a very nice photo post on Instagram to wish Tardozzi the best. Here’s hoping the man had an excellent birthday, and also looking forward to an excellent MotoGP 2022 season for all.