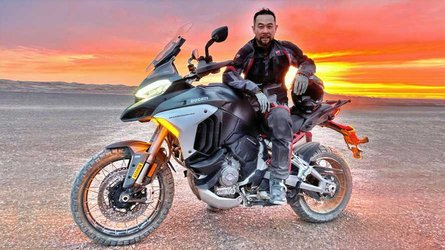 On December 15, 2021, Ducati kicked off its newest YouTube video documentary series, Ducati Multistrada V4 Silk Road Grand Tour. Over the course of five episodes, Ducati says the series will explore various parts along the historic Silk Road trading route through China, concluding with the fifth episode set in inner Mongolia. One episode will be released per month for the next several months, taking Multistrada V4, Ducatisti, and moto travel enthusiasts well into 2022.

Each episode will feature a different rider or group of riders, giving different views on the various regions of China they traverse with their Multistrada V4s. In the first episode, multi-year Dakar Rally competitor Zhao Hongyi takes his wife and young daughter to go meet his former Wupu Dahaidao Dakar Rally teammate, Zaker Yakp, in Xinjiang.

Zaker, whom Zhao specifically mentions is Uighur, both accompanies him riding and grills the group a tasty lunch while they’re out and about. It’s both beautiful and unsettling if you’ve been paying any attention to international news involving Xinjiang and China’s mistreatment of the Uighur people. Some YouTube commenters have noted this as well, although a quick check of Ducati’s other social media channels shows no other such comments on Twitter or Facebook, and there’s no way to be certain if such comments ever existed on other social media platforms or not.

The 10-minute chapter of Ducati’s Silk Road documentary focuses on Zhao and his adorable family, with Zhao spending a few sessions riding through some truly breathtaking natural scenery on his Multistrada V4. His wife and daughter are in the backseat of a Volkswagen minivan, presumably with the film crew who recorded the documentary that Ducati said took around two months of filming.

The chapter mentions Xinjiang directly in the episode title, but unless you followed Zhao closely during the five Dakars he’s competed in so far, 2020 Dakar teammate Zaker’s entrance may have come as a surprise. Yakp has racked up three wins in the Taklimakan Rally so far and came in sixth in the rookie class in his Dakar debut—so it’s clear that he’s a formidable talent in his own right. Overall, though, there’s both beauty and extreme disquiet in watching this video.

In addition to allegations that China is committing genocide against Uighur people by multiple human rights organizations and governments around the world (including the U.S.), a new report by the Australia Strategic Policy Institute makes specific claims about “two Chinese state-linked networks seeking to influence discourse about Xinjiang across platforms including Twitter and YouTube.” It goes on to add that “this activity targeted the Chinese-speaking diaspora as well as international audiences, sharing content in a variety of languages.”

Part of the way the ASPI says this is done is by inviting foreign media content creators to come make some gorgeous content in Xinjiang. The caveat, ASPI says, is that this content should promote whatever point of view the state wants.

To be clear, we can’t say whether that’s what happened here. However, we can say that it’s awfully difficult to just sit back and enjoy what would otherwise be a cool moto travel documentary in an undeniably beautiful place, all while pretending that nothing bad is happening just offscreen from what we’re being shown.