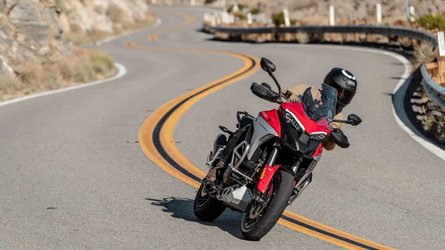 As you’ve probably heard, motorcycling has been helping an awful lot of people get through the past few years. Take Ducati, which, in 2021, experienced the single-best sales year in the company’s entire history. I mean, that isn’t just a resurgence from the overall weirdness of 2020—surely that’s something else entirely.

It’s worth noting that, while Ducati’s total sales of 59,447 bikes worldwide were massive, American riders bought more new Ducs than any other country in 2021. A total of 9,007 bikes sold in the U.S., which represents a 32-percent rise over sales in the country throughout 2020. Italian riders bought 8,707 Ducatis that year—although of course, Italy would clearly win any numbers game involving a per-capita tally of Ducati ownership.

Ducati North America’s CEO, Jason Chinnock, has some thoughts about why the company’s sales are doing so well. “I think that the pandemic has kind of shook the cobwebs out of a handful of people where they decided, listen, if this is the way the new reality is going to be with a new world, I’m getting out and living. And no better way to be able to experience that than to do that on a motorcycle,” Chinnock told Yahoo!Finance.

Ducati’s sales rose, as did motorcycle sales overall—and Chinnock says there are two big reasons why. He cited a 19 percent increase in returning motorcyclists as one piece of the puzzle. People who may have ridden when they were younger, but then gotten back into it in recent time make up some of those numbers. Those elusive new riders make up a bunch more, though—and of course, that’s the segment that all OEMs can agree that they really want to grow for the future.

While that all speaks to why the industry is seeing this sales resurgence overall, what specifically drove Ducati’s sales? Chinnock credits dealer network expansion into underserved areas, as well as Ducati’s overall investment in and development of products that hit a sweet spot for riders. In the U.S., the number-one selling bike for 2021 was the Multistrada V4—which Chinnock says represents a great balance of convenience, comfort, and safety through technology.

Naturally, questions turned to Ducati’s electric bike development, and Chinnock didn’t give too many details on that since the company overall has been keeping things under wraps on that front. However, he did say that “what we’re going to develop in terms of the expertise and the technology through that racing series will be utilized for future street motorcycles.” He also went on to add that “Autonomy isn’t on the short list right now because, I mean, quite candidly, motorcyclists like to ride the motorcycles.”