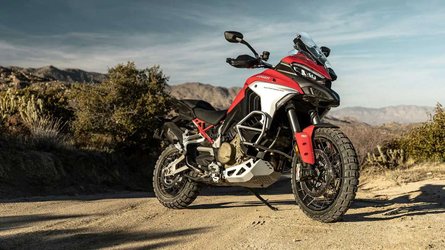 Despite the ongoing pandemic, supply chain issues, and resource shortages, 2021 was an exciting year for motorcycle enthusiasts. From new models like the Triumph Trident 660 and Aprilia Tuono 660 livened up the middleweight ranks while heavily-revised heavyweights such as the Suzuki Hayabusa and Triumph Speed Triple 1200 RS kept long-time riders coming back.

After tallying the ballots, the group placed the 2021 Ducati Multistrada V4 S at the top of the pile. With a superbike-derived, 170-horsepower V4 at its core, packed to the gills with tech, and more off-road capabilities, the latest Multistrada certainly lives up to the Bike of the Year title. However, Harley-Davidson‘s dark horse and first entry into the adventure bike market, the Pan America, only missed the top spot by one point. In third, Yamaha’s Tracer 9 illustrated the importance of adventure and sport-touring models in 2021.

Outside the top three, the middleweight renaissance makes its mark with the reworked Ducati Monster in fourth, Aprilia’s RS 660 taking fifth place, and the Trident 660 at sixth. The updated Yamaha MT-09 represents for the heavy middleweights at seventh place, but the Speed Triple 1200 RS, Honda Africa Twin 1100, and the Tuono 660 tie for eighth. In eleventh place, the Suzuki Hayabusa, BMW M 1000 RR, and BMW S 1000 R round out the best bikes of the year.

Yes, 2021 was an eventful and exciting year for motorcycle fans, but with more new models and revisions on the horizon, we can’t wait to see the best bikes that 2022 has to offer.

VR46 Racing Team will race MotoGP with Mooney as title ...