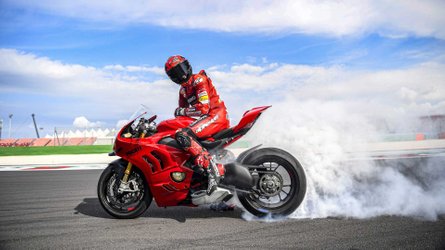 The 2021 MotoGP Rider’s Championship may have gone to Yamaha’s Fabio Quartararo, but Ducati claimed the Constructors’, Team, and Independent Team titles. With Ducati sweeping the podium for the first time at the final 2021 race in Valencia, Spain, the team is the envy of the MotoGP neighborhood going into the 2022 season.

Of course, success on the track is always welcome for CEO Claudio Domenicali, but the Ducati boss also has to consider how all that MotoGP technology funnels down to its production models.

“Really, there is no regret, I am totally satisfied with how we finished (the season),” Domenicali told Italian media outlet Gazetta. “For a company like us, the most important aim is to develop technology to be used on road models. And I believe that we have never been able to build a motorcycle like this year, I’m talking about the Panigale, so close to the racing one.”

While Domenicali has his eyes on both the company’s performance in MotoGP and the consumer market, he understands the direct link between the Desmosedici GP prototype and the road-going superbikes.

“I believe that Gigi has fully interpreted Ducati’s way of racing,” Domenicali noted. “We were the first to give wings in MotoGP and on a production bike. We like to get involved from an engineering and technological point of view to offer emotions, extraordinary both from the point of view of the guide and the beauty of the design. And racing is our advanced laboratory.”

Ducati’s 2021 accomplishments weren’t only on the road racing circuit, however. The Bologna firm introduced its latest middleweight adventure bike with DesertX in December, 2021. Calling back to the Lucky Strike Cagiva teams of the ‘90s, the new ADV tackles technical terrain with a 21-inch front and 18-inch rear wheel. However, the DesertX doesn’t suit the current Dakar classifications.

“We would very much like to get involved in sporting competitions off the asphalt,” added Domenicali. “We are already thinking about where we can bring the DesertX. Ducati and competitions are unique. The DesertX is something completely new to us, because it was developed completely out of the way.”

Ducati didn’t just get dirty in 2021, it also went to clean energy with its new electric motorcycle project. In 2023, the brand will take over as the sole supplier to the MotoE World Cup. As a part of the Audi Group, Ducati also enjoys a significant amount of support from its parent company.

“A lot. There is a Volkswagen Group battery competence center in Salzgitter, there is local expertise at Audi,” concluded Domenicali.

No, Ducati didn’t capture its first MotoGP Rider’s crown since Casey Stoner completed the feat in 2007. On the other hand, Ducati’s MotoGP accomplishments, exciting new consumer products, and MotoE involvement make the brand a winner in 2021.