Driving a UTV up the Mount Washington Auto Road 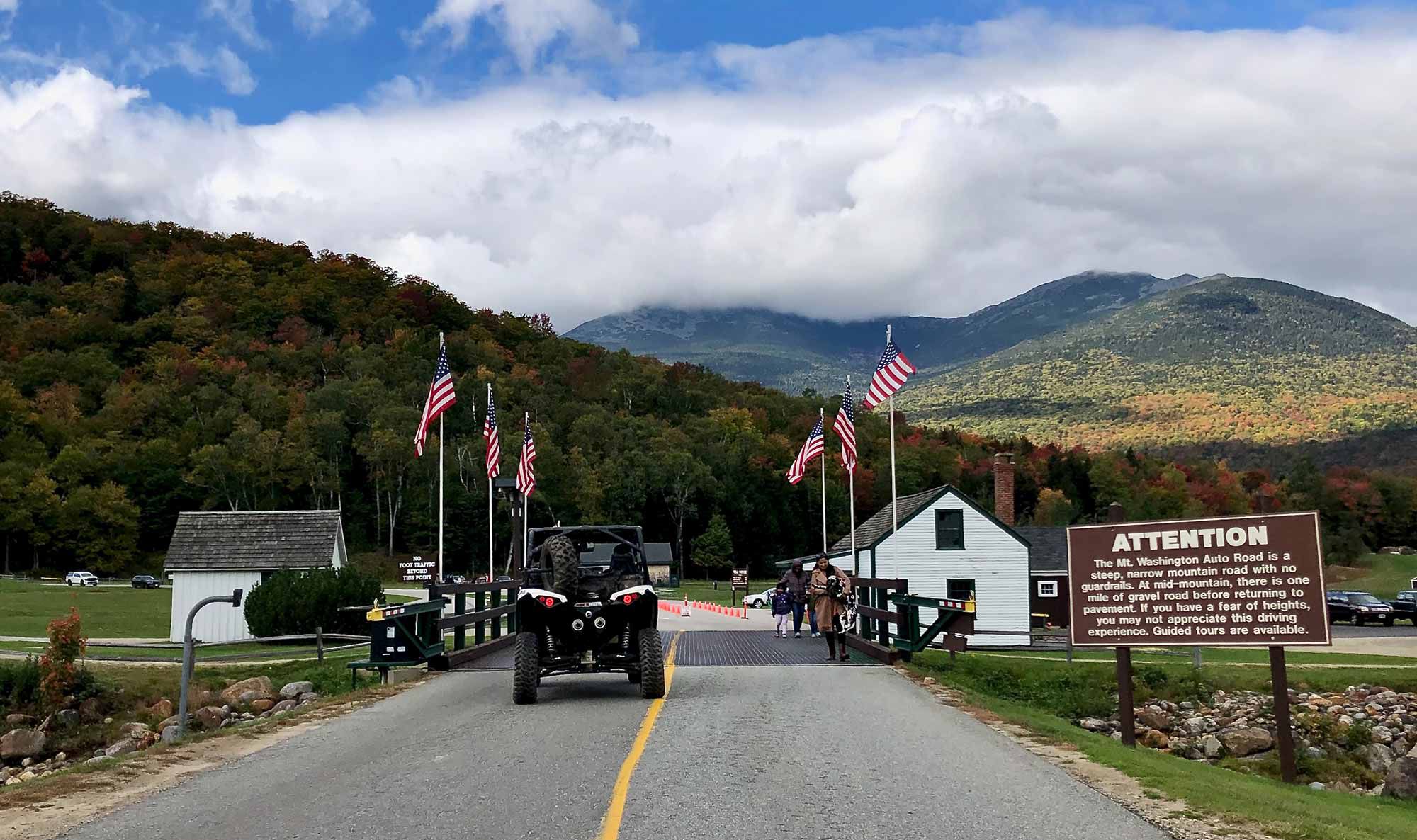 The start of the Mount Washington Auto Road. (Ross Ballot/)

The Mount Washington Auto Road climbs perhaps the most notorious peak on the East Coast, schlepping thousands of cars and motorcycles a year to the top of the 6,288-foot peak in the White Mountains. Mount Washington isn’t notable for its height—there are seven East Coast peaks that top it—but its steep terrain and spastic weather patterns have given it a fearsome reputation.

Until recently, though, the road was open only to street-legal vehicles most of the year, with just a once-or-twice-a-year event when ATVs and UTVs could summit the big mountain. Miss that window, and you’d have to wait a full turn of the calendar. But recently New Hampshire realized what a massive tourist attraction the hill is and added more calendar spots for powersports. From spring to fall, the road has 100 spots open for ATVs on most weekdays. To cap our season-ending trip to New Hampshire this fall, we pointed our machines to the White Mountain National Forest’s main attraction and looked to the sky. We arrived early in the morning on the final day of the year that Mount Washington was open to public traffic. The view was daunting. For a moment, we just stood in the parking lot looking up, staring. Stunning, vibrant fall colors faded to gray, then white. It was sunny and warm in the dirt parking lot staging area, but the ominous gray clouds and snow looming at higher elevations gave us second thoughts. A group of underdressed ATV riders pulled back into the parking lot, visibly shivering. We reconsidered how much warm-weather gear we’d need and saddled up for the adventure up the mountain.

Rolling up to the tollbooth by the visitor center, I remembered a sticker you see plastered over so many cars on this end of the world: “This Car Climbed Mount Washington.” I wondered if they made one for UTVs. If not, they should. It seemed as if half the traffic was ATVs and UTVs that day. 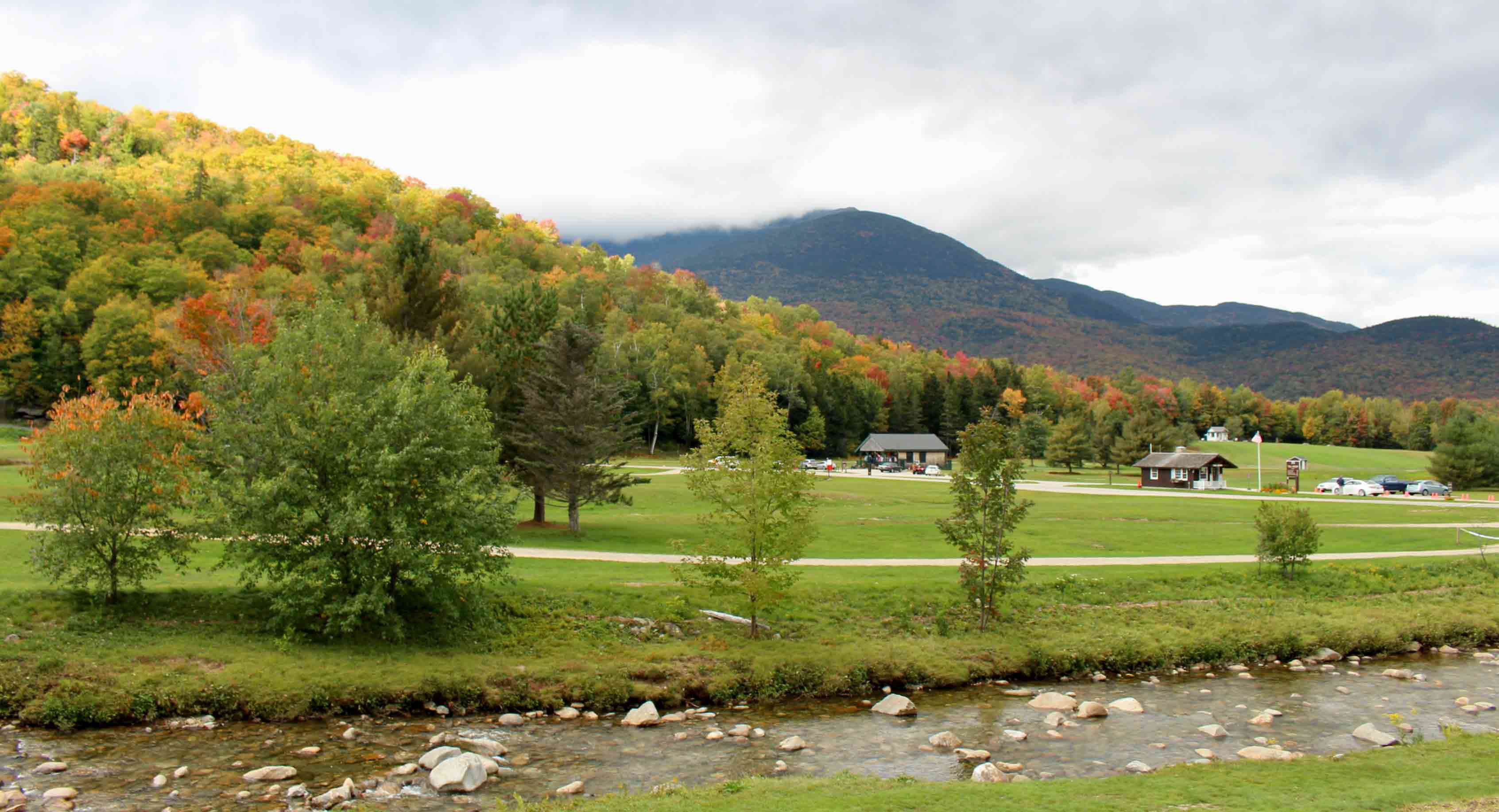 The middle building here is astride the entrance to the mountain road. Looking up, we only saw white. (Ross Ballot/)

We approached the man standing in the road at the entrance and handed him our passes.

“Only going halfway up today, so I’m going to refund you half your entry fee,” he said.

So we wouldn’t be climbing Mount Washington after all. On one hand, it was a bummer to miss the summit, on the other, it was obvious why we’d be denied. In the few minutes since we joined the line to head to the top, the snow had worsened. Our new friend told us there were white-out conditions from two-thirds of the way up. Not exactly safe when the consequence of missing a turn is a long free fall.

The first leg of the climb is a canopy of gorgeous foliage. (Ross Ballot/)

But once we were underway, we were treated to beautiful tarmac and 360 degrees of fall foliage. The Polaris RZR S 1000 and Can-Am Maverick 1000R that made up our little group reveled in the grip of a paved surface. The fall foliage meant the trees were still largely blocking the spectacular views, but every so often we got a peek of the glory through gaps in the canopy. The temperature dropped as our elevation rose, with the added stab of extreme wind howling through the roll cages and pressing on the windshields, roofs, and doors. Our parking lot wardrobe change was proving to have been a fantastic decision, and we pressed on, hammer down. 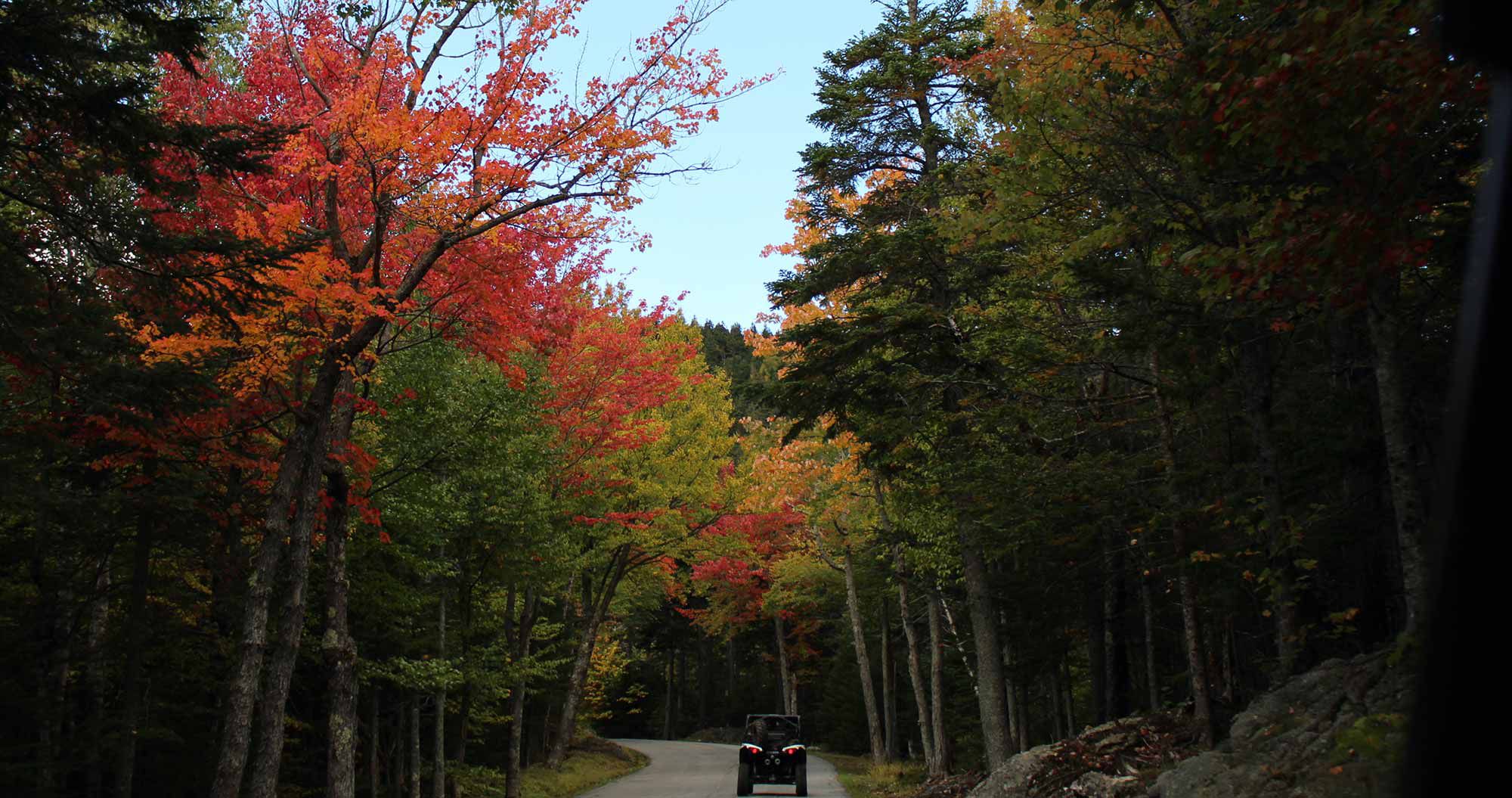 Wind speeds exceeded 40 mph, but the UTVs didn’t struggle, though the same couldn’t be said for those with a fear of heights or shaky nerves. We quickly caught up to tourists in passenger cars taking in the view, and we couldn’t blame them: It was breathtaking. The mountain slopes away and quickly descends, affording a look out over trees, rivers, and New Hampshire’s finest scenery. We could have sat there all day. 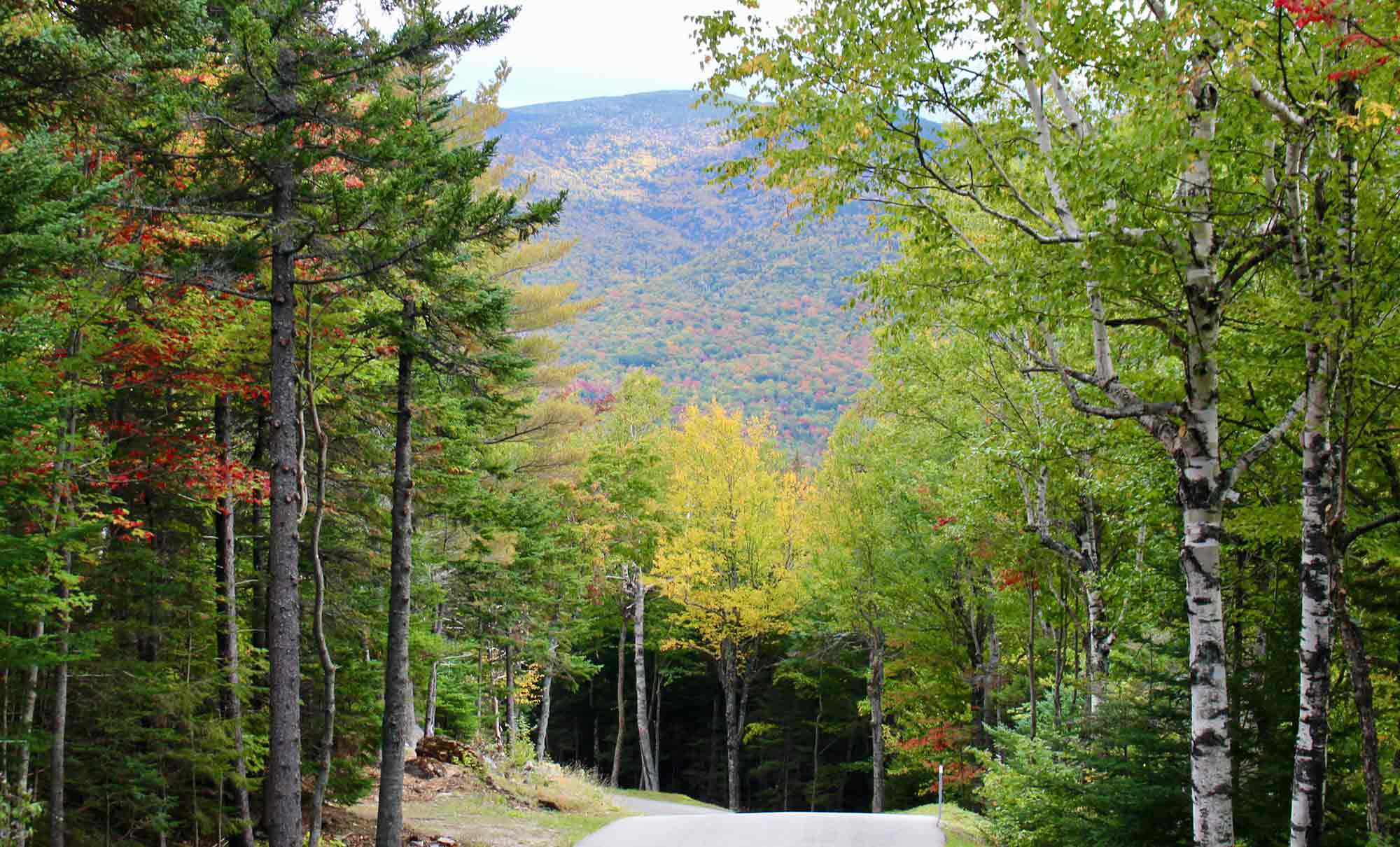 Full trees blocked our view in many places, but it was still fabulous. (Ross Ballot/)

We approached the tree line and our jaws dropped. We may have climbed only a few thousand feet, but it felt like we had landed on another planet. The trees there are bent over, their roots battling to stay in the earth against the force of the constant wind. Vegetation is sparse and there’s an eerie, Mars-like feel to everything. Cars coming down the road in the opposite direction look wholly out of place. The UTVs somehow look more adept, better suited to the terrain. Juxtaposed against the smooth tarmac, it’s a wild experience that gets stranger the higher you climb. The only signs of life were us and the few vehicles around us. Never once did we wish the road was unpaved. 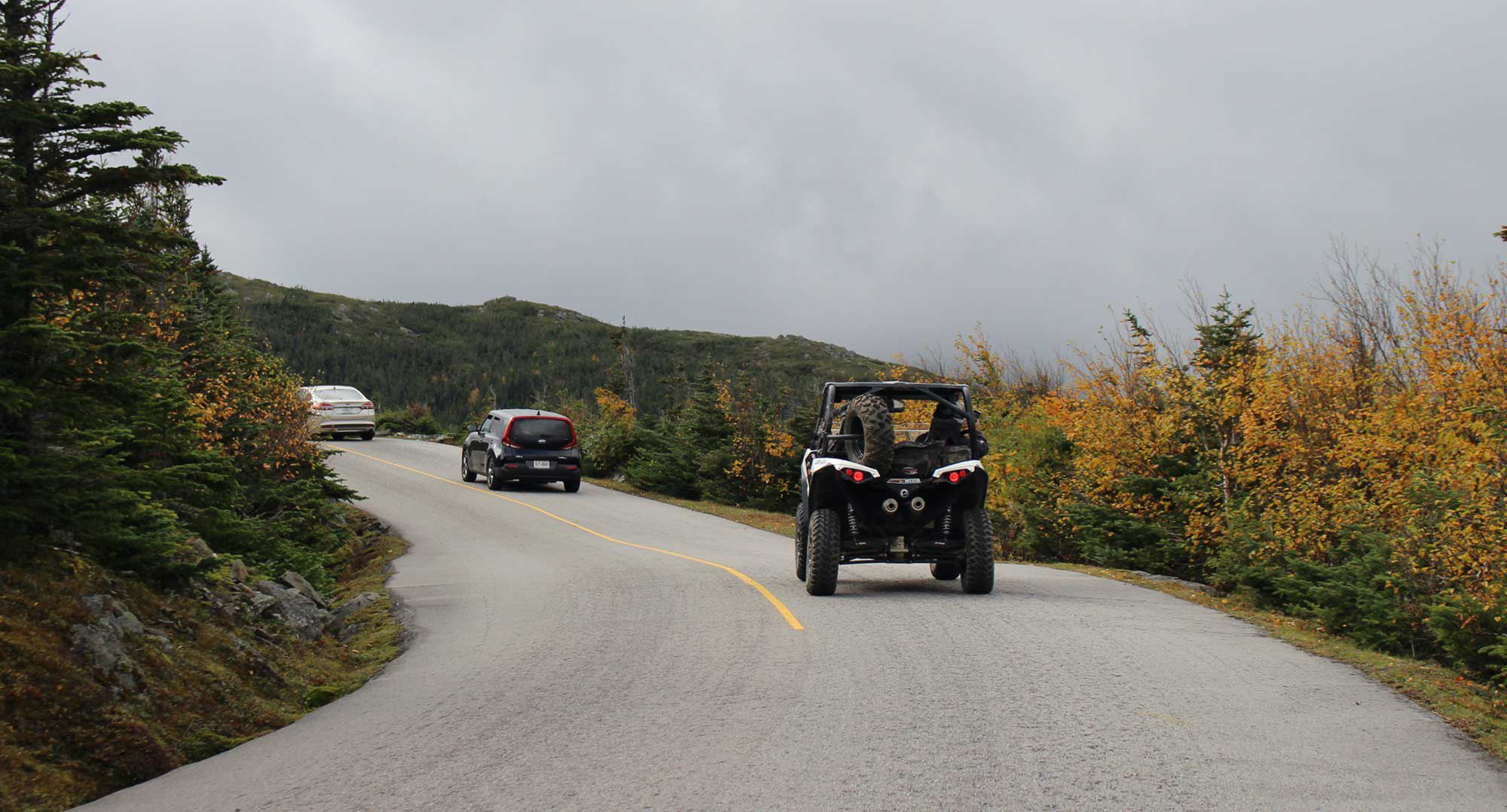 Conditions change rapidly. We quickly catch the cars ahead of us, their drivers apprehensive about the corners and elevation. (Ross Ballot/)

We rounded a final corner to see an official Mount Washington van parked perpendicular to the roadway, signaling that we had reached the end of the road for the day. We pull off into the overcrowded turnout and park, shutting the machines off. With the wind blowing so violently, it doesn’t get much quieter even with the absence of the engines running. One of us curses as a gust catches a side-by-side’s door, sending it flying against the hinges, bending them slightly. We walk around, taking in the amazing scenery and the madness that is the fall floor below and the winter whirlwind above. It’s only five minutes of staring and picture taking before all of us have hit our limit. Back in the machines, we point downward. 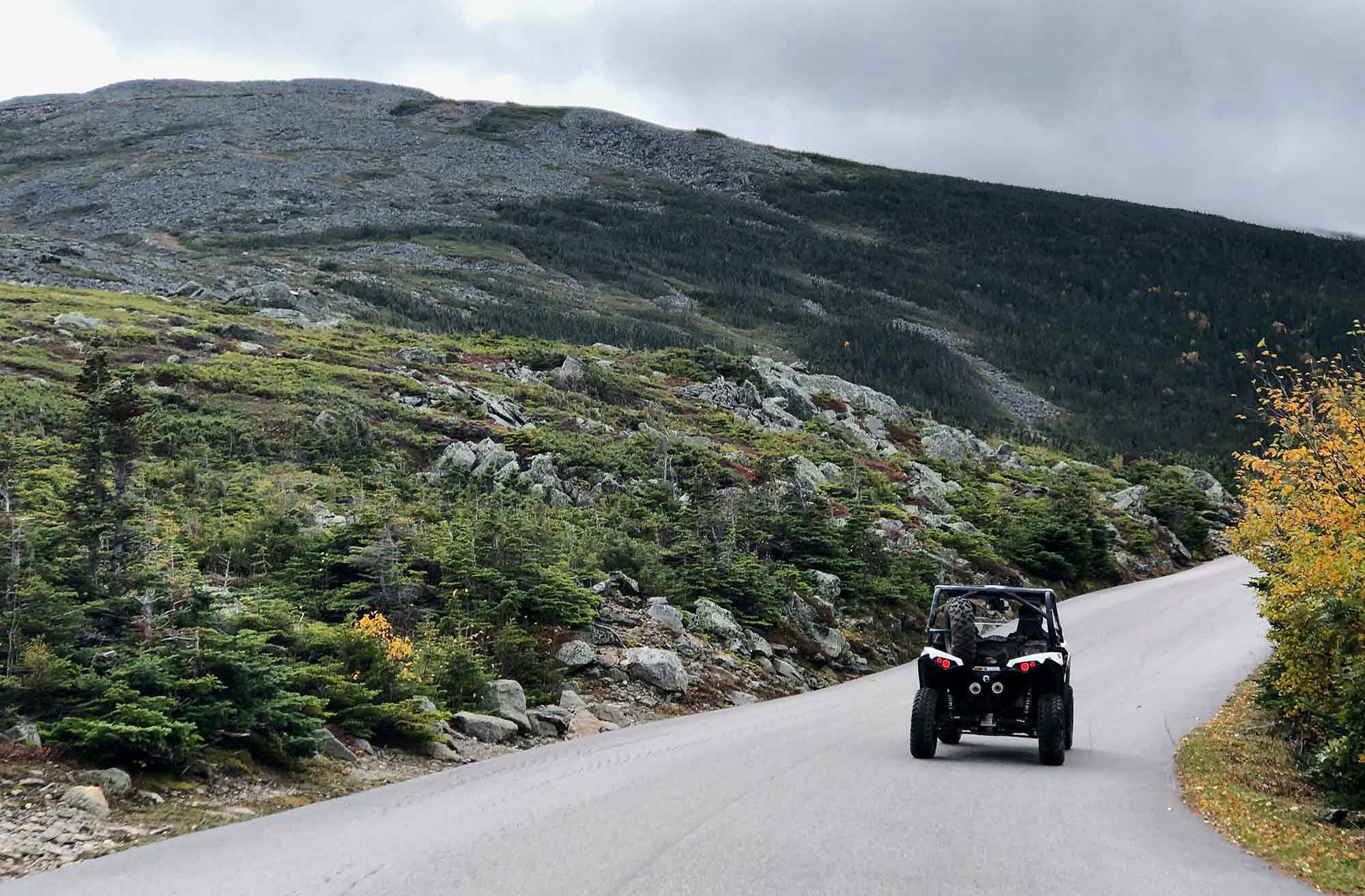 It truly looks otherworldly above the tree line. (Ross Ballot/)

The trek down, naturally, is much quicker than the drive up. Gravity is much kinder to CVT belts and 30-inch tires when you’re doing what it wants. We pulled off to stare at the beauty of New Hampshire a few more times, then blasted the rest of the way to the parking lot. We arrived back at the truck laughing and smiling, but only somewhat satisfied. It was an amazing morning, but one cut short. As exciting as it was, we really wish we had been able to experience the summit. Mount Washington is famous for amazing views and the wind at the weather station atop the peak. We had gotten the latter half of the experience and will have to return to fully enjoy the former. A fantastic reason to go back, just next time it will be a little earlier in the season.

Snow hampered some of our Mount Washington experience, but we’ll be back. (Ross Ballot/)