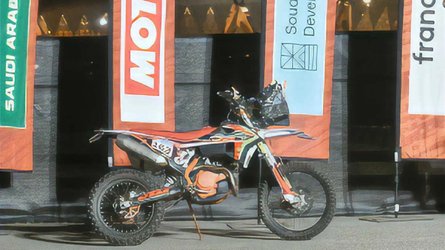 If you’re a motorcycle rider and you’ve been paying attention to the 2022 Dakar Rally, you know Giniel De Villiers. He’s the extremely experienced Toyota Gazoo Racing driver who appears to have heedlessly plowed into one rider and totally crushed the motorcycle of another on two separate early stages of the rally.

Thankfully, both riders seem to be mostly physically fine. Crashes and incidents happen during Dakar and other rallies, but the thing that competitors and observers really found appalling was the fact that De Villiers didn’t stop in either case. Time and again, when crashes happen in motorsports, it’s usually other competitors who are first on the scene to try to help their fellow rider or driver. De Villiers, for whatever reason, just kept going, and both riders involved were understandably upset.

On Stage 1B, Cesar Zumaran was trying to restart his stalled KTM when De Villiers hit him at a slow speed, knocking him over. If you’ve seen video of a Toyota car hitting a rider at the 2022 Dakar Rally, this is the incident you’ve seen. Clips have been making the rounds on the Internet ever since it happened, and with good reason. As a rider, you both don’t want to see it and you also can’t look away.

The next day, on Stage Two, De Villiers reportedly smashed the bike of rider number 163 after cresting a dune and landing directly on it. At the time, Moroccan rider Mohamedsaid Aoulad Ali said he couldn’t read the number plate on the car that crushed his bike, but telemetry later confirmed it was De Villiers. So far, video of this incident has not surfaced. Rally officials assessed only a five-minute penalty to De Villiers after the incident with Zumaran, but were reportedly investigating the second incident with Ali.

On January 5, 2022, Dakar Rally stewards announced that they were officially assessing a five-hour time penalty against De Villiers for this second incident. He will still be allowed to continue to compete in the 2022 Dakar, but this penalty effectively puts him out of the running for any sort of good placement at the close of competition on January 14.

The official decision reads, “The competitor was summoned to give him the opportunity of presenting his defence. The representative, Mr. De Villiers, explained: We have not heard any alarm signal from Sentinel [the car-to-car driver safety communication system used in this event]. We do not doubt that we have received a signal. The problem is that the button for the Sentinel is located on the floor of the co-driver’s side. During the Selective Section, the co-driver’s feet jump back and forth and can easily, accidentally press the button.”

“When we came over the dune, we saw the motorcyclist and I avoided him so as not to hurt him,” De Villiers’ statement continues. “At the bottom of the dune, we turned around to make sure that the rider was not injured. We didn’t feel hitting the bike when we landed. Then we continued the Selective Section. We are very embarrassed that something like this happens. We apologise very much for this incident. We are also willing to compensate the cost to rebuild the bike.”

The Stewards’ statement goes on, “Fortunately, the rider was not any more near his Motorbike and he suffered no injuries. However, the Motorbike is destroyed.”

“The Stewards consider the behaviour of the crew as an infringement of the regulation which must have consequences. Since Mr. De Villiers has voluntarily contacted the rider, apologised, and will pay for the damage caused, the stewards consider a time penalty to be necessary but also appropriate,” it concludes.