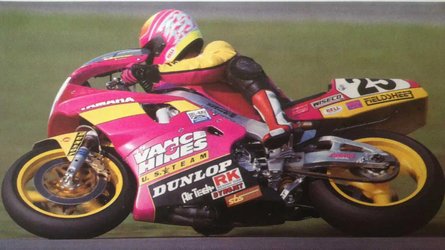 On January 12, 2022, 1990 AMA 600 Supersport Champion and Daytona 200 winner David Sadowski died at his home in Austell, Georgia. An official cause of death has not been made public, although a heart attack is suspected. He was 58 years old.

A man of many talents and interests, Sadowski (who also went simply by “Ski”) started racing motorbikes in the 1980s after transitioning away from hockey. Starting out on the streets of North Hampton, New Hampshire, it wasn’t long before someone suggested he should take his talents to the track. Luckily for AMA motorcycle racing fans, he did just that.

Through racing 250s, 600s, and 750s, Sadowski continued to hone his skills on track. After joining the Vance & Hines race team, he achieved what would be career peaks with his 1990 Daytona 200 win and AMA 600 Supersport Championship title.

Once his racing career on track wound down, Sadowski went on to become a TV commentator for AMA road racing broadcasts on Speedvision. The motorsports bug clearly never left him, as he also started a performance motorcycle riding academy in China, in addition to performing some development rider and superbike racing team crew chief duties over the years. Like many who fall in love with the sport, his lifelong dedication to motorbikes and going fast was absolutely clear.

Sadowski is survived by his girlfriend, Janet Godfrey, as well as sons Matthew and David Junior. Further information regarding planned memorials is not available at this time, but we’ll be sure to keep you updated as and when we learn more.

RideApart sends its deepest condolences to Ski’s family, friends, and fans who appreciated his passion and talent on track, as well as his willingness to share his knowledge and skills with the motorcycling world.

Head for the Lions Rd tomorrow!