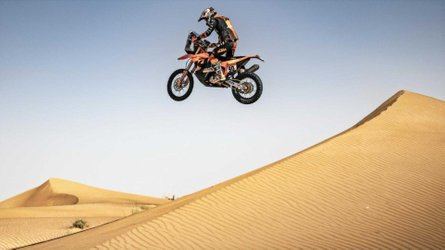 Things just went from bad to worse for former MotoGP racer Danilo Petrucci’s 2022 Dakar efforts. In mid-December, 2021, Petrux suffered a bone rupture in training for the event. At the time, he said that while he wasn’t able to go jogging, he was able to do plenty of other fitness training at home with no issues. He also said that he had every intention of pushing forward with his 2022 Dakar bid.

Unfortunately, as has become all too familiar a refrain in the past two years, COVID-19 appears to have had other plans. All participants in the 2022 Dakar are operating under strict COVID-19 protocols within the nation of Saudi Arabia, and must meet appropriate criteria and remain within a dedicated Dakar 2022 bubble before, during, and after the event until they depart for home.

Part of those criteria of course involve testing, and Danilo Petrucci just had a positive PCR test result on December 30, 2021. He’s currently in isolation as a result, and will have the chance to take another PCR test later in the day to check whether that first result was a false positive. If Petrux tests positive on this second test, he will unfortunately be unable to compete in the 2022 Dakar Rally. So far, he is asymptomatic—but as we’ve heard from public health authorities time and again, that of course doesn’t mean that someone can’t spread the virus.

Unfortunately, Petrucci is neither the only racer nor the only rider to be hindered by a positive test result in the run up to 2022. Yamaha rider Sara Garcia also received a positive PCR test result on December 27, 2021—and was quarantining in a hotel in Jeddah, Saudi Arabia prior to officially entering the 2022 Dakar bivouac to join the event. Due to the high number of positive test results, officials decided to retest those with positive results later to ensure accuracy.

Current COVID protocols mean that participants must test negative to board planes to Saudi Arabia in the first place, and then test negative again before they can join 2022 Dakar Rally bivouac and event bubble. Here’s wishing for good health and negative test results for all ahead of the rally.