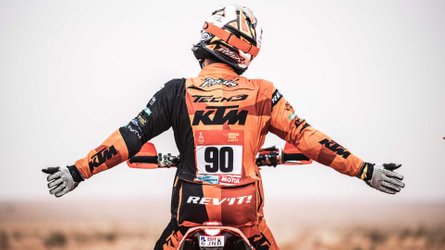 No one knew how things would shake out when the 2022 Dakar Rally started, least of all Danilo Petrucci. MotoGP racers don’t typically start doing rally raids once they’re out of the MotoGP paddock, but Petrucci decided that was the path he wanted to take. Thus, Dakar fans and also MotoGP fans watched with interest to see what would happen.

So far, Petrux’s run has been filled with ups and downs—most recently setting a time that got him to the third step on the podium in Stage Four. That’s an impressive feat, especially since that also meant the KTM racer was faster than all of his much more seasoned Dakar teammates in the KTM paddock. With more than half the 2022 rally to go, that only left one question: What would Petrux do next?

It turns out we didn’t have long to wait. On Stage Five, provisional timing had Petrux come in just four minutes off the pace of first place. That’s right, Petrucci’s time had him place second in the bike class on Stage Five, only trailing KTM’s Toby Price. However, there’s a reason that all the first times posted are only declared provisional until officials can go over what happened and assess any penalties required for infractions that competitors may have incurred.

Once all was said and dune, Dakar Rally officials declared Danilo Petrucci the winner of Stage Five! The reason: Toby Price received a six-minute penalty for speeding. The official results for Stage 5 of Dakar 2022 are now Danilo Petrucci in first, Ross Branch in second, and Jose Ignacio Cornejo in third. For his part, Petrux posted a screencap of the Dakar Rally’s official tweet announcing his stage win along with the completely relatable caption, “I’m crying like a baby I cannot write.”

That makes Petrux the first-ever MotoGP rider to win a Dakar Rally stage in the event’s long and storied history. A quick look at all the comments on that Instagram post sees road racers from the top levels of motorcycle-based motorsport all popping in to congratulate and cheer him on. We know we’ve become PetruxApart in the past week or so, but this is honestly pretty thrilling stuff to watch.