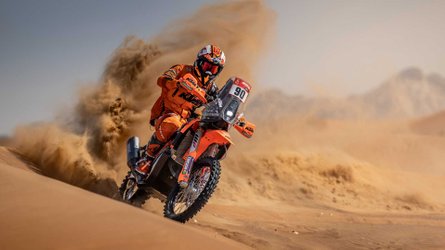 Are you following the 2022 Dakar Rally? The event is scheduled to run from January 1 through 14, 2022—and it’s January 3 as we’re writing this, which means the third day of events is now underway. Luckily for KTM factory rider and former MotoGP racer Danilo Petrucci, his second COVID PCR test came back negative, so he was able to participate. Yamaha’s Sara Garcia was also among those with a false positive, and she was cleared to participate as well.

Things were looking very much “so far, so good” for both Petrux and Garcia after Dakar Day One. Petrucci even managed to finish 13th in general classification after that first day, which is not too shabby considering that it’s his first-ever Dakar. If you recall, he also had an ankle injury in December, 2021 that prevented him riding until the first day of Dakar, which makes that placement look even better.

Unfortunately, Petrux’s luck took a turn for the worse on Day Two. At Kilometer 115, at just four minutes off the pace of leader Rui Gonçalves, Petrucci’s bike stalled and he was unable to restart it. After attempts to diagnose and repair the problem, Petrux found that it simply wasn’t possible, according to Motociclismo.IT. He ended up radioing back to organizers to be rescued by air, unable to complete the stage.

In previous years, this would spell the end of Petrucci’s Dakar run for 2022—which is a shame, since just completing a Dakar is pretty amazing in its own right, especially if you’re a rookie. The rules for Dakar 2022, however, would allow Petrux to start Stage 3 with a big time penalty if he chooses to continue, however.

If he and the KTM team simply want to get more experience under his belt and power through to hopefully complete the rally, this could be a good choice. It’s not clear at this point whether he and the team will choose to retire, or continue with the penalty. Nonetheless, it’s an interesting option and choice to have.