Damon Motorcycles only released a silhouetted image of its HyperFighter Colossus when it announced the bike in December, 2021. Despite veiling the bike in darkness until the official reveal at the Consumer Electronics Show (CES), the brand already opened registration for the ultra-limited model. With CES in full swing, Damon finally pulls the covers off the much-awaited Colossus, but the HyperFighter family has even more in-store.

Consisting of the Colussus, Unlimited 20, and Unlimited 15 variants, the lineup benefits from many of the same innovations that put the HyperSport on the map. The brand’s Co-Pilot 360-degree advanced warning system still utilizes radar, cameras, and sensors to alert the rider to potential hazards.

While most naked bikes favor taller handlebars and lower footpegs to increase rider comfort, Damon’s Shift system allows users to adjust the ergonomics to both relaxed street riding and aggressive charges on the track. Of course, customers can also personalize the HyperFighter with customizable bodywork and graphics. 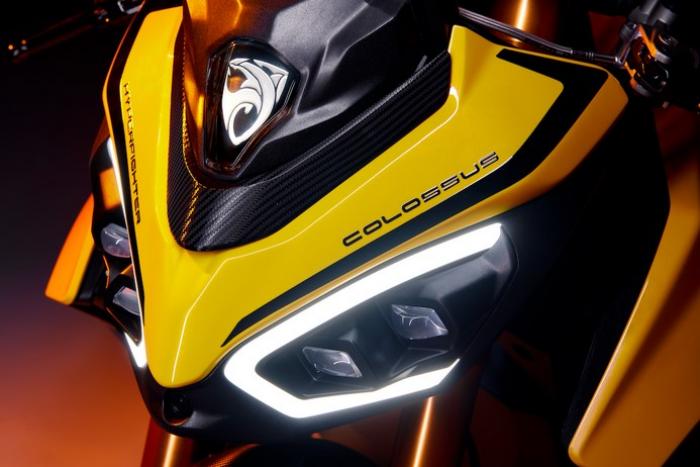 Similar to its HyperSport Premier relative, the flagship HyperFighter Colossus touts Brembo brakes, Ohlins suspension, and a sporty single-sided swingarm. Damon throws in premium wheels and a special body kit to sweeten the deal. While the HyperFighter will duke it out on the streets, the firm’s monocoque-constructed HyperDrive powertrain retains 200 horsepower and over 147.5 lb-ft of torque.

Paired with a 20 kWh battery, the potent package powers the Colossus to a 170-mph top speed, but also nets a 146-mile range in the process. The naked bike is quick off the line too, accelerating from zero to 60 mph in less than three seconds and zero to 100 mph in less than five seconds. As expected, all that tech and performance comes at a price, and the HyperFighter Colossus charges $35,000 for its services.

However, the HyperFighter Unlimited 20 trim is a valid alternative if you’re willing to forego the sexy single-sided swingarm, premium wheelset, Ohlins suspenders, Brembo binders, and limited-edition bodywork. At $25,000, the Unlimited 20 still isn’t cheap, but it returns the same power ratings, top-speed, acceleration, and range as its premium sibling.

Those looking for a more economical option will gravitate to the Unlimited 15 model’s $19,000 price tag. With a 15 kWh battery at its core, the entry-point HyperFighter generates a respectable 150 horsepower, but torque remains at more than 147.5 lb-ft. Similarly, top speed reduces to 150 mph and range decreases to 120 miles, but Damon retains the HyperDrive’s acceleration figures.

Customers can reserve the HyperFighter in Unlimited guise with a fully-refundable $100 deposit or throw down $250 on the ultra-limited Colossus.