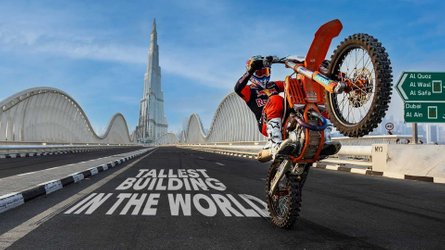 Cross-country rally rider Sam Sunderland previously spent six seasons with the Red Bull KTM Factory Racing Team. In that time, the British rider claimed victory at the 2017 event and followed up with two third-place finishes in 2019 and 2021. For 2022, however, Sunderland takes the top spot at the Gas Gas Factory Racing Rally Team.

Prior to traveling to Saudi Arabia for the legendary race, number 3 apparently had to wrap up his pre-season training in Dubai with an exercise of the utmost importance—a photoshoot. At the behest of two-time Dakar champ Toby Price, Sunderland throws a leg over his KTM 450 Rally for one last blast through the desert. Destination: the tallest building in the world, Dubai’s Burj Khalifa.

Luckily, Sunderland takes the long way ’round, charging through the landscape aboard his KTM 450 Rally. By the time the Brit gets to the Dubai exclave of Hatta, a KTM motocross model conveniently awaits him. The terrain coincidentally calls for the lighter dirt bike, with Sunderland plowing through rocky trails and sending it over sand dunes. By the time he reaches the city limits, shopping malls and golf courses become Sunderland’s new playground.

Like many Red Bull videos, the premise seems quite contrived, but the imagery it produces borders on surreal. At one point, Sunderland rides through an underwater walkway and wheelies alongside Dubai’s famous fountains. Red Bull has become synonymous with stunts of this nature and it’s thrilling to see the best riders in the world showcased in such dramatic fashion.

Of course, after countless detours, Sunderland arrives at the Burj Khalifa in the nick of time. However, he has one last stunt in store. With a helicopter circling the skyscraper, Sunderland stands at the Burj Khalifa’s highest point, surveying the city below. After a video filled with adrenaline, this final feat almost feels tame by comparison.

However, Sunderland now enjoys the same view of the 2022 Dakar field after eight stages. With eight stages in the bag, the Gas Gas rider resides at the top of the standings. This marks the sixth occasion that Sunderland has snagged the top overall spot in the 2022 competition. Similar to his exploits in Dubai, hopefully, Sunderland can arrive at the finish line on time.

Toni Bou Trains In Snow Ahead Of 2022 Trial World Championship