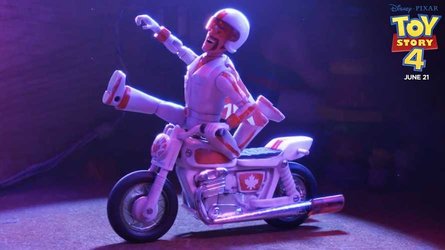 Back in September, 2020, we told you that Evel Knievel’s son, Kelly, was suing Disney, Pixar, and a host of related companies regarding Toy Story 4. The suit alleged that the character of Duke Caboom—a jumpsuit-wearing Canadian daredevil voiced by RA bestie Keanu Reeves—knowingly infringed upon intellectual property rights associated with Evel Knievel.

Kelly Knievel’s company, K & K Productions, says that it owns all IP rights associated with the legendary American stuntman and entertainer. What some viewed as homage, K & K Productions claimed was a massive ripoff. It sought over $375,000 in relief, from several types of damages. The suit was filed in Las Vegas, Nevada, which is where K & K Productions is based.

One year later, in late September, 2021, Nevada federal court judge James C. Mahan ruled that Disney did not purposely confuse consumers into mistaking Duke Caboom for Evel Knievel, nor that it implied endorsement by or association with the American stuntman. In the lawsuit, K & K Productions alleged that Caboom was too similar to Knievel, including the stunts, jumpsuit, action figure line, and basically the character’s entire existence.

To weigh the merits of this suit, Judge Mahan’s court relied on the Rogers test, which was established by the 1989 intellectual property suit, Rogers vs. Grimaldi. In that case, Ginger Rogers sued film producer Alberto Grimaldi and MGM over distribution of the Federico Fellini film, Ginger and Fred.

The film depicted two real-life Italian cabaret performers whose regular routine was based around the legendary on-screen presences of Ginger Rogers and Fred Astaire. The ruling in that case found that since the title was relevant, and also did not explicitly imply Rogers’ involvement or endorsement, it was “an exercise of artistic expression rather than commercial speech,” according to the Lexis-Nexis Law School Case Brief.

As for Duke Caboom vs. Evel Knievel, Disney sufficiently proved that Caboom’s contributions to the plot of Toy Story 4 were significant, according to Judge Mahan. Additionally, he said that Caboom and Knievel exhibit enough differences that they couldn’t easily be confused with one another. Caboom is Canadian, Knievel was American, their backstories aren’t the same, etc. Finally, the judge ruled that Caboom’s character constituted a sufficiently transformative work, and dismissed K & K’s legal claims in this matter.