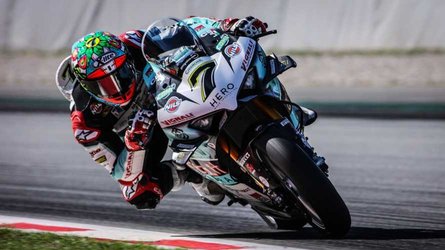 Still racing atop a Ducati, Baz is expected to serve as the replacement for Chaz Davies at the Jerez leg of the World Superbike (WSBK) Championship.

Following the injury, Davies subsequently announced that he “decided to call time” on his WSBK career. The racer has been in the sport for a long 27 years, and he has been racing ever since. Though, he also stated that he will still be actively training and riding motorcycles. Davies also stated that he wants to spend time away from the intensity of being a full-time WSBK rider. This move will allow him to spend more time with his family and pursue other goals.

Baz, meanwhile, had this to say: “First of all, I want to wish Chaz a quick recovery, it’s never nice when a rider has an injury, and I hope he gets back on the bike soon.”

“I thank Team Go Eleven for the opportunity given, as well as Ducati and my team in America, HSBK, and Ducati New York, for letting me come back to Europe earlier than expected to be able to participate in the next WorldSBK races. It was a last-minute deal, I still have to fix everything to take the flight, but I can’t wait to be in Jerez, a track I really like, and get on the Superbike version of the Ducati V4 R. I’ll do my best and give 100% as always,” Baz added.

Loris Baz hails from France, hence his statement about returning to Europe early. The Frenchman is no stranger to Ducatis as his statement reads. He uses a Ducati V4 R in MotoAmerica, and was able to bag eight podiums, and is placed fourth overall in the championship standings.

It also won’t be his first time in the WSBK arena, having raced with the Ten Kate Yamaha team, and was able to finish eighth overall, with four podiums in total.