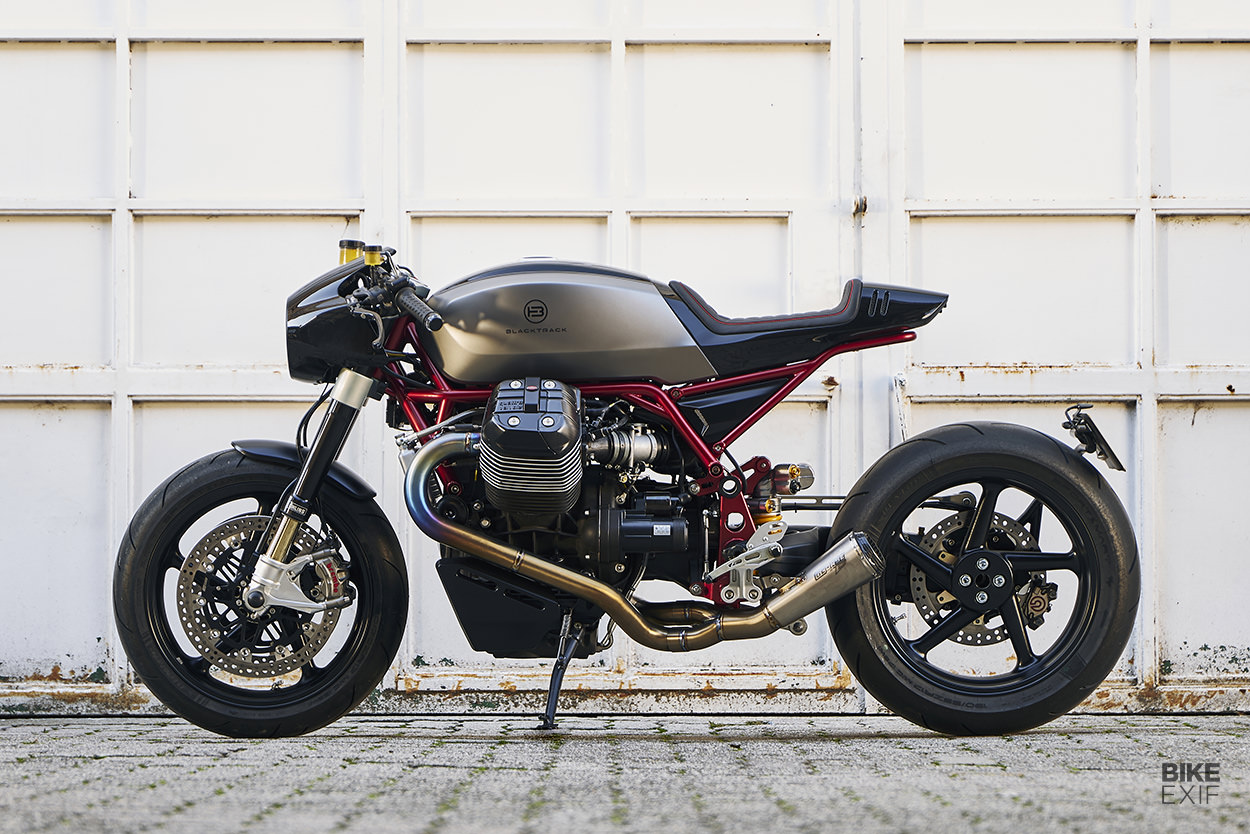 The last time we checked in with Blacktrack Motors, they’d just turned a bloated Harley cruiser into a svelte café racer. Their next project was a Porsche 964 Carrera 4 restomod—but they’re back onto two wheels now, and this time they’ve pulled out all the stops.

The Blacktrack Motors BT-05 Cento is a track-focussed café racer, built around a stonking 1,382 cc Moto Guzzi motor. It also uses a race-bred chassis, carbon fiber bodywork and a plethora of top shelf parts. And it looks absolutely spectacular, too. 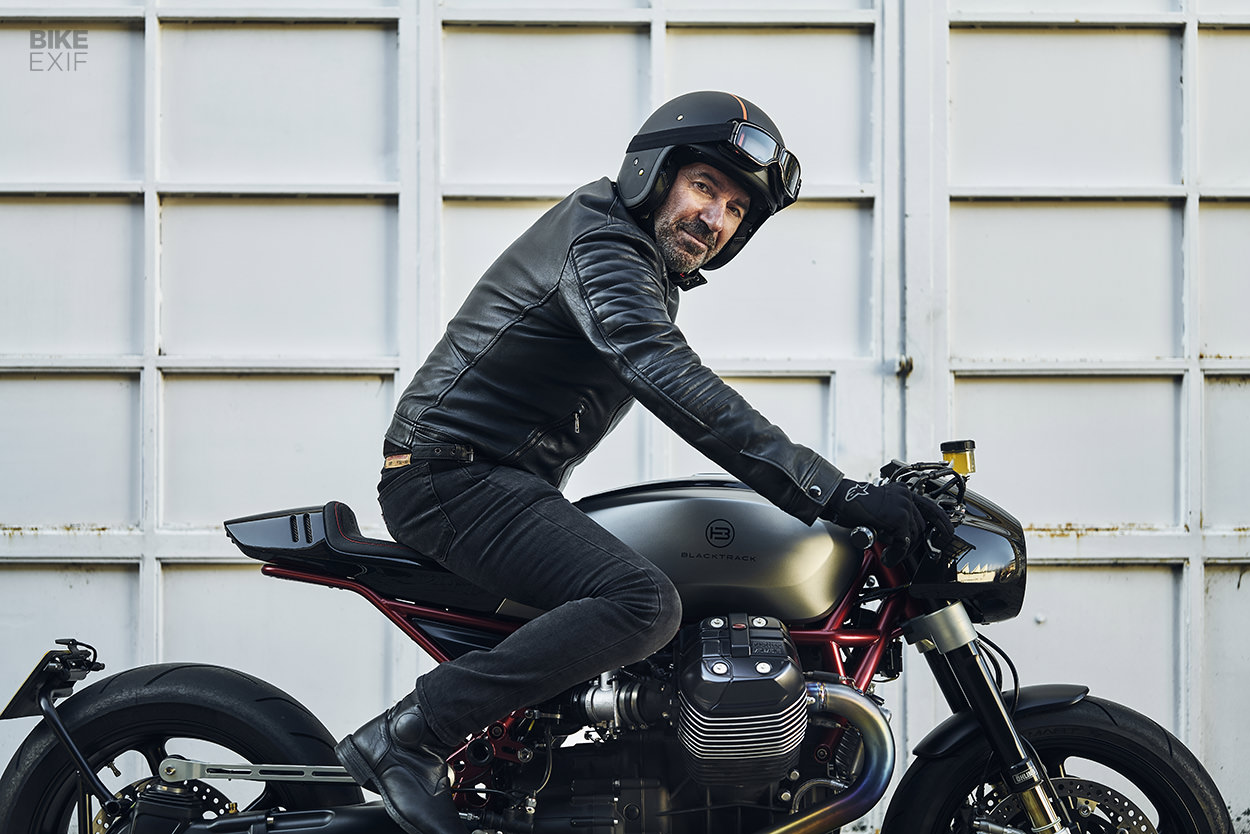 “Since the inception of Blacktrack Motors, building a café racer around a big Moto Guzzi V-twin engine was at the top of my list,” says Sacha Lakic, the company’s founder and lead designer. He’s designated this build ‘Cento,’ which is Italian for 100, as a homage to the storied marque’s 100 year anniversary.

“I love this brand, and this engine, for many reasons. They are soulful—the sound, the vibration, the typical side-to-side movement of a longitudinally mounted V-twin, the look of the motor from any angle, and even the shape of the shaft drive.” 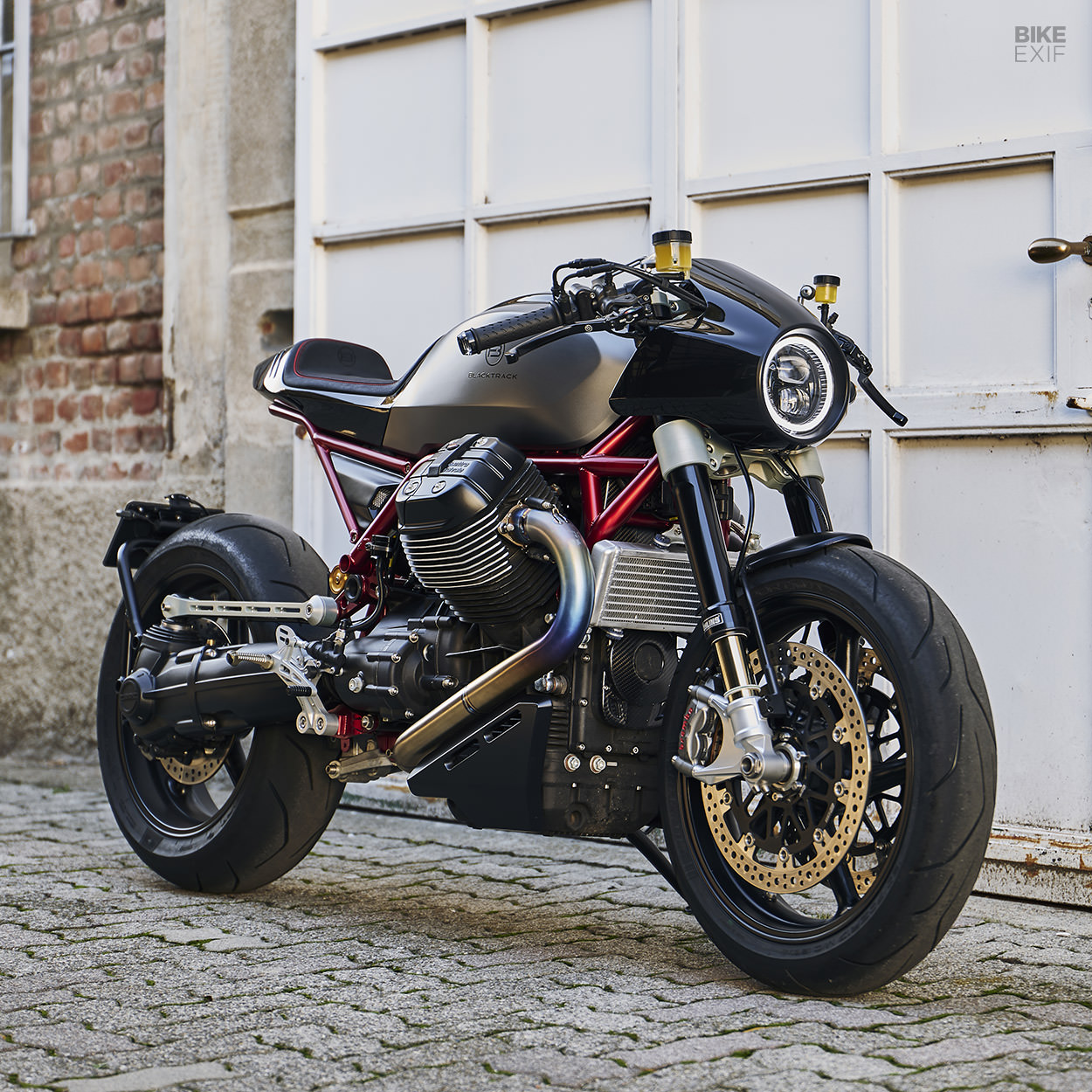 The exhaust system is equally racy. It’s a full two-into-one titanium system from Zard, designed specifically for this project. 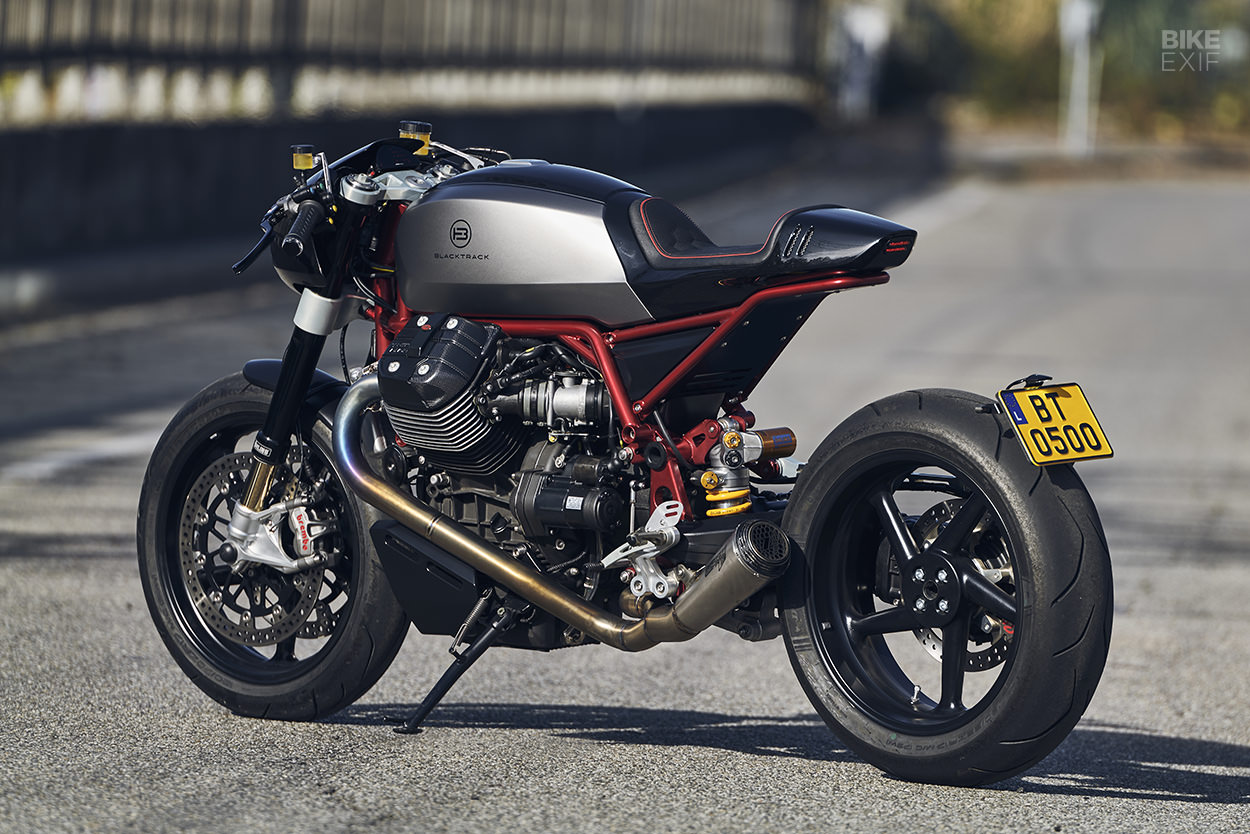 Blacktrack didn’t keep much else of the donor bike than it’s motor, because Sacha wanted this job to be more than just a remodel. “Stripping down a stock Moto Guzzi and simply creating a new style wasn’t enough,” he explains. “With the BT-05 we went one step further, by making it completely track-oriented.”

“All components were selected with these goals in mind: achieving as low a weight as possible, increasing power and torque figures, and making the BT-05 an absolute thrill to ride.” 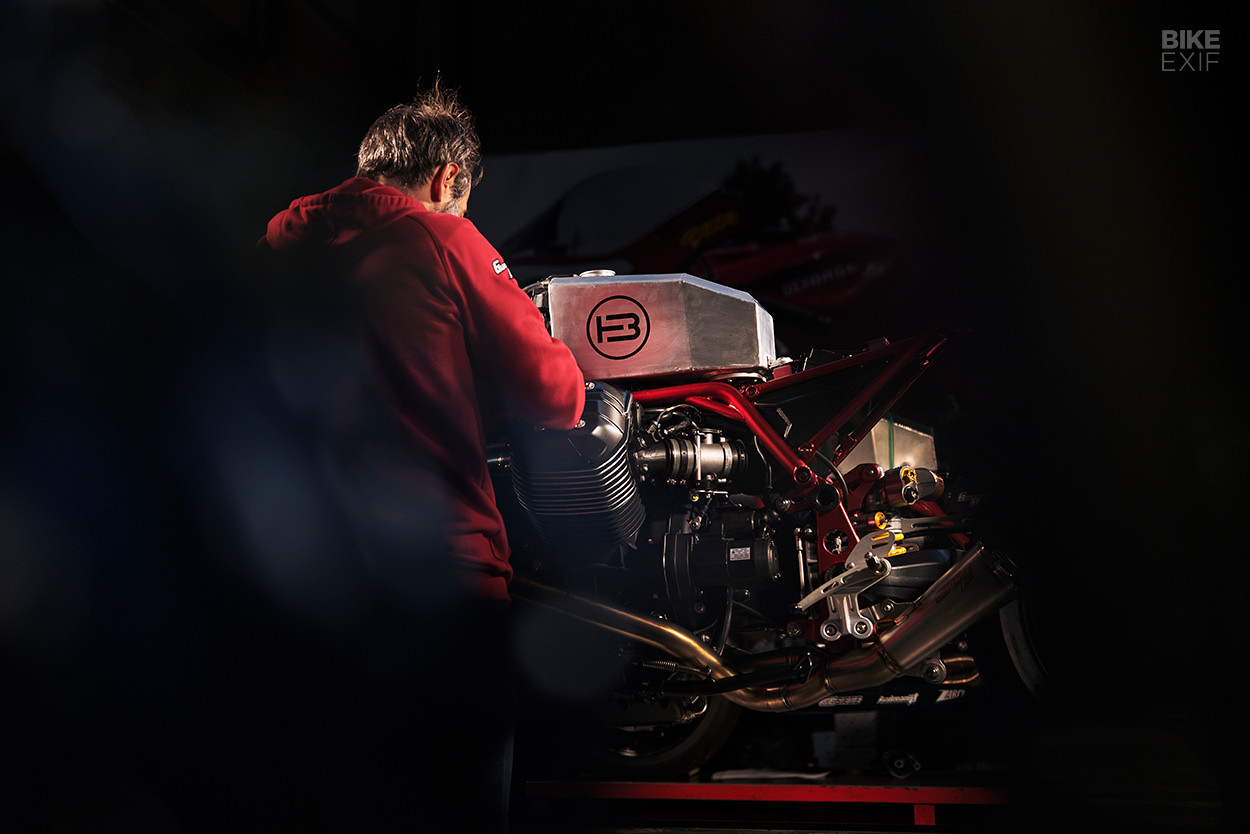 With that objective in mind, Blacktrack connected with the Italian Moto Guzzi specialists, Guareschi Moto, in Parma, Italy. Founded by Claudio Guareschi 50 years ago, it’s a family business that’s now run by his sons, Vittoriano and Gianfranco. The brothers share an immense amount of knowledge and race experience between them—Vittoriano managed Ducati’s MotoGP team for a while, and was their test rider before that.

Guareschi Moto have developed a tubular steel frame for Moto Guzzi twins, with track-specific geometry—so Blacktrack picked that for the BT-05. 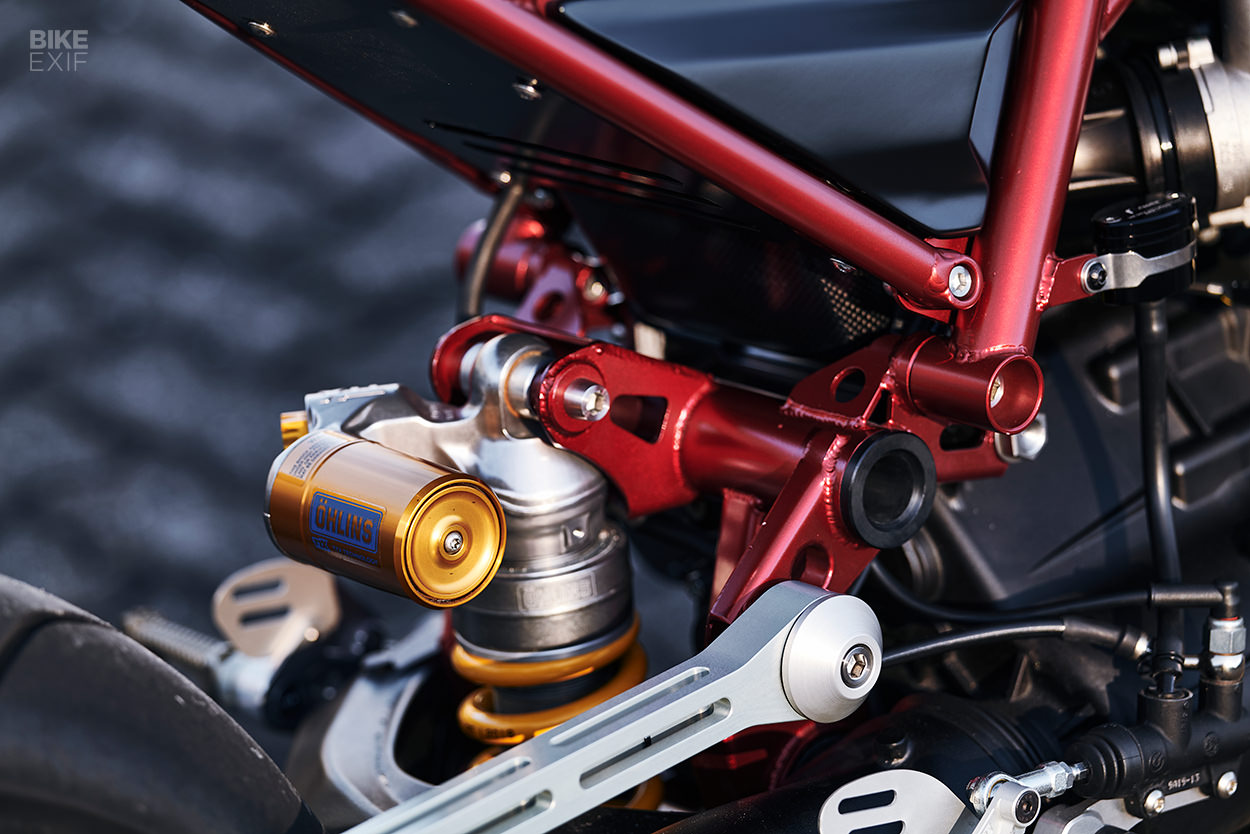 The main frame weighs just 10.7 kilos, and the subframe 1.7 kilos. Combined with a considered selection of components, it brings the overall dry weight to a very respectable 175 kg [386 lbs].

Those components include fully adjustable Öhlins suspension at both ends, magnesium wheels from Marvic with Michelin Power RS tires, and Brembo brakes. And items like the yokes, foot controls and shaft drive brace are all custom—designed by Blacktrack and CNC-machined by a trusted network of suppliers. 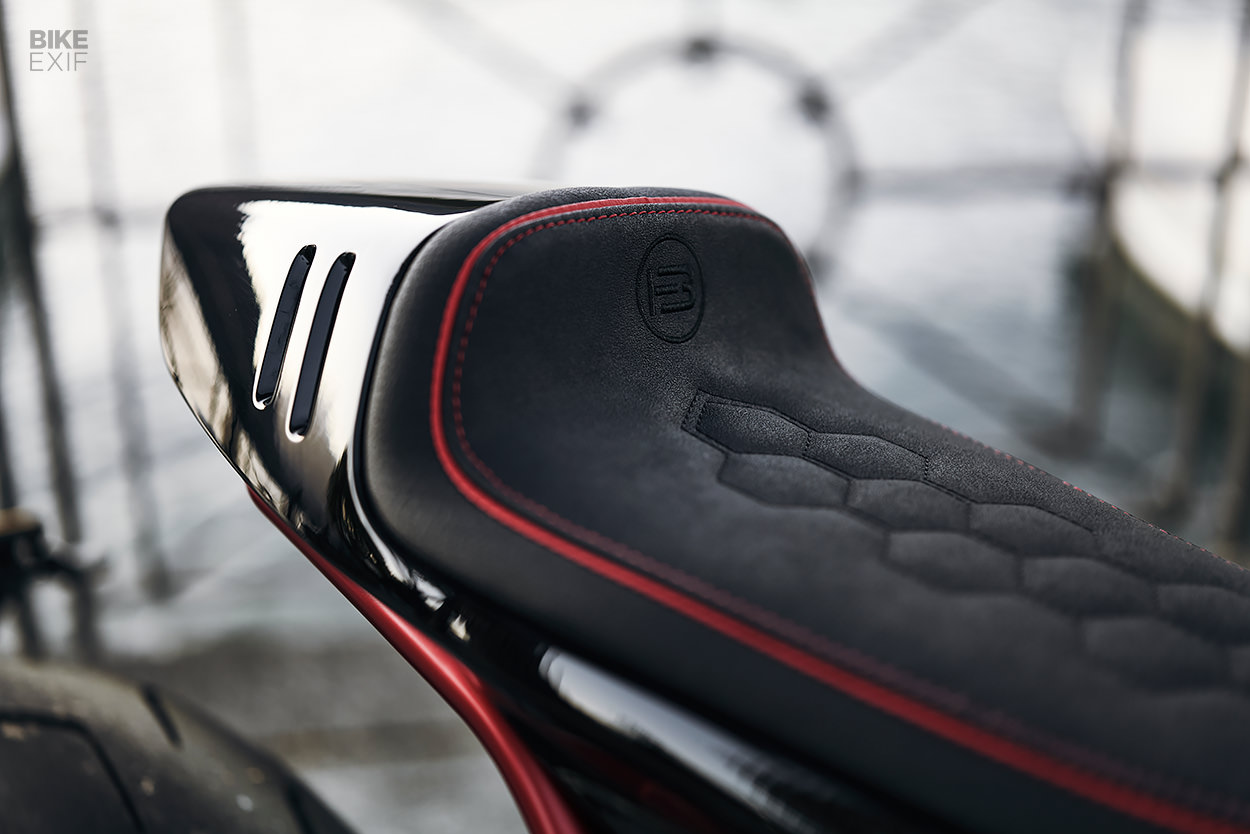 Sacha designed the BT-05’s compact bodywork, using an approach he calls “looking to the past to design the future.” His inspiration came from the legendary Moto Guzzi 850 Le Mans, but he explains that this is more of a contemporary re-interpretation than a straight replica. The bodywork is extremely minimalistic, with an aim to highlight the frame and motor.

Everything’s been built with carbon fiber, with a 3.2-gallon fuel cell hidden underneath a tank cover. There’s a café racer style hump at the back, but it’s deliberately sharper than most trad designs, to create “the look of a café racer that’s been put into overdrive.” 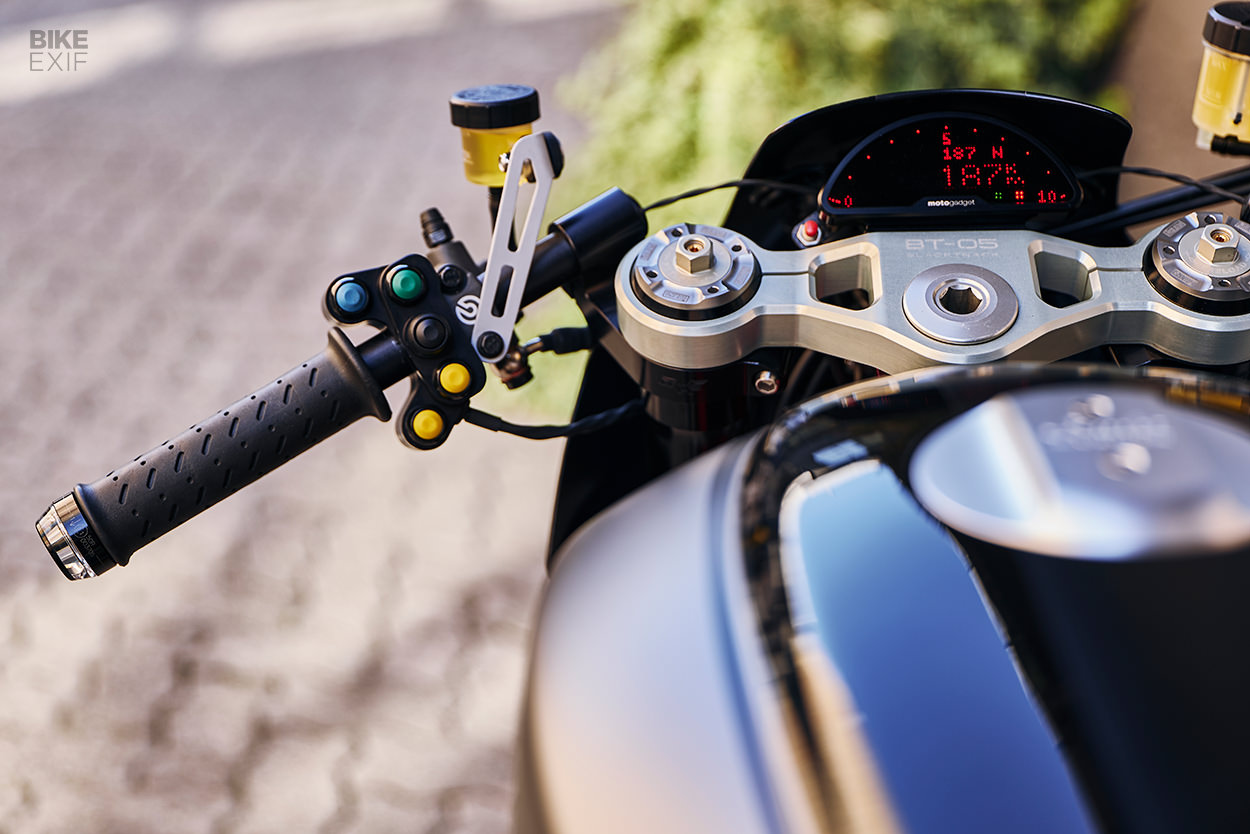 Up in the cockpit is a set of clip-ons, CNC Racing switches, a Motogadget Motoscope Pro speedo and a keyless ignition. There’s LED lighting at both ends and a low-slung license plate mount—but those are actually add-ons.

Blacktrack will be offering the BT-05 Cento as a limited run of 10 units, but since it’s designed as a track bike, it won’t be street legal out the box. If you want to run it on the street, you’ll have to fit an array of street-friendly parts that are supplied with the bike. 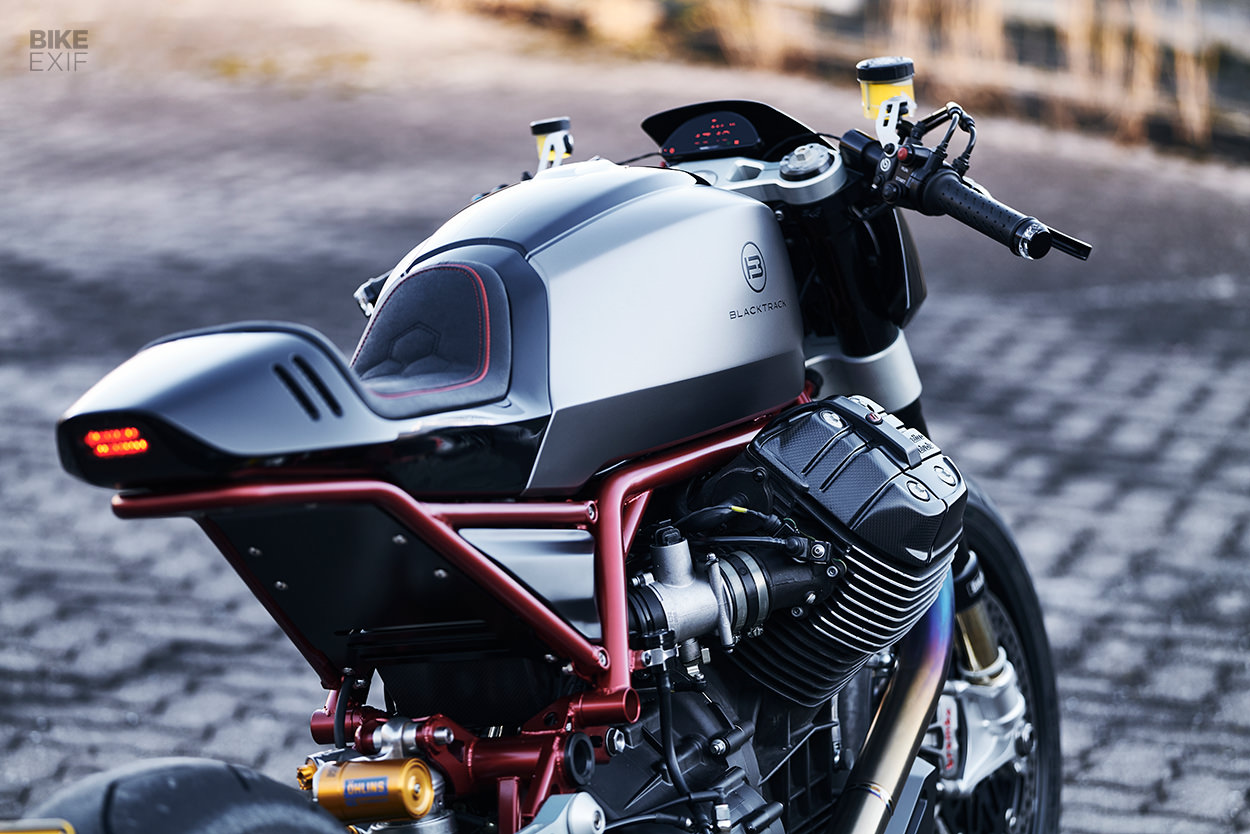 Each bike will be assembled in Italy, with a lead time of 12 months and a warranty that’s just as long. Customers can choose between more expensive carbon fiber, or slightly heavier (by six kilos) composite bodywork.

And to keep things exclusive, each BT-05 will have its own livery and trim colors. 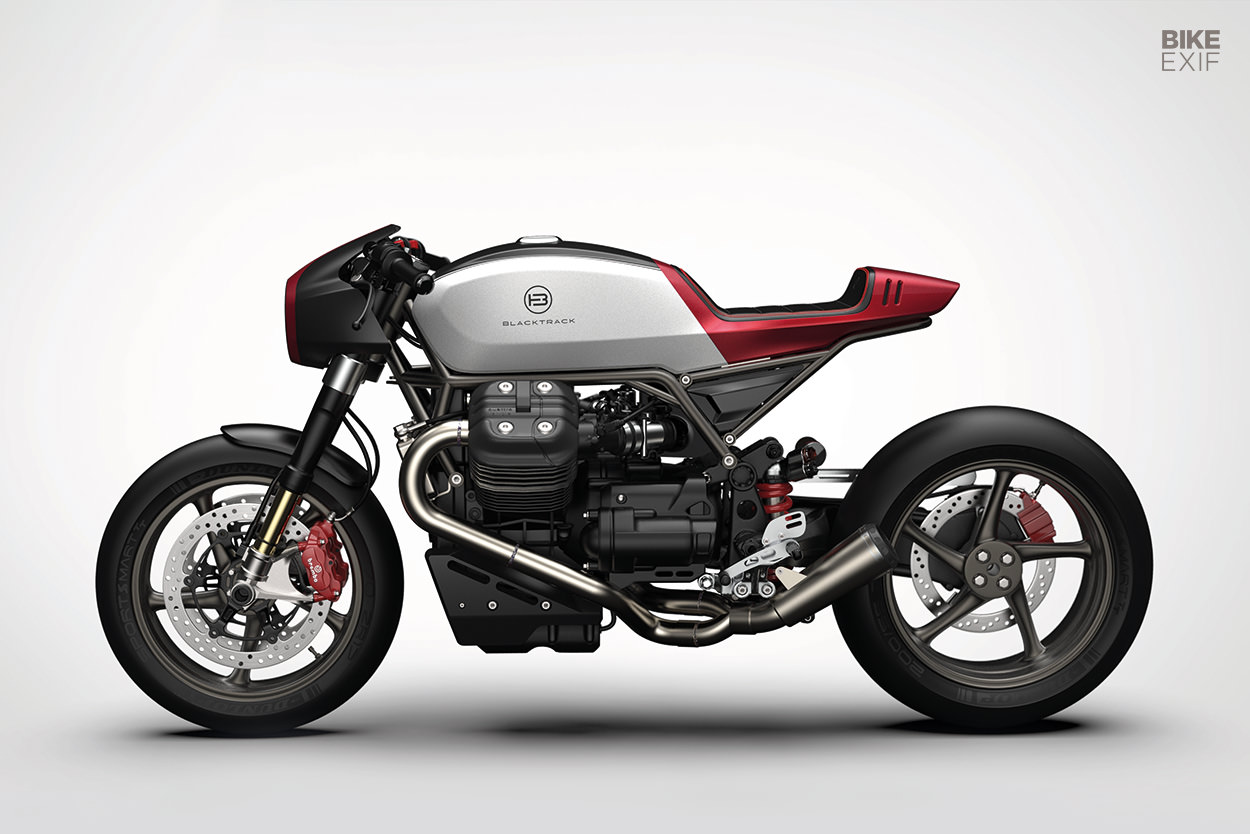 Blacktrack are calling the paint scheme on their prototype bike Charade Grey, named after the French motor racing circuit. But they’ve already mocked up various options, including Daytona Blue, Suzuka White [above] and Le Mans Red. If you were in the market, which would you pick? 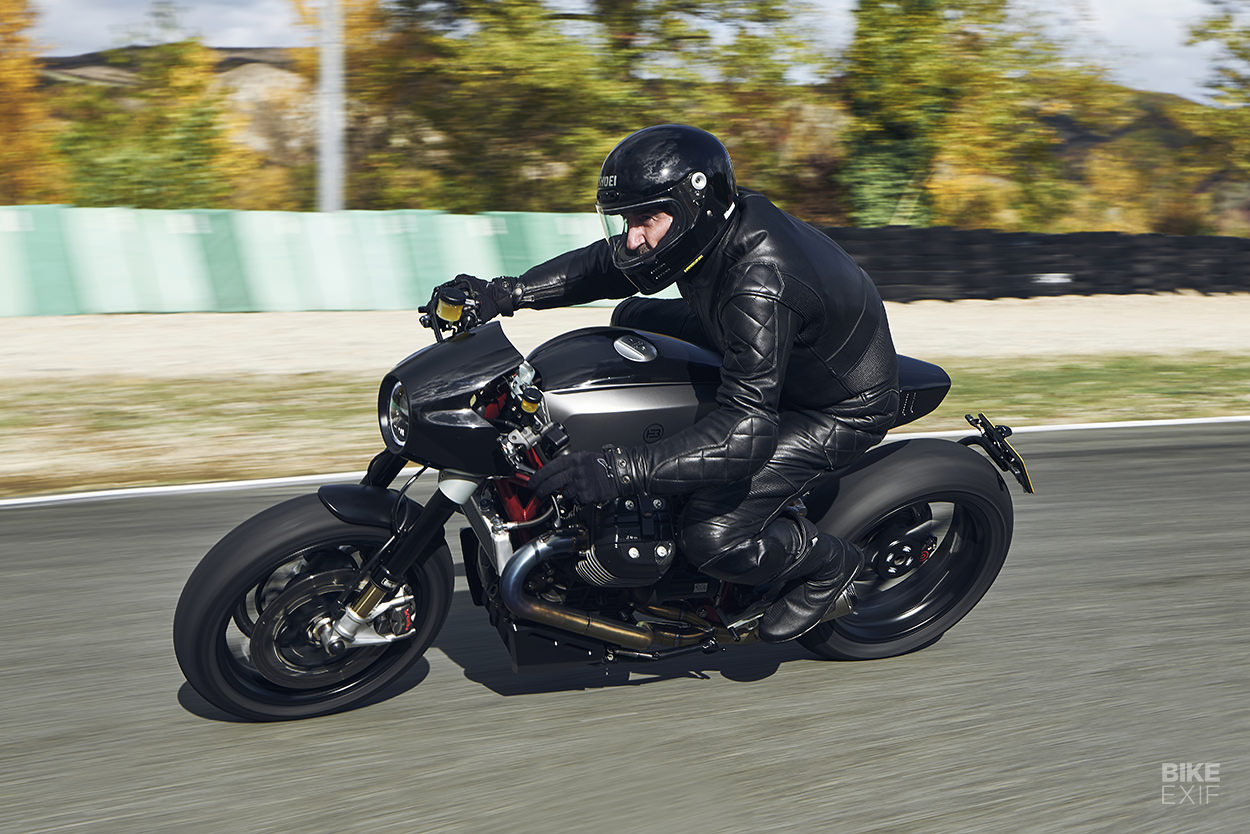