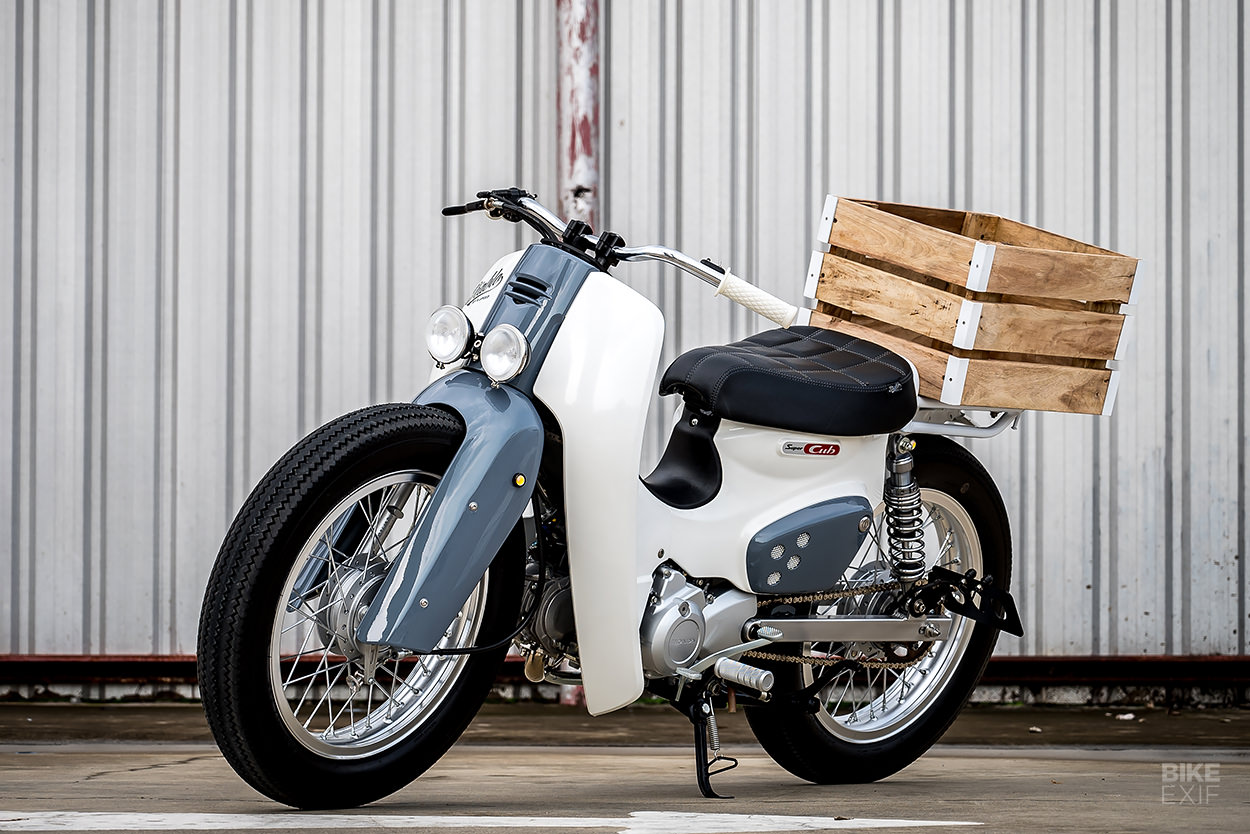 With over 100 million units produced to date, it’s impossible to overstate the Honda Super Cub’s popularity. And it’s been a massive hit over at K-Speed too. The Thai custom shop and parts manufacturer has racked up an impressive 70-plus custom Super Cub builds already, both for local and international customers.

Their latest custom Cub is also one of their cutest. It’s based on a brand new Super Cub 110i, which, if we’re honest, is good looking enough as is. But K-Speed has elevated this one with a bunch of small changes that make a big difference. 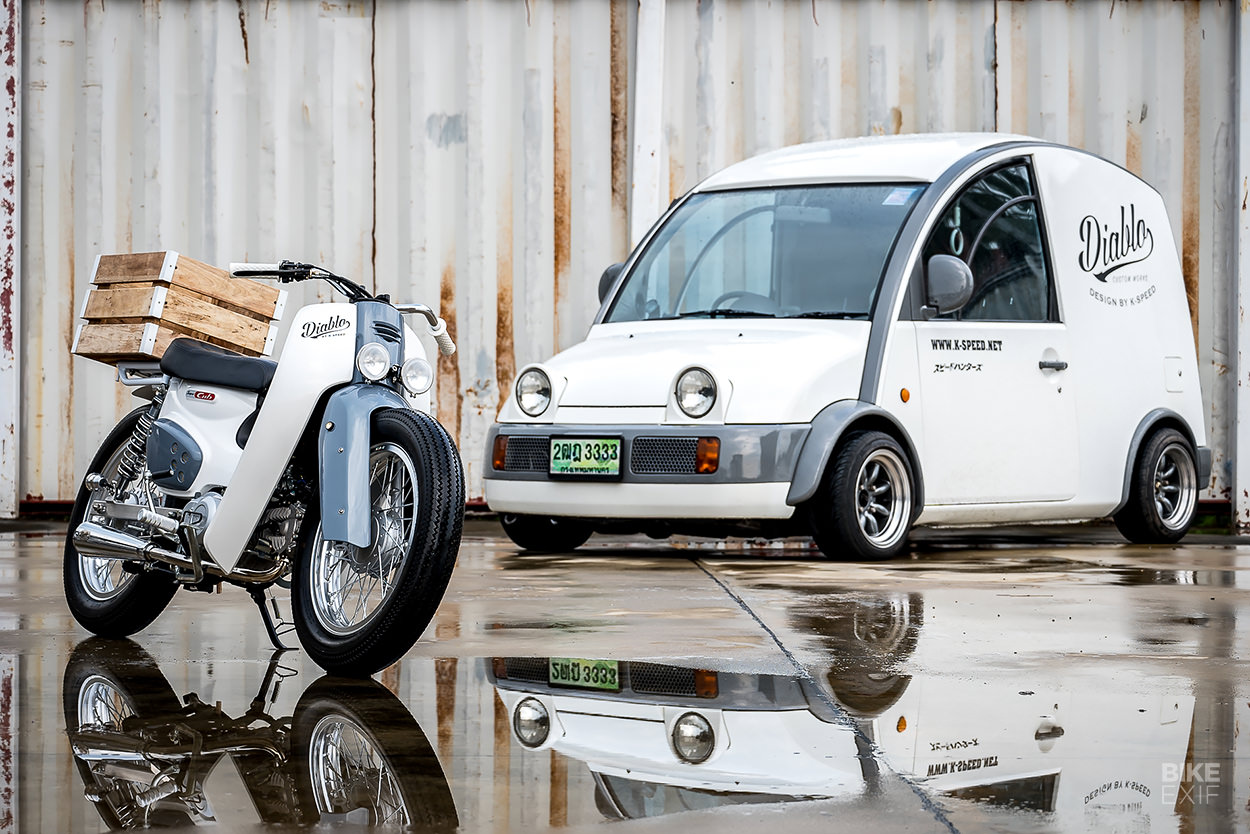 Dubbed the ‘Cargo Cub,’ the build takes its inspiration from shop founder Eak’s adorable Nissan S-Cargo. If you don’t know it, it’s a small delivery van that Nissan released in 1989—and yes, its name intentionally sounds like the French word for snail.

Parked up next to each other, the van and scooter make the perfect little cargo fleet. 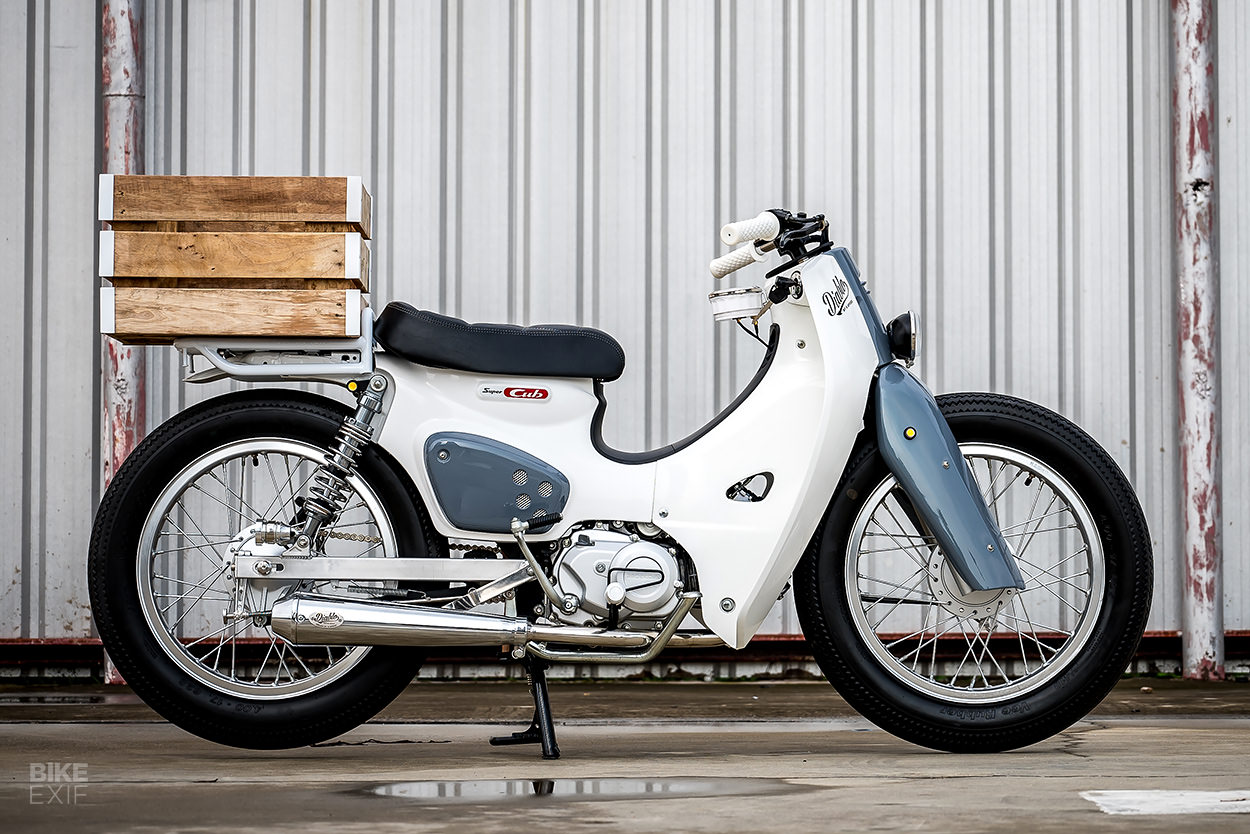 The changes start with the Honda’s wheels, where K-Speed re-laced the stock drum brake hubs to a new set of shouldered aluminum rims. They still measure 17” at both ends, but they’re now wrapped in chunky sawtooth treads from Vee Rubber.

The front suspension’s been lowered, and the front mudguard’s been replaced by a pair of fork covers, molded from ABS plastic. It’s had a radical effect on the Super Cub’s stance—even if the front tire clearance looks a little suspect. 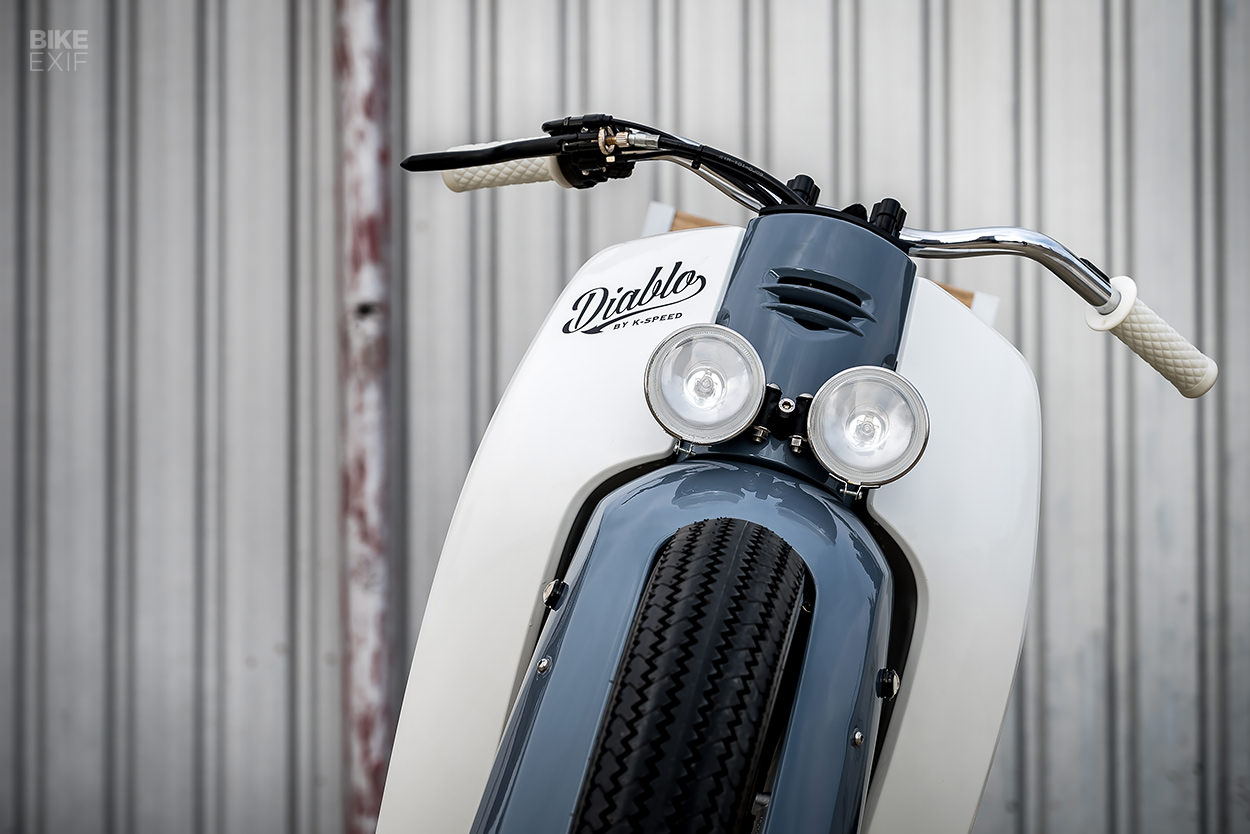 Higher up, K-Speed completely deconstructed the cluster that holds the scooter’s headlight and controls. Then they fabricated a neat twin headlight setup, to mimic the comically small lights on Eak’s Nissan. The arrangement matches the Cub’s OEM fairings and air vent so well, that it looks almost factory.

The cockpit’s been reworked with a traditional bar and riser setup, complete with a blank-off plate to keep the cabling tidy. Also present are new grips, micro switches, and an aftermarket speedo mounted aft of the bars. 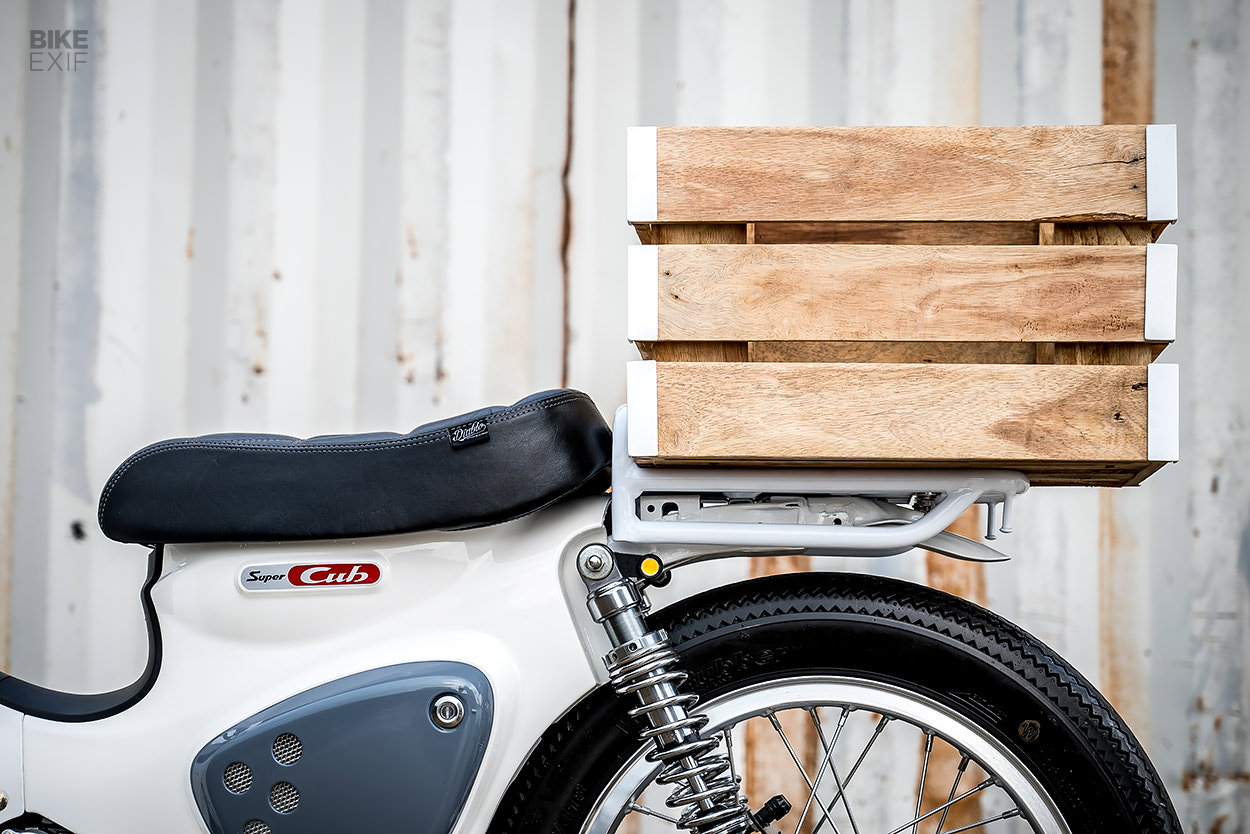 There’s more nipping and tucking at the back, where K-Speed trimmed off the bulk of the Honda’s rear fender. In its place are a steel rear fender and a custom-made luggage rack. The crew also ditched the bulky chain guard, and propped the rear up on a new set of shocks.

The box on the back looks like a repurposed crate, but it was actually pieced together from scratch. It’s a charming addition—and it bolts on and off in a jiffy, too. 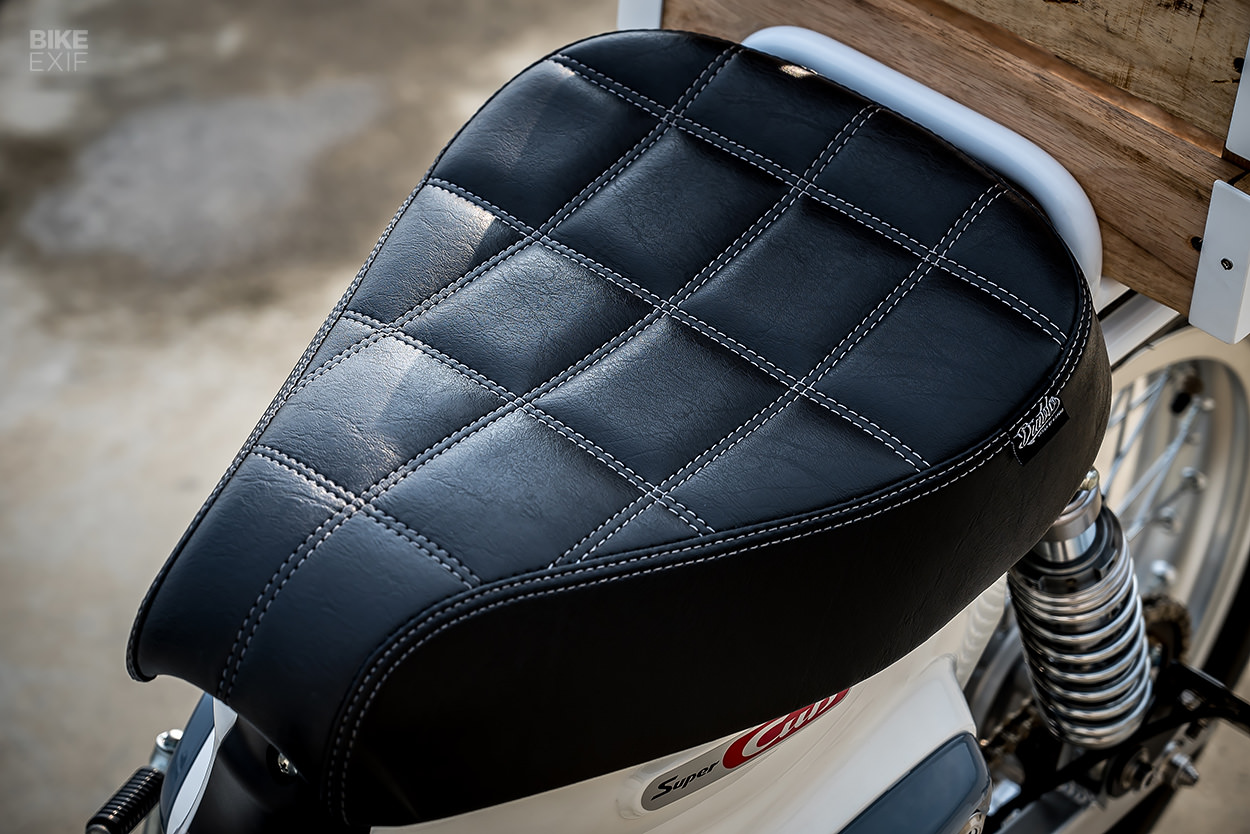 The rest of the build is sprinkled with parts from K-Speed’s own ‘Diablo’ range of bolt-on parts. The seat, exhaust and taillight were all plucked from the shelf, along with the discreet LED turn signals. (They’re mounted to the fork guards up front, and off the shock mounts at the back.)

K-Speed opted not to swap out the side covers for Diablo items, because they wanted to retain some of the Super Cub’s signature style. So they simple added a few mesh-lined holes as a final touch. 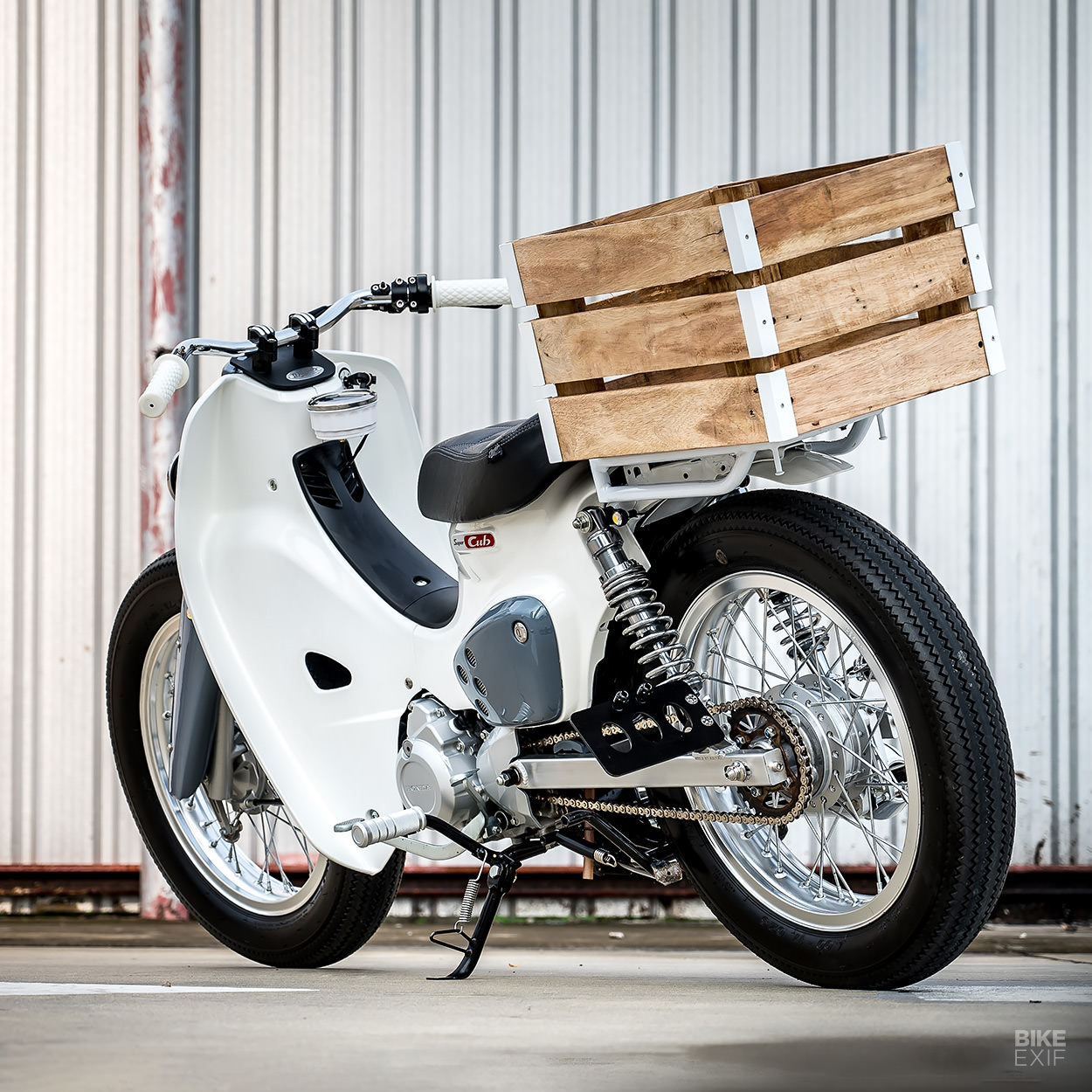 Wrapped in a matching grey and white livery, K-Speed’s Super Cub is about as close to a two-wheeled version of the Nissan S-Cargo as you can get. Sure, it might not have as much packing space—but we’d pick it over the van any day. 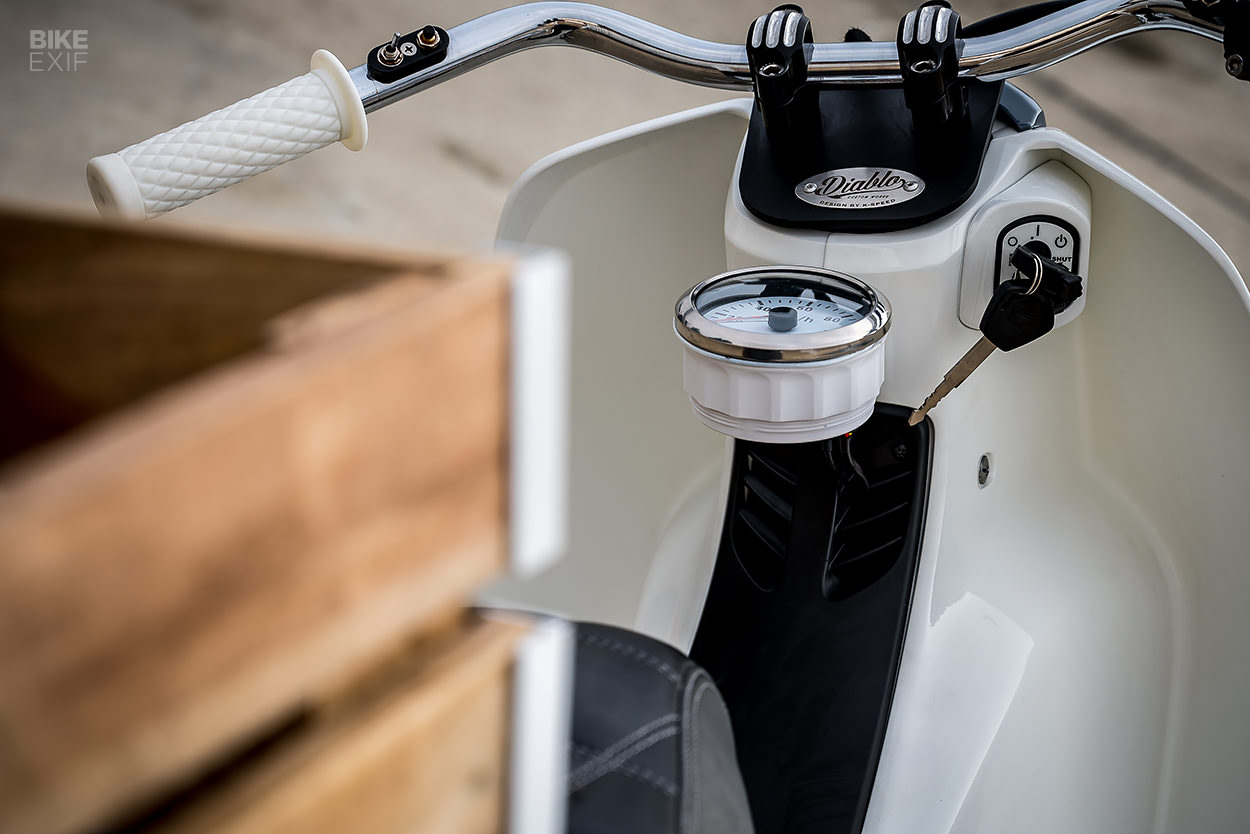 U.S. Motorcycle Sales Continued To Rise Across All Segments In 2021