Home » Articles » Can You Build A Bike Out Of Parts From Harbor Freight?
Articles

Can You Build A Bike Out Of Parts From Harbor Freight? 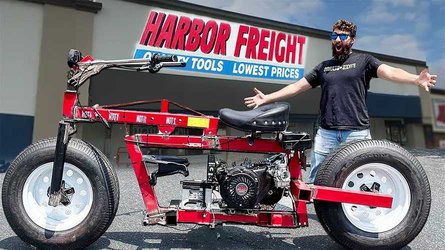 If you can dream it, you can build it—and who’s better at dreaming things than little kids? That’s what YouTube channel Bikes and Beards says inspired them to tackle this particular impossible build: A bike built entirely out of parts procured from their local Harbor Freight. How hard can it be, right?

What parts were involved? Among the pile of parts purchased, you’ll see a little rolling stool that turns into a handy saddle for this custom, two big wheels, a 420cc Predator engine, an engine hoist, and a big pair of tree loppers to use as handlebars. As it turns out, reconfiguring the engine hoist is what provides the basic structure of the entire build. Incidentally, key design features include a single-sided swingarm and a single-sided fork. No, really.

Now, of course, unless Sean is seriously downplaying his engineering skills in this video, both this and other B&B builds simply wouldn’t be possible without the mastermind known as Craig. While Sean takes up most of the on-camera duties, Craig is quietly beavering away in the background, coming up with CAD solutions, welding, and just generally making bonkers ideas like this come to life.

Did they make it work? Well, one sign of a good YouTube video editor is the premonition clip that opens up the video. Whether it’s a fantastic success or a colossal failure, you want to give viewers a tiny taste of what awaits them at the end of this particular 10-minute video journey. From that, viewer confidence that they managed to cobble something vaguely motorcycle-ish out of these parts—and so, we hit the Play button purposefully.

While you can certainly build anything your heart desires, given appropriate resources, the state you live in may not necessarily deem it road-legal. B&B is located in Pennsylvania, so how did the guys fare with trying to get it to pass inspection? You probably know the answer, but it’s still fun to watch.