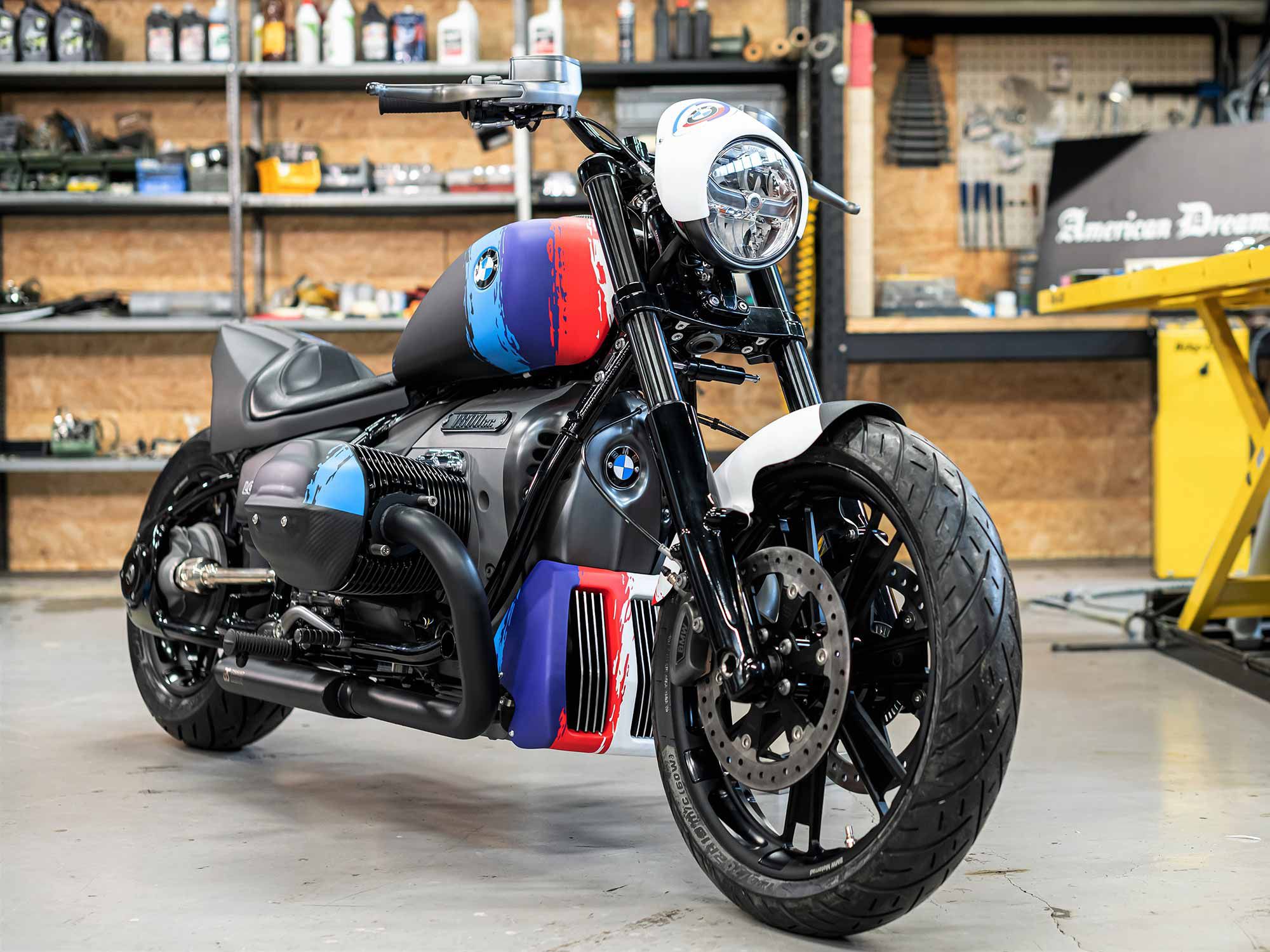 The BMW R 18 customs just keep coming, with the latest efforts being spotted at the annual Verona Motor Bike Expo in Italy, where BMW already has a history of introducing new bikes. The two newest creations are the outgrowth of collaborations between BMW Motorrad Italy and some of the better known local customizers on the Italian side of the planet. The first, the R 18 M, is a project developed by Italian magazine LowRide and then fleshed out by the American Dreams shop, while the second, the R 18 Aurora, was created by Garage 221 on behalf of BMW Motorrad Roma. 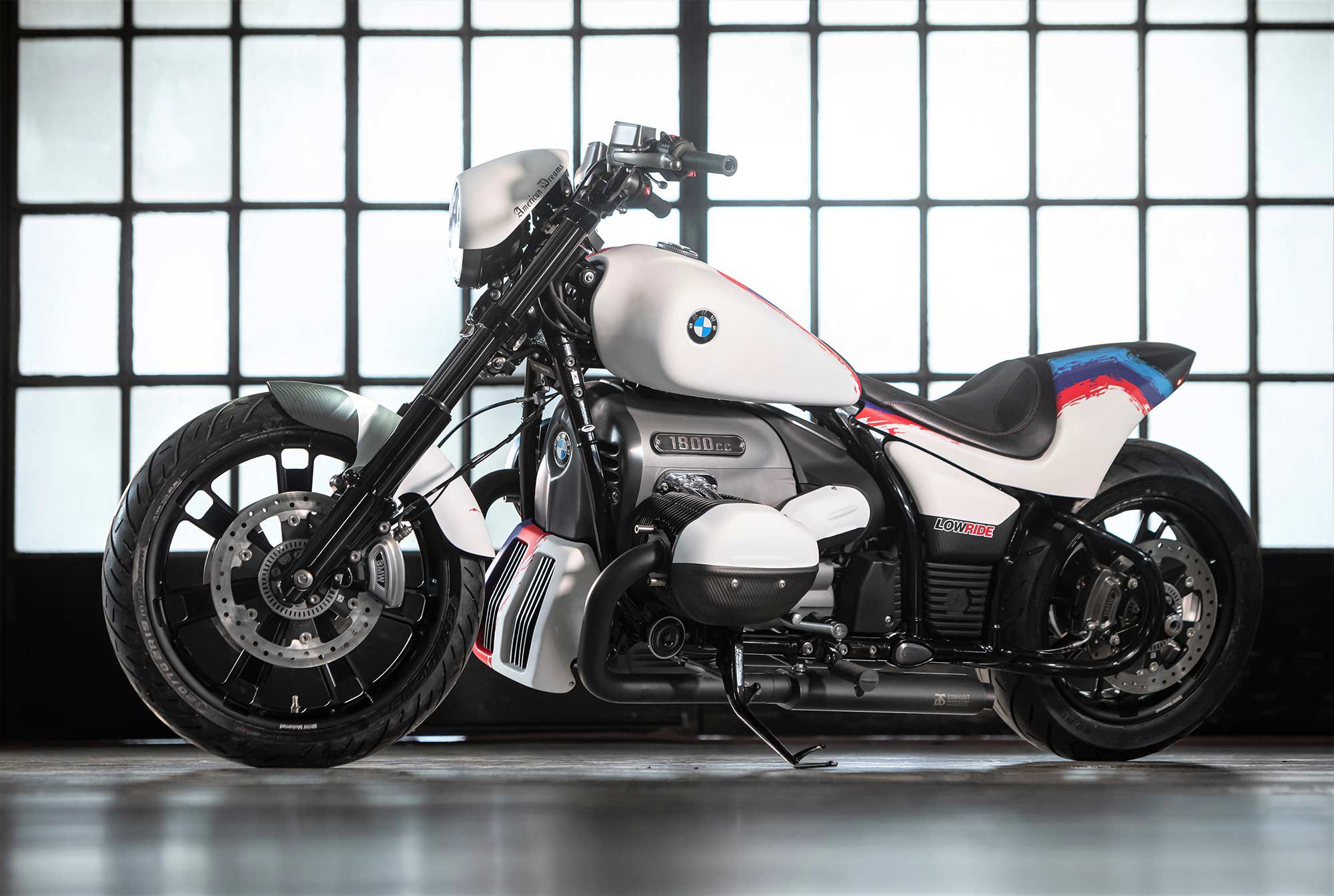 Lots of carbon fiber and handmade parts from tip to tail can be seen on the R 18 M. Assembly was by American Dreams. (BMW Motorrad/)

The “M” designation may be familiar to sport-loving BMW auto junkies, but the editorial staff of LowRide magazine wanted to impart that same vibe onto the R 18 as well, looking to give the BMW cruiser a sportier look without completely cannibalizing the R 18′s retro lines. In the R 18 M design, says Giuseppe Roncen, director of LowRide, “the work has focused on chassis, suspension setup, bodywork, and accessories, leaving mechanics and electronics unchanged.” 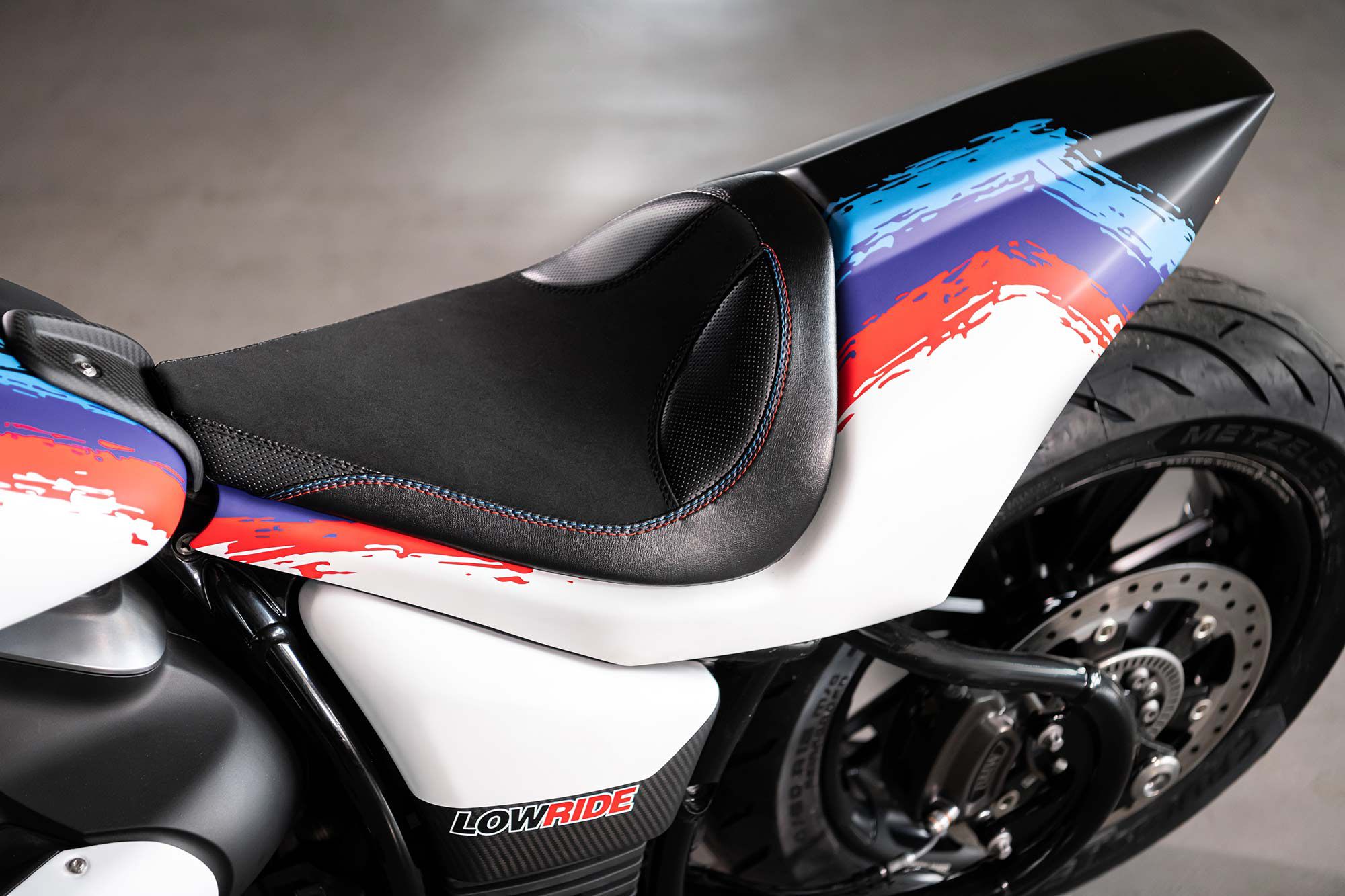 To achieve its goals, LowRide enlisted proven partners in the sector, tapping designer Oberdan Bezzi to handle the design sketches and the Elaboratorio firm for the modeling (it also created the custom’s tail and fiberglass minishield from scratch), while enlisting the American Dreams workshop to handle the assembly of all the elements.

Plenty of other firms chipped in as well, with the shorty exhaust pipe coming courtesy of ER Exhaust Revolution, the saddle design from L.R. Leather, while the paintwork was entrusted to Dox Art Factory. Rizoma provided mirrors, grips, and universal indicators for the accessories to cap things off. 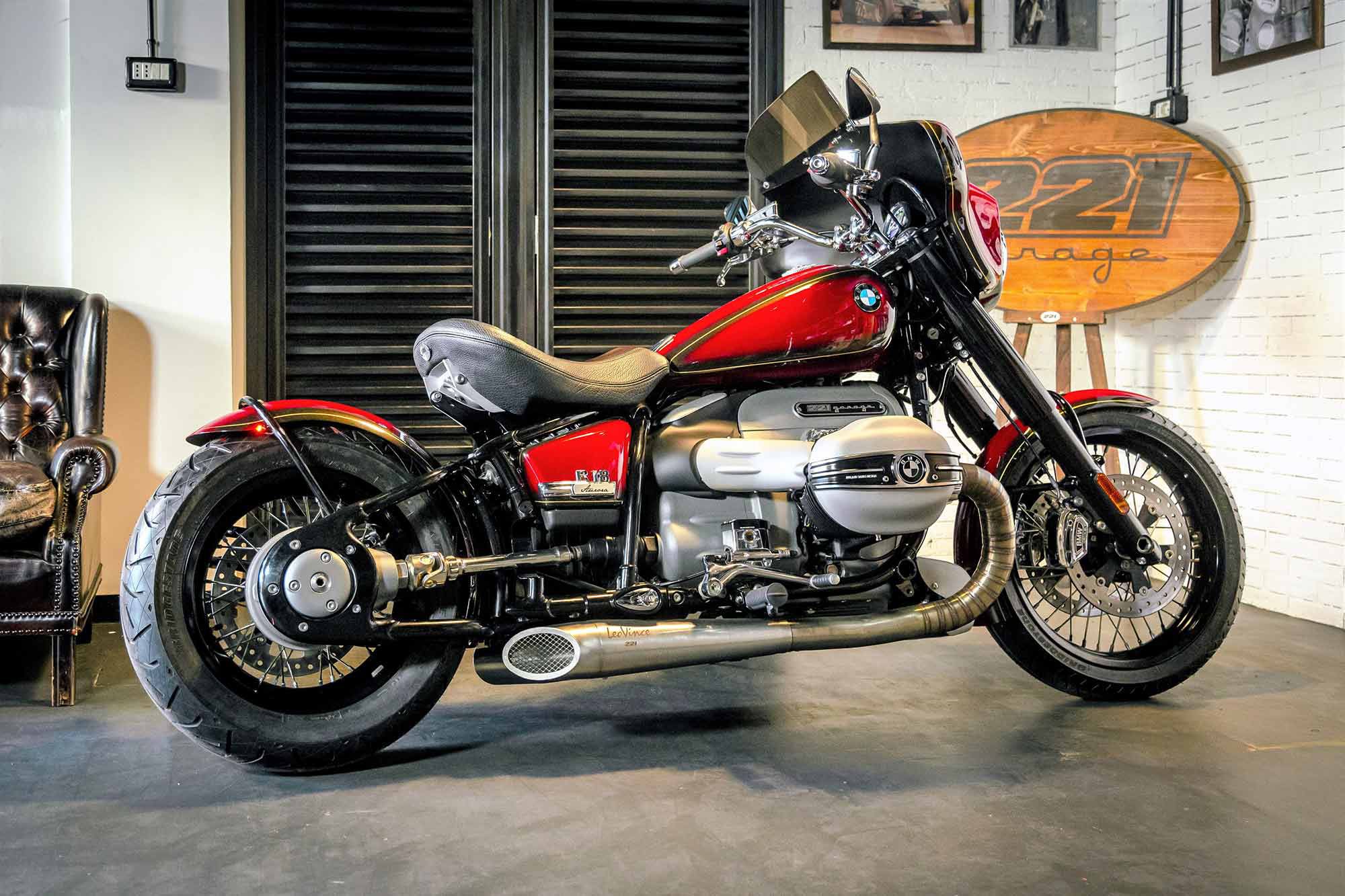 The spark for the Aurora build, meanwhile, came at the reveal of the R 18 at EICMA back in 2019 according to principal Pier Francesco Marchio of Garage 221. The project initially took inspiration from the cruisers of the 1970s, which you can see in the Aurora’s embrace of bobber and other retro elements like wraparound fenders, but it evolved from there. There’s no missing the huge “batwing” fairing, a clear nod to the Harley tourers of the era. Hmm…is that heresy on a BMW? 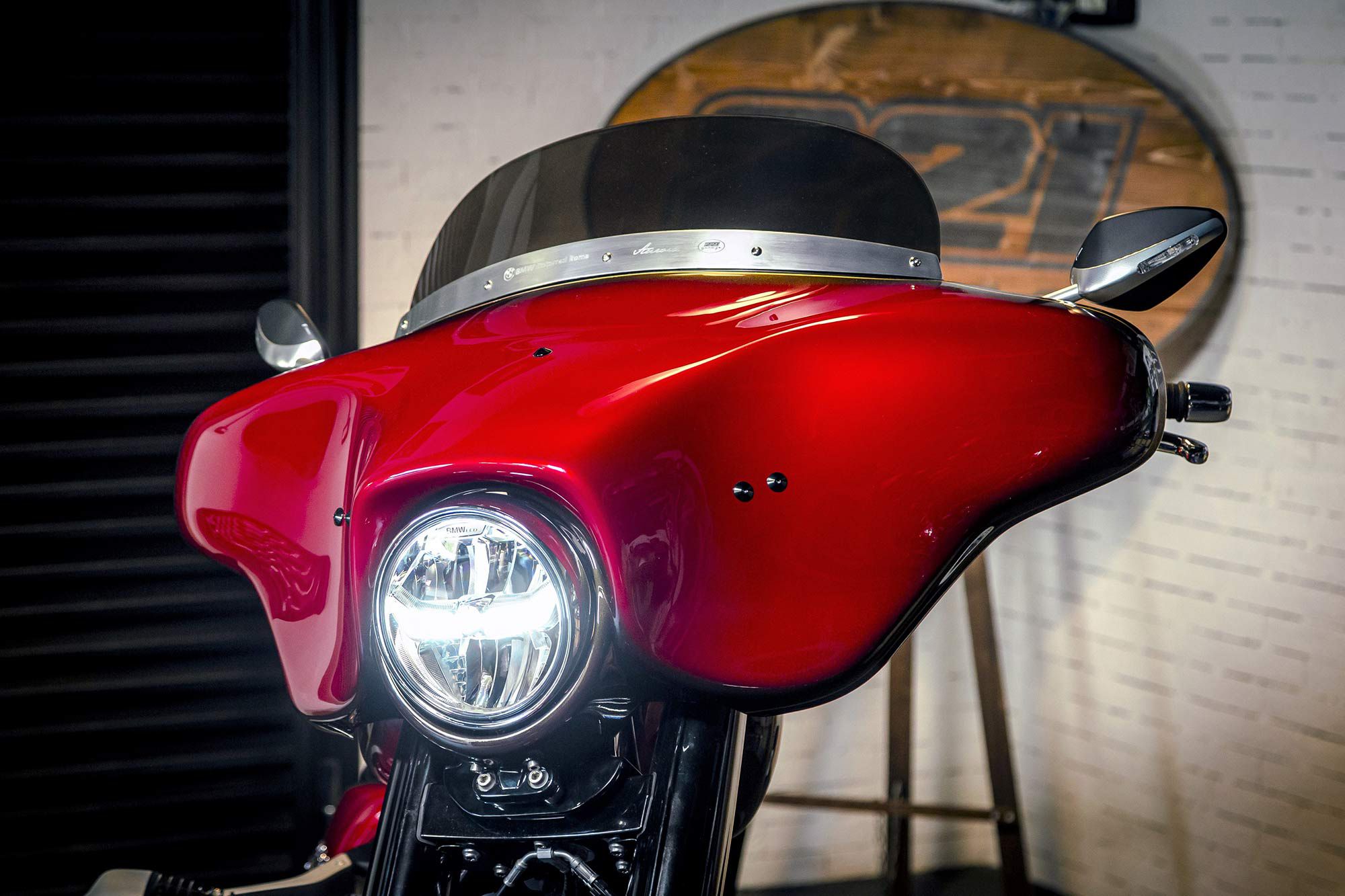 Up front the Aurora carries a clear homage to the Harley batwing. (BMW Motorrad/)

Naturally, some of the other modifications on the R 18 Aurora started as elements from other BMW models. For instance, the saddle was copped in its entirety from a BMW 1200 C; the fairing supports were made using turn signal parts for a 1982 BMW R 100; part of the rear frame of a BMW K 75 even made its way over to Aurora. Both fender supports, the saddle supports, and license plate holder are entirely handmade however. 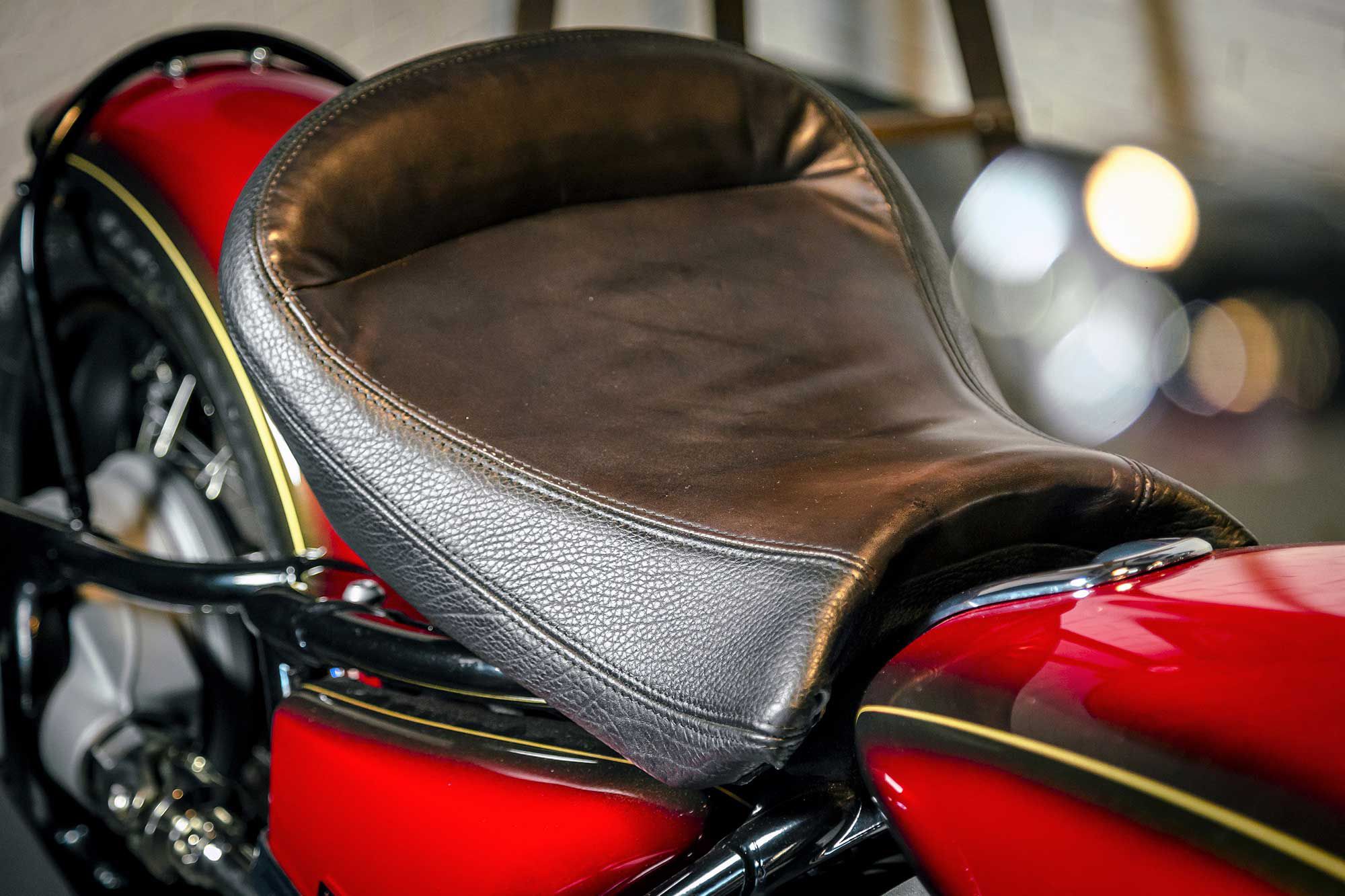 Parts from other BMWs contributed to the final build. The seat is off an old 1200 C. (BMW Motorrad/)

The stout exhaust pipes were made in collaboration with Leo Vince and made to sound even more full-throated, while giving muscular visual lines to the central area of the R 18.

Pier Francesco adds, “The textured paintwork of the cylinder head covers, the injection housings, the central crankcase, and our oil cooler grille make everything look homogeneous, creating a unique effect with the cylinder block and the bevel gear. The result is stunning.” 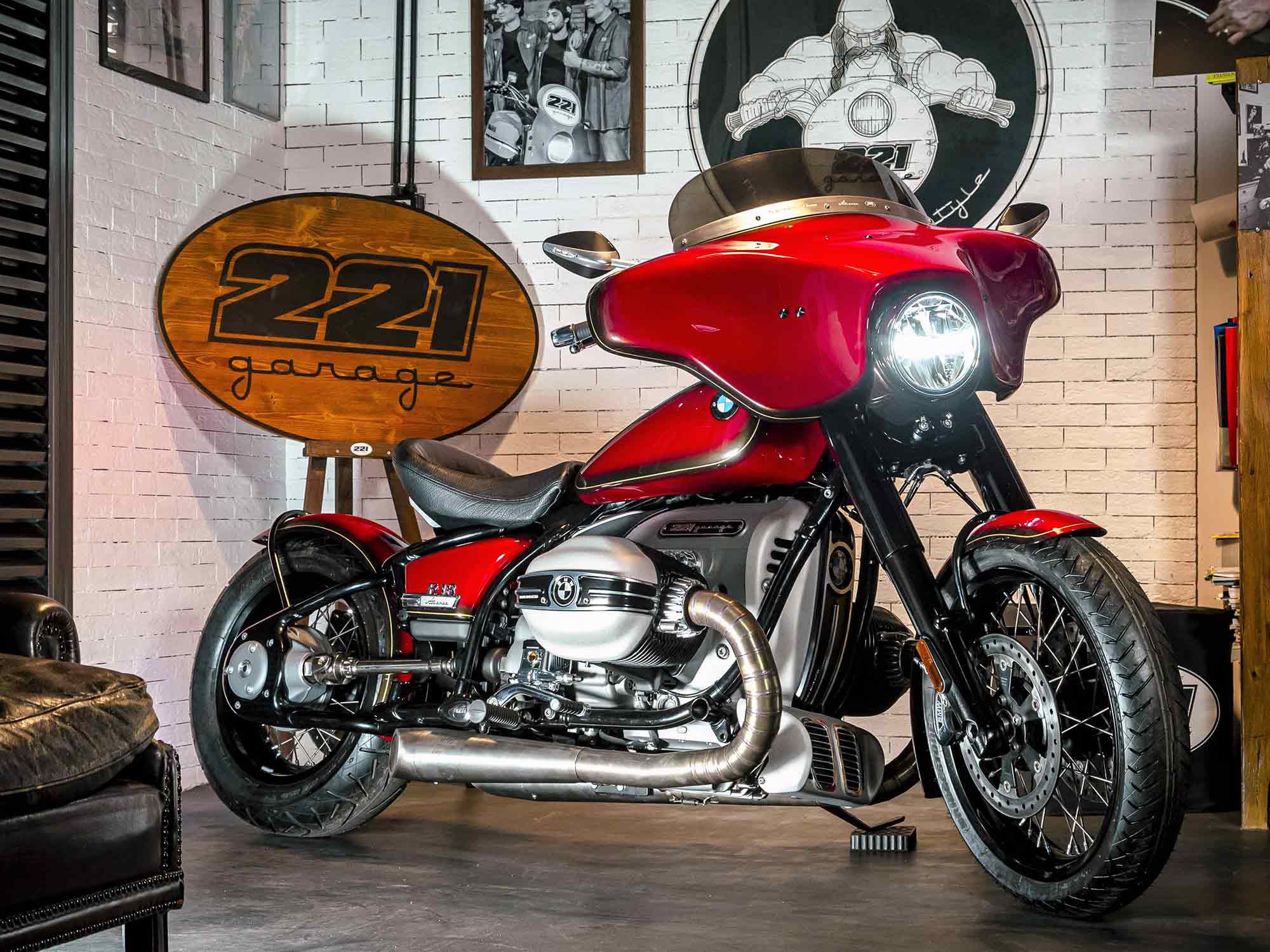 A mix of old and new on the Aurora; the oil cooler grille was inspired by 1960s-era BMW cars. (BMW Motorrad/)

Sam Sunderland Wins the 2022 Dakar Rally for GasGas (And KTM)