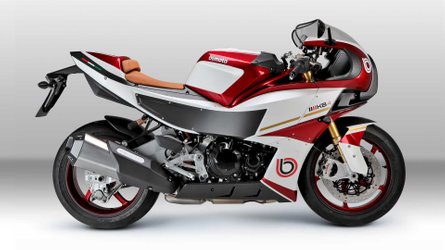 Motorcycle fans eagerly awaiting Bimota’s official introduction of the KB4 finally got what they’d been waiting for at EICMA 2021. In fact, the Kawasaki-affiliated Italian firm even gave everyone a little something extra for their trouble, by also bringing the KB4 RC out from behind its curtain. Overdelivering is usually a great way to make a positive impression, isn’t it?

We already knew that the KB4’s 1,043cc inline-four powerplant came from the Kawasaki Ninja 1000SX going into the biggest international motorcycle show of the year. With the official EICMA unveiling, however, we also learned about all its premium specs, including the full Öhlins suspension and Brembo Stylema braking setup. We also confirmed that indeed, Bimota opted to relocate the radiator so it’s tucked neatly up under the tail, since it reduced the wheelbase in part by bringing the front wheel and frame closer together.

New model introductions sometimes come with pricing information, and sometimes don’t. For anyone planning out their 2022 new motorcycle budgets around EICMA time, unfortunately Bimota didn’t provide that information. However, in confirming its Japanese dealer network, the Italian company has now posted an official MSRP—in one market, at least. It’ll cost ¥4,378,000, which works out to about $38,532 as of December 17, 2021. That price includes ¥3,980,000 ($35,029) for the bike itself, as well as an additional ¥398,000 ($3,503) in consumption tax.

Now, here’s where we caution that pricing on motorcycle models released in multiple markets is rarely ever a straight conversion between markets. However, even riders who won’t be shopping for KB4s in Japan at least have one reference point to think about before official details are announced for your local region.

According to Bimota Japan, the KB4 will be sold at Kawasaki Plaza locations throughout the country. The Kawasaki Plaza network of stores is filled with showrooms, service centers, and Kawasaki lifestyle goods meant to stimulate rider passion using all five senses, says its website. What does a motorcycle taste like, we wonder? Also, will there be a special Bimota coffee blend and pastries available while you choose your new bike options? We can only hope.