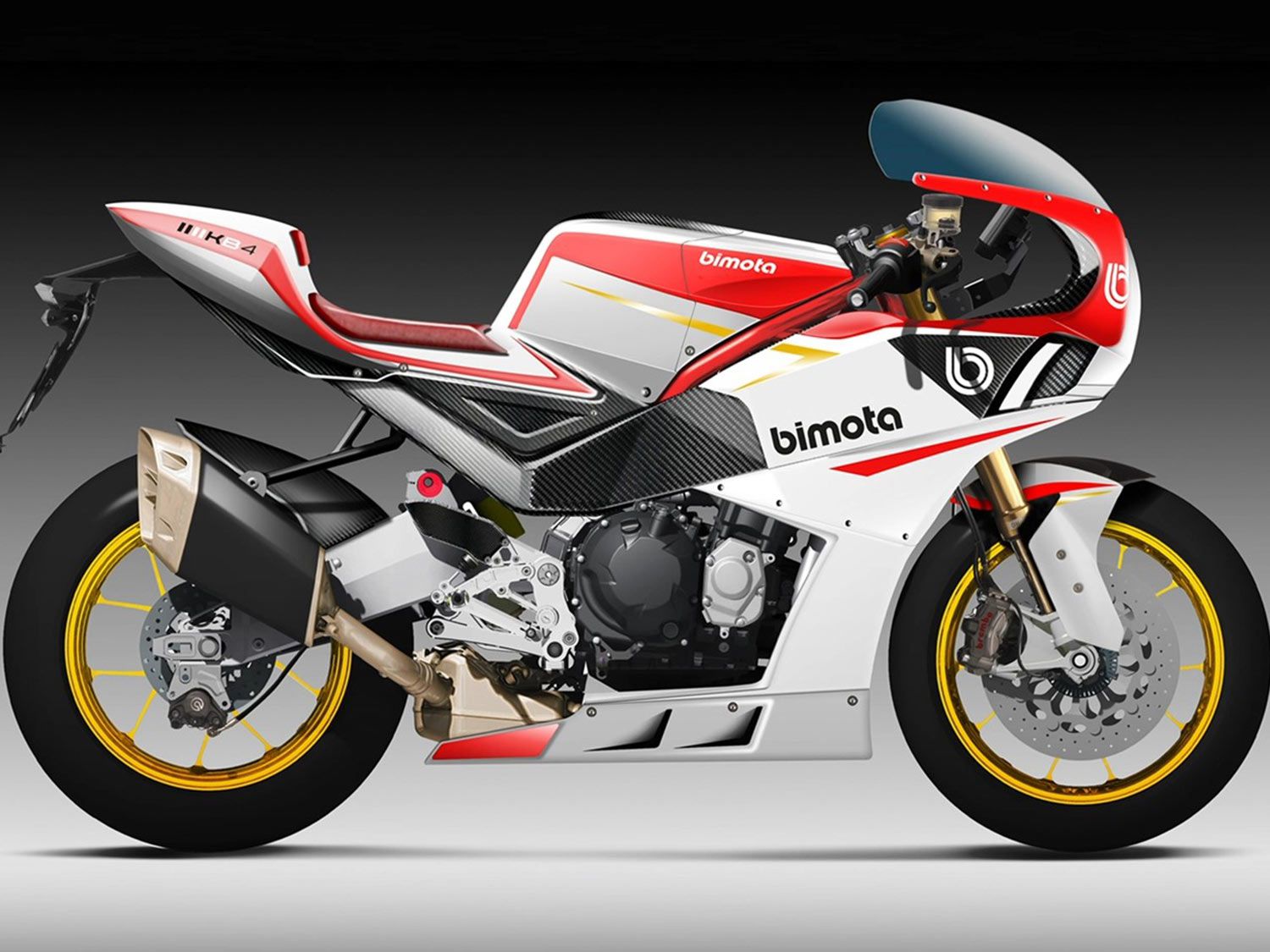 The latest on Bimota’s upcoming KB4 is that it will have a new chassis with a shorter wheelbase but keep the Kawasaki powerplant as is. (Bimota/)

Bimota’s new KB4 has been a long time coming and a host of testing photos mean there’s little we don’t know about how the bike looks, but now we’ve got our hands on some detailed specifications for the first time in advance of the bike’s official unveiling later this year. Some of the details come as no surprise, but others hint that this might turn out to be a much more impressive bike than the bare power figures initially suggested. 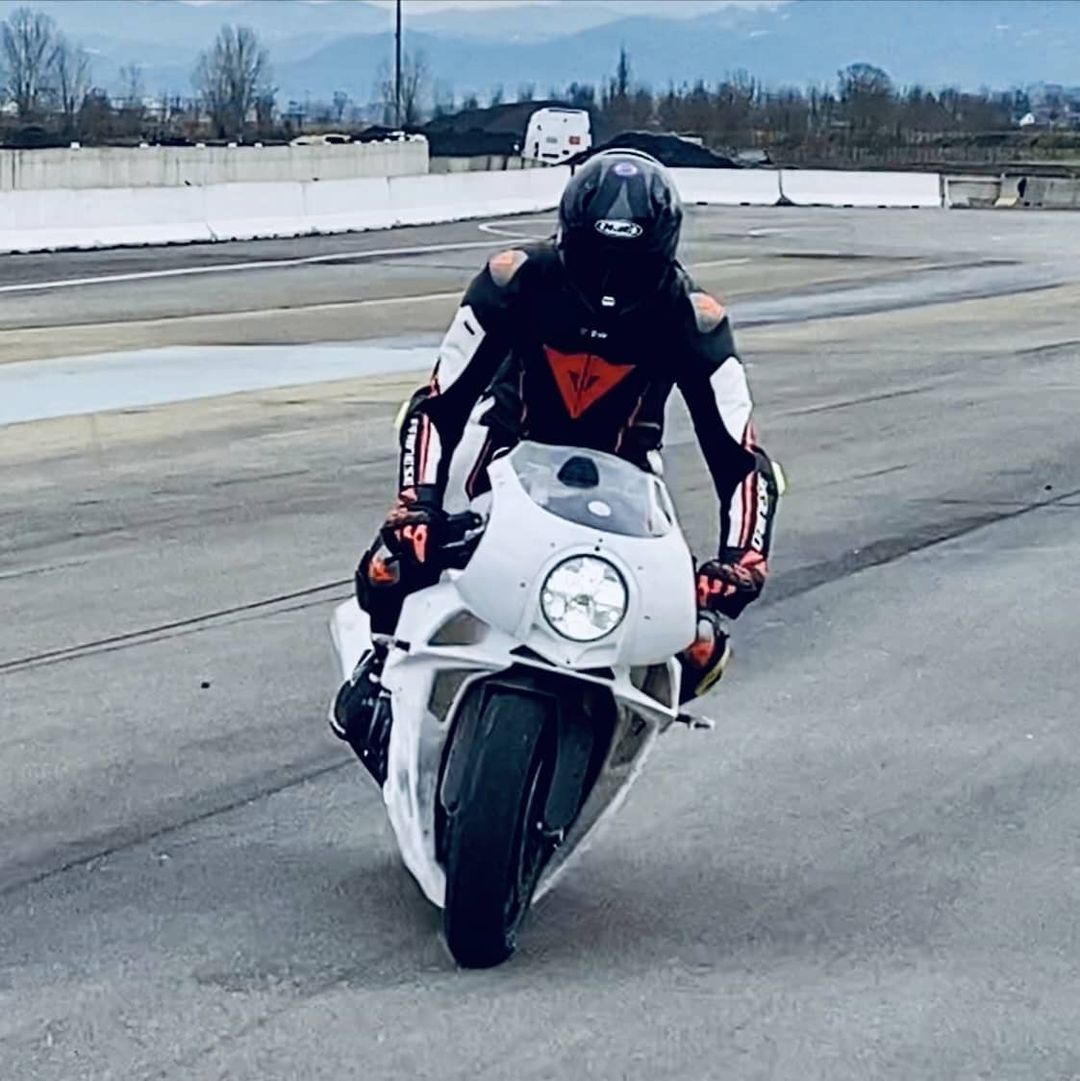 Ever since it was founded by Massimo Tamburini (the “Ta” in Bimota), along with Valerio Bianchi (Bi) and Giuseppe Mori (Mo) in 1973, Bimota’s modus operandi has been to take impressive mass-made engines and slot them into far superior frames. The initial focus was on Japanese four-cylinders, which in the 1970s combined unprecedented performance and reliability with affordability but tended to be lumbered with heavy, unsophisticated chassis designs. As Japanese chassis design improved, particularly in the second half of the 1980s, Bimota was increasingly edged out of its market niche.

With the KB4, Bimota returns to that tried-and-tested formula, taking the Kawasaki Ninja 1000 and turning it from a hefty sport-tourer into a razor-sharp sportbike. The new bike is said to be almost 100 pounds lighter than the Ninja 1000 as well, for an improved power-to-weight ratio. (Bimota/)

The technical details we’ve discovered show that in creating the KB4, Bimota added its own tubular steel and carbon fiber chassis to replace the original aluminum design, but didn’t do anything to alter the engine. Peak power remains at 140 hp (104.5kW), which maxes out at 10,000 rpm, and maximum torque is unchanged at 82 pound-feet and 8,000 rpm, and while Bimota adds its own silencers to the mix—an underengine collector box leading to a single end can on the right-hand side—the emissions performance of the engine is the same as in its Kawasaki form.

However, as a riding experience the KB4 promises to be a completely different proposition to the original Kawasaki, as it’s a full 41 kilograms (90 pounds) lighter than the Ninja 1000. The bike comes in at 194 kilograms (428 pounds) ready to ride, including fuel, compared to 518 pounds (235 kilograms) for the European-spec Ninja 1000 measured under the same conditions. 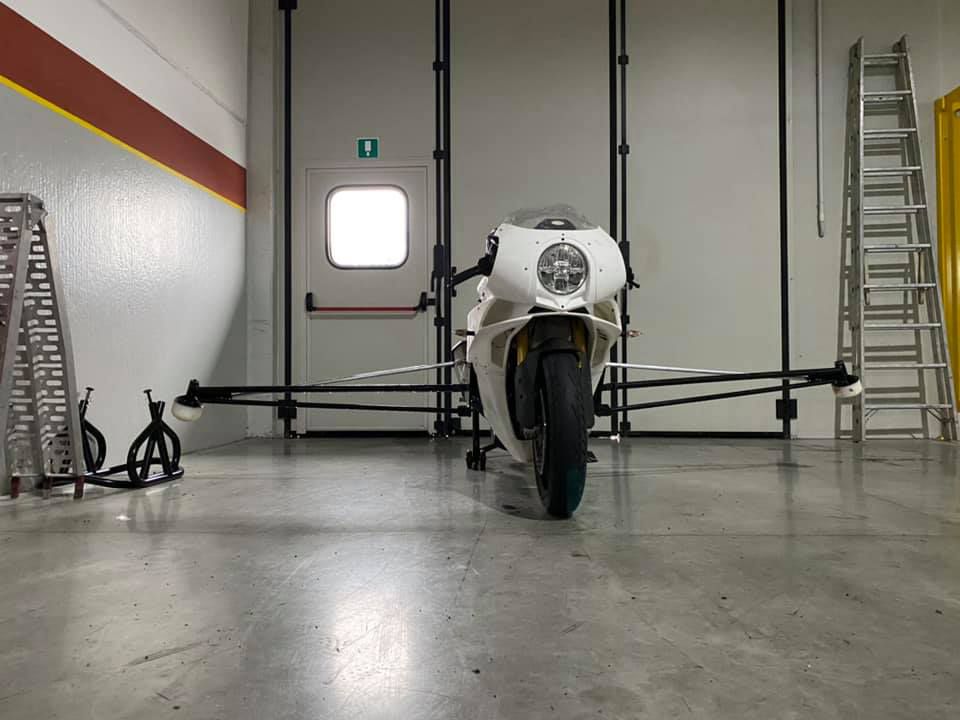 Where’s the radiator? Based on what we can see in the leading image and other clues, it looks to be under the seat. (Bimota/)

That last change is the most impressive, and it looks like Bimota has achieved it in an unconventional way. While the firm could simply use a shorter swingarm, that would tend to push the weight distribution rearward, which would be undesirable from a handling point of view. Instead, the company appears to be moving the front wheel backward, closer to the engine. Easy enough, you might think, but such a move would make the front wheel hit the radiator as the suspension compresses—unless Bimota moved the radiator. And that’s just what the firm has done.

Combining the knowledge of the shortened wheelbase with images of the prototype KB4, it becomes clear that the radiator isn’t in its normal spot. The bike has large air intakes on either side of the fairing—too big to be simply feeding the airbox—and a carbon fiber tunnel wrapped around the frame tubes running from the intakes to the bike’s self-supporting carbon seat unit.

The implication from the design is that the radiator is under the seat, like that of a Benelli Tornado, which had similar ducts around the frame. The legendary Britten V1000 also has the same arrangement. Bimota’s official sketch of the bike suggests the exposed radiator sits under the seat, keeping its mass central, slanted at a steep angle to follow the slope of the tail unit. There’s a noticeably large hugger over the rear tire—a 190/50ZR-17, according to the approval documents—to make sure rocks aren’t thrown into the cooler.

We’re likely to finally see the KB4 debut at the EICMA Show this November. (Bimota/)

Since the KB4 has now been granted EU type approval, its official launch is likely to be very close—with November’s EICMA Show in Milan the probable location for its debut.