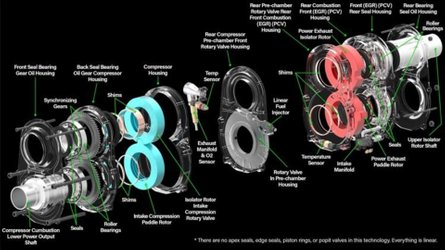 At this point, a lot of us are starting to come to terms with the eventual demise of the internal combustion engine. With electric powertrains and battery technology advancing at lighting speed in recent years, developing, building, and ultimately owning an electric motorcycle is now cheaper and more convenient than ever.

That being said, the internal combustion engine will certainly be here for several more years to come—even after the proposed 2035 ban on new gas-powered machines. Several companies, including some of our favorite motorcycle and car makers, have been lobbying for gas-powered engines to remain in existence. At the same time, it would appear that the good old ICE has yet to swing its swan song. Well, at least, this is what Astron Aerospace believes with its newest creation, the Omega 1.

The Astron Omega 1 is a one-of-a-kind design. Astron has divided a four-stroke engine’s four strokes into two independent chambers, with a pre-chamber in between. Two primary shafts are stacked vertically and coupled with synchronizing gears so that they rotate at the same RPM in opposite directions. Four rotors are placed on the two shafts and run in two pairs, one on the front end for intake and compression strokes and the other on the back end for combustion and exhaust strokes. A rotary disc valve and a pre-chamber are located between the two sets of rotors.

If you’re thinking what I’m thinking, that this motor resemblers a Wankle rotary engine, you’d be right. However, Astron claims that it doesn’t suffer from sealing issues, and is a completely linear unit. Now for those of you who aren’t engineers, myself included, it can be rather difficult to visualize all this. To help, Astron Aerospace has made this extremely detailed video, showing just how it all comes together, and how the entire system works. It’s pretty impressive, really. Furthermore, given its compact construction, the Omega 1 can be built to different sizes in order to suit a variety of applications.

Do note, however, that Astron Aerospace has not explicitly stated that this engine is meant for motorcycles. However, given its theoretical versatility, it could certainly power two-wheelers if it becomes a reality. According to Astron Aerospace, The Omega 1, in its current form, tips the scales at just 15.9 kilograms and produces a whopping 160 horsepower and 170 pound-feet of torque. It idles at 1000 RPM and redlines at 25,000 RPM. Astron says that the company has  created a working prototype and claims that it can operate on a variety of fuels, with very low emissions.

No doubt, it will certainly be interesting to see an engine so small, yet with so much power, become a reality. If Astron Aerospace’s technology makes it to production, it could very well change the game, not just in terms of mobility, but energy usage in general. Of course, all the figures in this article are merely claimed by Astron Aerospace, and have yet to be tested in real-world application. As such, I’m guessing it’d be best to wait and see what developments Astron Aerospace continues to make in the near future.