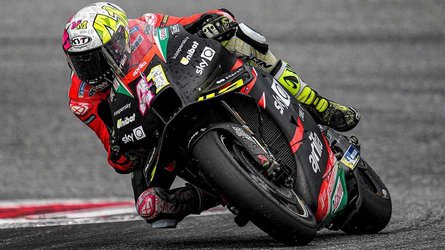 After a stressful exit from the Yamaha Race Team, Aprilia state that it’s important that Maverick Viñales gets comfortable with the Aprilia team first before a 2021 debut with the racing team will be set.

Viñales made headlines after allegedly trying to damage his M1 race bike in the Austrian round of MotoGP. He subsequently apologized but was ultimately suspended then formally parted ways with Team Blue.

Following the incident and the unfortunate outcome, Viñales is set to join Aprilia and its race team for the 2022 season. Aprilia mentioned that it will field Viñales in a two-day test at Misano next weekend and is gunning to get the Spaniard on the track as soon as possible, but are taking things a little slow to get the team integrated as much as possible.

Massimo Rivola, Aprilia Racing’s CEO, stated that the folks over at Aprilia “don’t want to rush too much.” However, he said in a prior statement that “Yeah, it is a big opportunity because, in fact, the test we do next is just for that purpose. The sooner we put him [Viñales] on a bike, the better it is for next year.”

It looks like Viñales’ Misano test will be crucial. Rivola added: “For sure [after] the test we will decide what to do, but obviously having him on the bike racing would be a further step.”

Aprilia’s roster will have to make way for Viñales’ entry next season. Lorenzo Savadori will be replaced by Viñales, who Rivola believes is one of the top riders in MotoGP at the moment. Savadori recently underwent knee surgery following a fiery crash at the Styrian round of the GP, which led him to withdraw from the British GP.

Rivola praised Savadori stating: “I have to say Lorenzo is doing a good job so far because he’s coming from a totally different world and he’s growing race by race. So, if we have this opportunity, it’s not against Lorenzo but in favor of Maverick.”

Dovizioso Will Return To MotoGP At Misano Under SRT