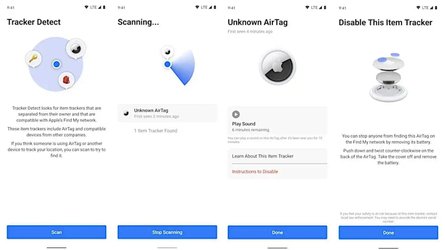 In early December, 2021, the York Regional Police in Ontario, Canada, reported that thieves had been using Apple AirTags to track luxury vehicles in order to steal them. For the nefariously-minded, that math makes total sense. While Apple says its intention was to help Apple users find their own lost keys, luggage, wallet, or other commonly misplaced items, the company also acknowledged that some people might use them for less savory purposes.

That’s why, back in June, 2021, Apple mentioned that it was working on an app to help non-Apple users also detect unwanted AirTags around them. For those unfamiliar with how AirTags work in the first place, they utilize Apple’s Find My tracking network to track the location of whatever they’re attached to. Once paired with your Apple device, and then tucked inside your backpack/wallet/other item, they’re meant to alert you via other nearby devices on the Find My network if you and your tracked item are no longer together.

Unfortunately, even the best intentions can’t account for how people will always use a thing. AirTags are tiny, inexpensive, and could easily allow someone to use them like those Canadian car thieves have reportedly been doing, not to mention their potential use in the hands of stalkers. On December 13, 2021, Apple followed through on its promise to release an Android app that allows Android users to scan and find unwanted Apple AirTags in their immediate area.

As it currently stands, this app must be activated manually, and there’s no way to set it to perform scans in the background, or at some user-determined regular interval. It’s not clear if those features could come at some point in the future. It also clearly won’t help anyone who’s sworn off modern technology entirely and doesn’t use either Apple or Android devices. However, it may be some amount of comfort to some Android users that this app now exists.

Apple’s most recent AirTags software update changed the timing of the alert chime that sounds if an AirTag is separated from its owner, so that it will begin to make noise at a random time between eight and 24 hours after it first senses that separation. Without using either an Apple device or an Android device with Tracker Detect actively searching for orphaned AirTags, you’ll apparently just have to hope you’re around to hear that chime if it’s placed in your belongings without your knowledge.