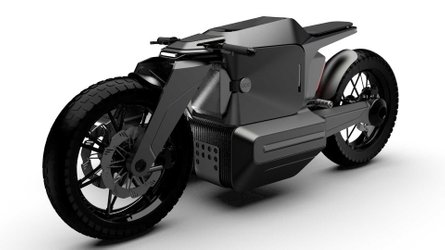 On November 1, 2021, Norwegian electric motorcycle startup AOE Mobility unveiled the first design renders of the aptly named AOE Bike, its first-ever vehicle. The design itself is striking, but it also looked familiar in a way I couldn’t quite place at first. There’s a perfectly good reason for that, though—let me explain.

2020 may feel like it was several years ago, but I have to keep reminding myself that it was, in fact, only last year. Anyway, back in May, 2020, designer Iago Valiño posted an electric motorcycle concept with a sidecar on his Behance portfolio. At the time, he described it as a 3D-rendered concept inspired by BMW Motorrad and El Solitario MC.

Concept drawings and renderings are often both inspiring and frustrating. The trouble is, if and when vehicles based on concept designs finally make it out into the world, they don’t always bear much of a resemblance to what made you love them in the first place. It’s somewhat bittersweet because while you’re happy the design exists, you’re often left disappointed if you never get to see it fully realized.

Back to Valiño’s design, which is in fact what the AOE Bike is based on. According to Valiño, AOE purchased the design from him so that they could get investors excited about the company’s future plans. While it’s still no guarantee that we’ll ever see this exact design enter production, it does seem as though it could at least be one step closer to realization.

Now, what’s the deal with Norwegian startup AOE Mobility? As you may already be aware, in November, 2021, Norway has seen the greatest adoption of electric vehicles on its roads of any European country so far. In fact, according to Statistics Norway, a total of 340,002 electric passenger cars were currently registered for use on Norwegian roads by the end of 2020. That’s in a country made up of about 5.379 million people, so it’s certainly not an insignificant number.

Here’s the thing, though. While plenty of news stories have focused on Norway’s electric vehicle adoption, particularly as compared to other markets, so far, it’s mainly been about cars. To be fair, there simply aren’t as many choices of electric motorbikes on the market—nor are many of them as practical and/or affordable as potential EV owners would like them to be.  To illustrate, Statistics Norway showed registrations of just 2,688 electric mopeds in 2020, along with 128 light motorcycles and 1,701 heavy motorcycles.

Long story short, AOE Mobility wants to bring electric motorbikes to its home country—and then expand internationally. In AOE Bike release materials, the company says that it envisions eventually selling this bike throughout Europe, North America, and China in the future. There’s no exact timeline at the time of writing, but you have to start somewhere.

When you lay out the facts of Norway’s EV adoption so far, it’s not hard to see where any company might see the niche as a good place to stake its claim. It’s a young company, and there’s no telling where it will go from here, but we’ll be curious to see how it all plays out.

MotoGP Preview of the Jerez Test: A Lot of Work Awaits in Andalusia