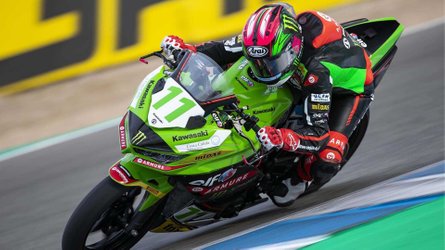 The following year, in 2018, the Provec Kawasaki rider made headlines again by becoming the first woman to win a road racing world championship with the WorldSSP 300 title. Unfortunately, Carrasco battled a spinal injury in 2020, but returned to the top step at the 2021 Misano round. That marked Carrasco’s final victory in the class, as both the rider and Kawasaki officially announce number 11’s departure.

“Racing is tough, not just on track where people see but also at times like this when you have to make tough decisions,” explained Carrasco. “My ambition is always to grow as a rider, to set myself new goals that others see as impossible, and to achieve them.”

Carrasco faces a challenging task ahead though. During the rider’s first stint in Moto3 from 2013-2015, she only collected 9 points and raced for three different teams. With frontrunners Dennis Foggia and Sergio Garcia continuing to push the pace, reacclimating to the Grand Prix series will also take some time for the 2018 WorldSSP 300 champ.

In order to stay fit before the first pre-season test, Carrasco participated in the official Superbike World Championship (WSBK) test at the Jerez circuit aboard a Kawasaki Supersport 600cc. While Carrasco has unfinished business to tend in Moto3, that doesn’t make her departure from WorldSSP 300 any easier.

“This opportunity to ride in Moto3 is a logical step in my mind even if the emotional step is hard,” Carrasco added. “I would like to thank everyone at Kawasaki who truly made me feel part of a racing family, of course to my pit crews and team staff across these years who gave me the best machinery to compete on plus Provec who created a professional environment that was just incredible.”

With Carrasco back in a Moto3 saddle, we can’t wait for pre-season tests to begin.