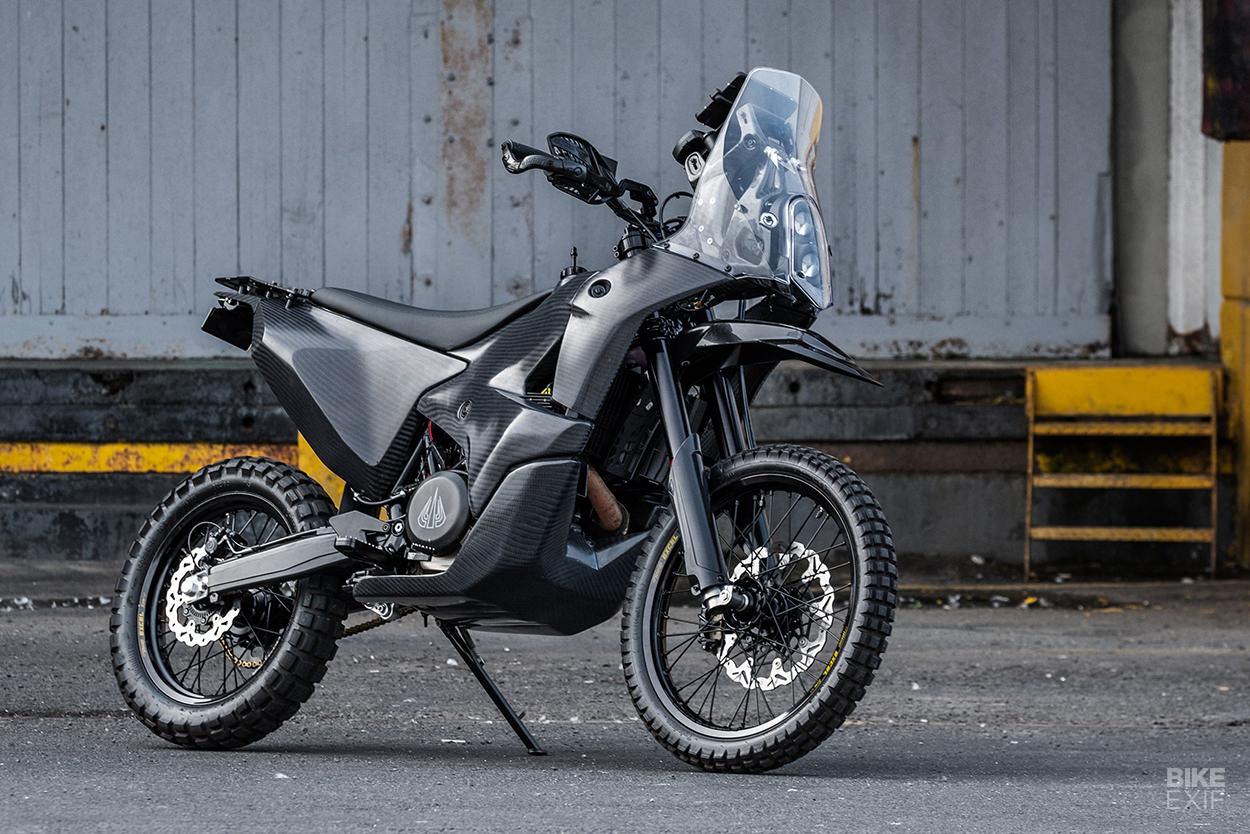 What’s your idea of the perfect adventure motorcycle? For some, it’s a liter-plus globetrotter loaded with tech. For others, it’s a monkey bike that can also fly. But for Gareth Hadden, it’s this carbon-clad Husqvarna 701 Enduro called ‘Alchemy.’

An English ex-pat living in Cape Town, South Africa, Gareth earns his keep as an event and production designer in the entertainment industry. So he’s good at two things: finding skilled people to work with, and obsessing over the tiniest of details. Which is precisely why his rally-inspired Husky turned out so good. 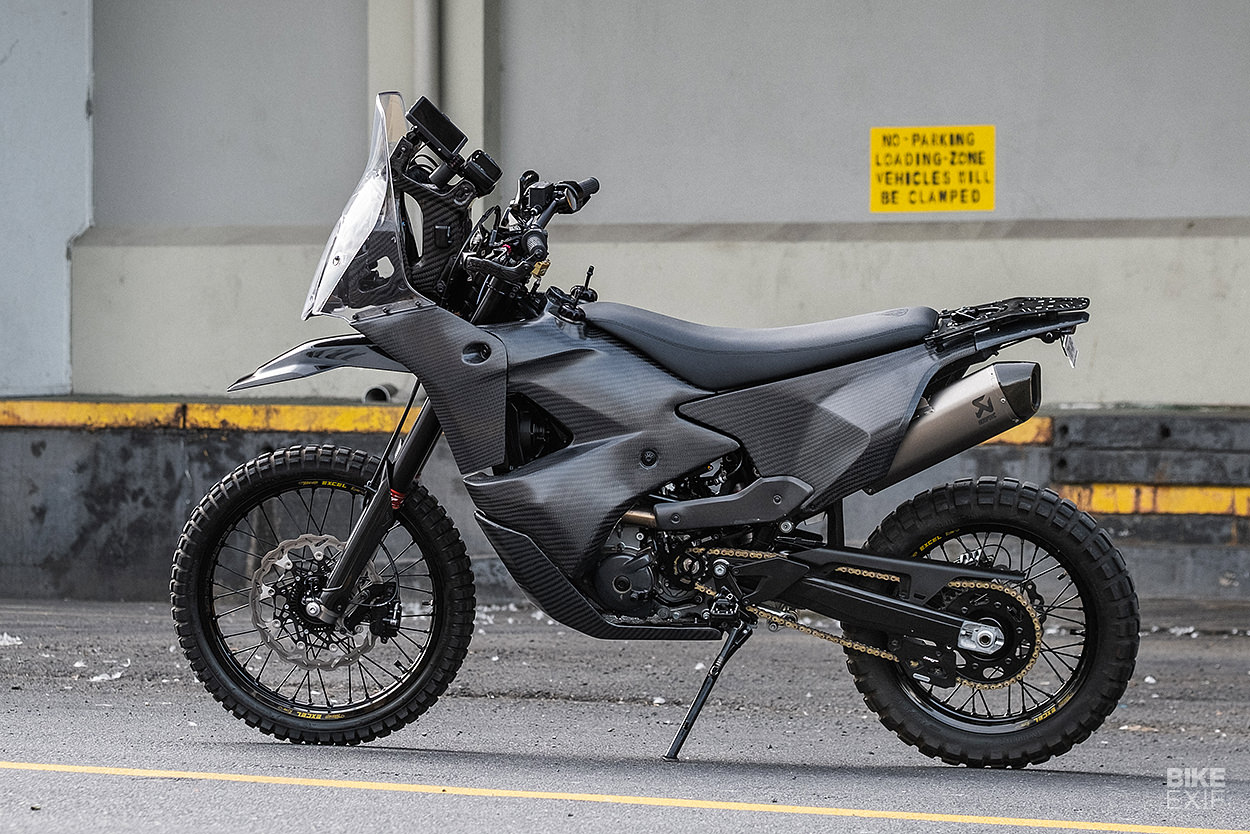 Ironically, Gareth didn’t originally set out to create an adventure bike. His original plan was to build a streetfighter around a stonking Suzuki GSX1400 power plant. But then he bought a BMW R1200GS Adventure, got into adventure riding, and changed tack.

Looking for something less heavy and more nimble, Gareth noticed a Husqvarna 701 Enduro built and owned by Mark Johnston of Johnston Moto. So Gareth bought a brand new 701 and roped Mark into the project. 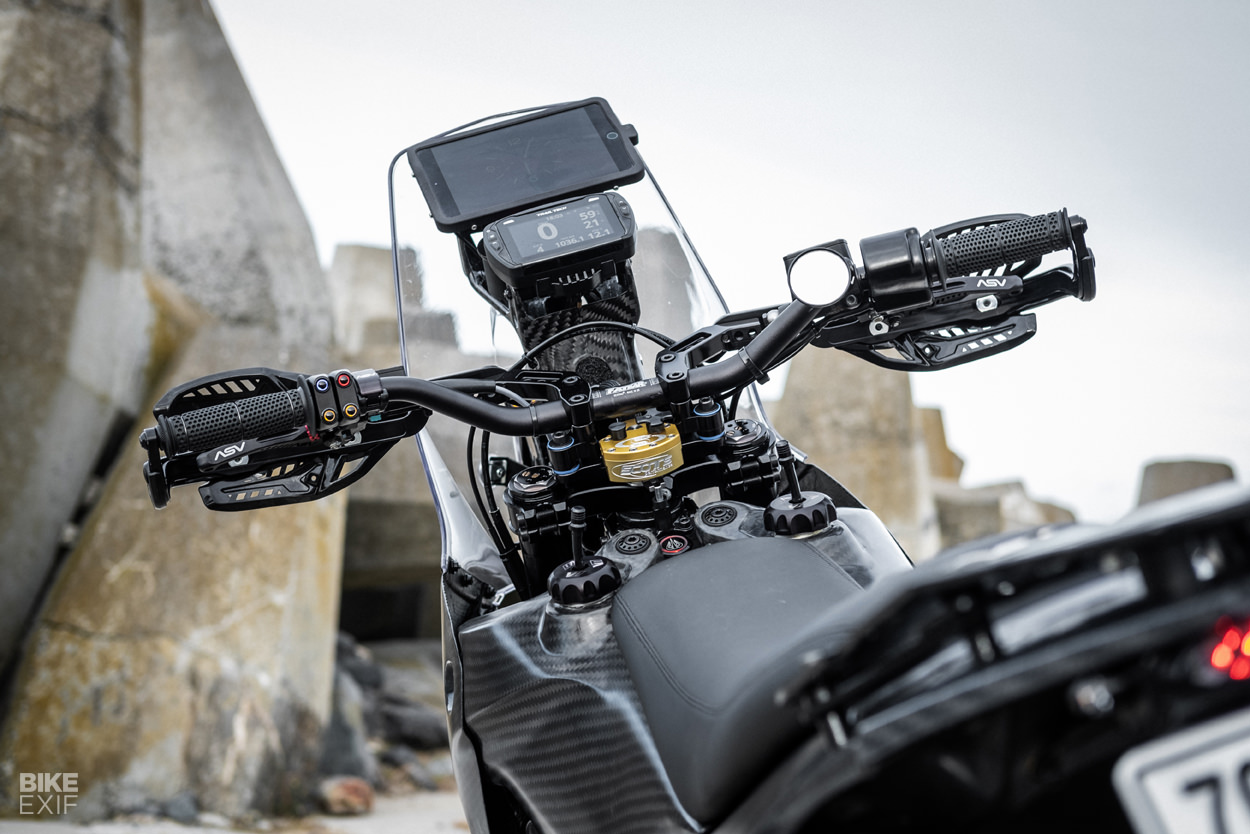 “My role was vision, sourcing, budget and coffee,” says Gareth. “Mark was amazing—he definitely had input, and all the actual hard work was him. He understood my vision and my design criteria: clean, simple and minimal.”

Mark’s 701 was sporting bodywork from Omega Fibre—a company in Johannesburg specializing in composite fiber rally kits for enduro bikes. Omega uses a mix of carbon fiber, Kevlar and fiberglass to produce their kits, but Gareth had one special request. Since brightly colored race liveries aren’t to his taste, he wanted the whole thing done in a matte raw carbon fiber finish. 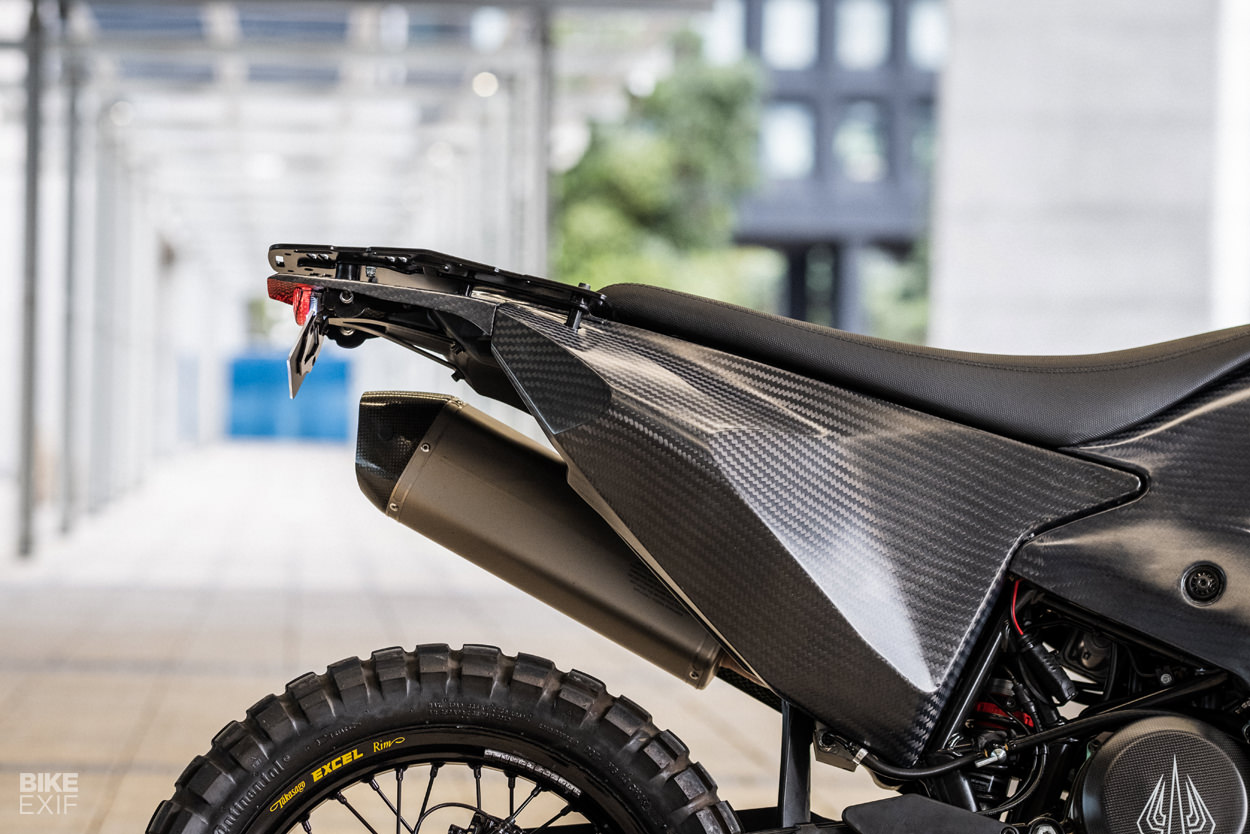 “Thomas Eich at Omega Fibre is amazing,” says Gareth. “He’s made only one other kit in raw form, and it took a lot of persuading to build another one—but I managed. It was the best kit for me, and the fact it was local was a winner.”

The kit includes two seven-liter tanks up front, with a fuel pump linking them to the stock 13.5-liter tank under the seat. That’s a whopping total capacity of 27.5 liters [7.3 gallons]. It’s all plumbed in ith upgraded hoses and fuel filters, and topped off with a set of billet aluminum gas caps from Vanasche Motorsports. 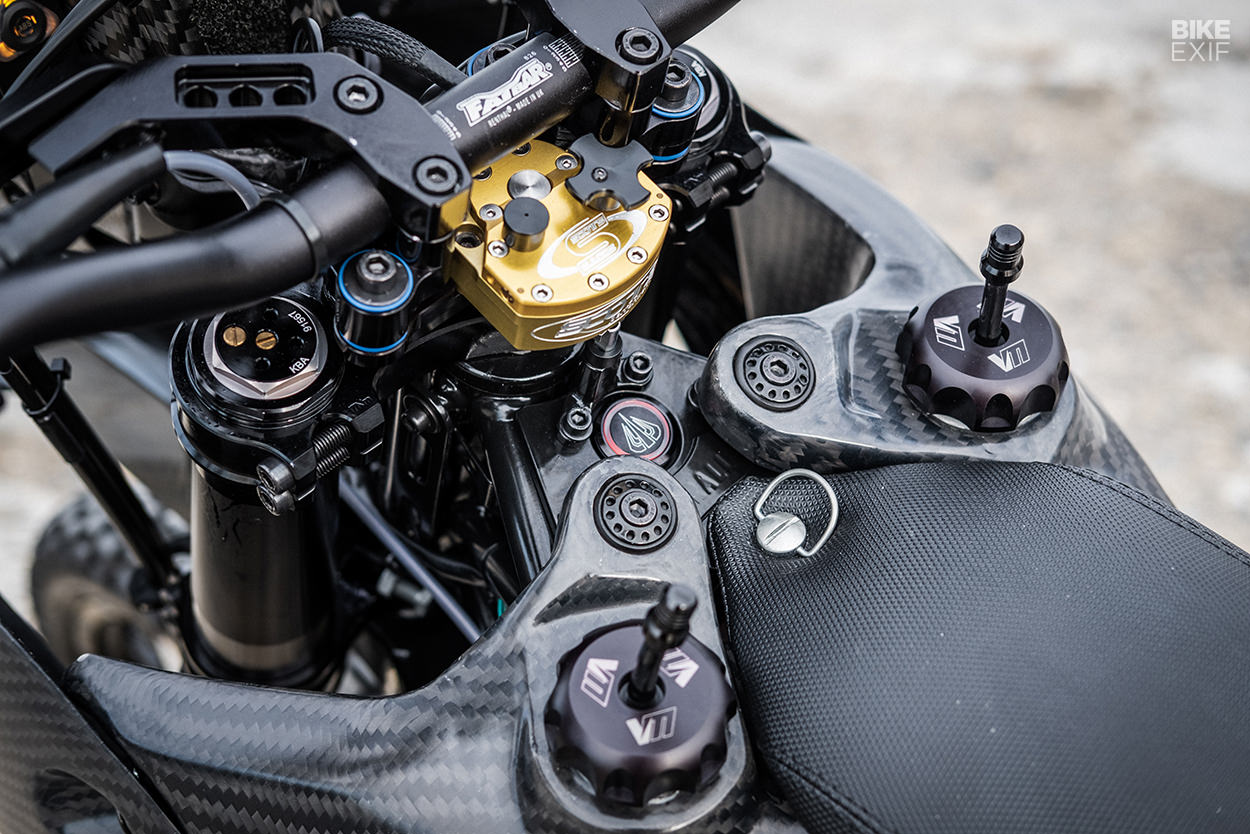 The Omega kit also comes with a carbon fiber navigation tower and windscreen. But since Gareth isn’t planning on entering any rallies, he’s kitted out his cockpit for road use. At the bottom is a Trail Tech Voyager Pro GPS-enabled dash, with a row of custom warning lights above it, and an Apple iPad higher up.

The iPad’s mounted in a special bracket, machined by a friend, Roland Peelen. It runs a navigation app, Spotify for music (linked to in-helmet Bluetooth comms), and a clock app from Gareth’s favorite watch company, Panerai. 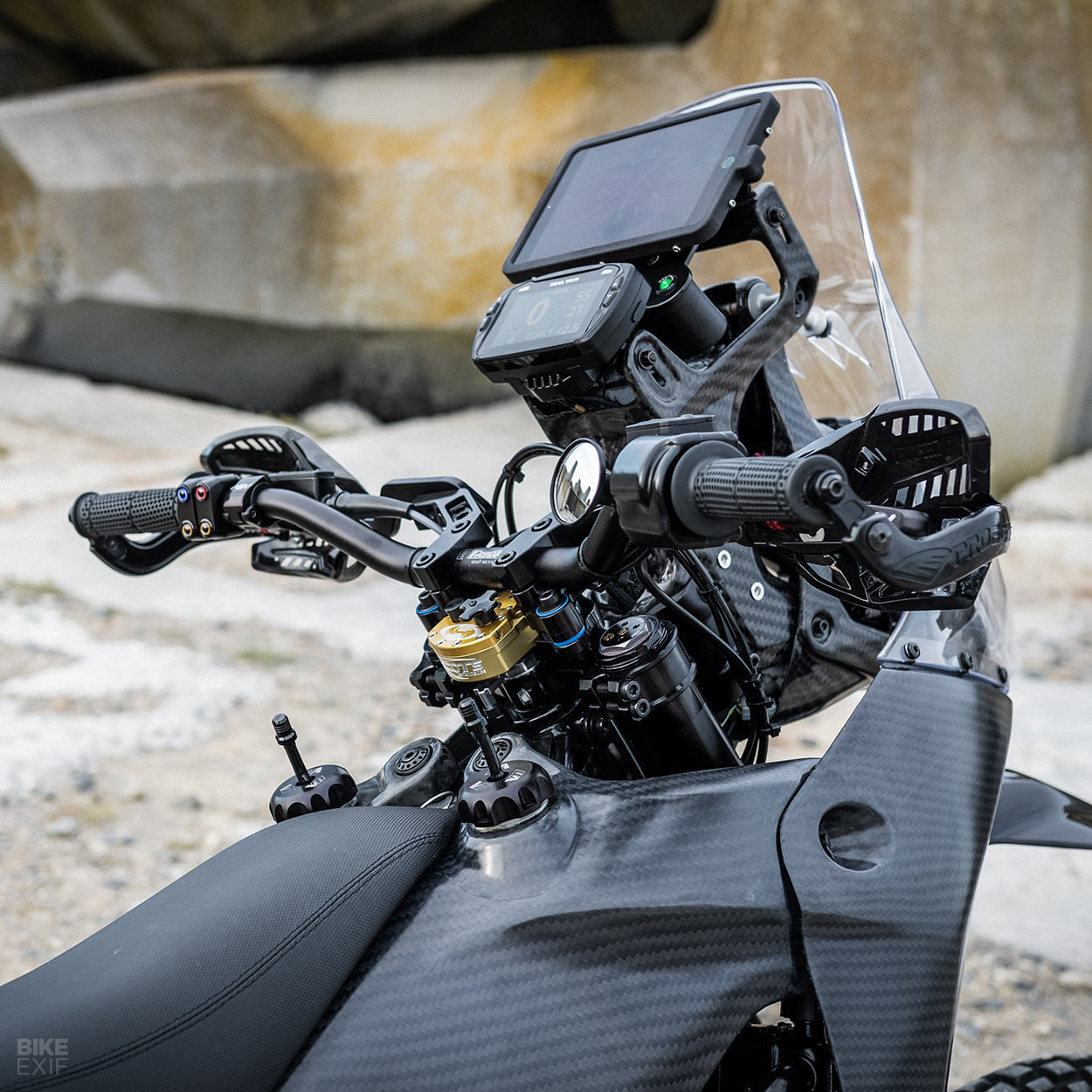 The control area features a set of Renthal bars on BRP risers, with Cycra hand guards in all-black trim, and ASV controls. The starter button’s been laser engraved with Gareth’s personal logo and is surrounded by an LED ring. The CNC-machined switches, which were imported from Russia, are lit with color-coded LEDs.

Further back is a custom seat from another local company, Nithrone, featuring the same logo as the starter button. Behind it is a custom luggage rack, with an upgraded LED tail light poking out the back. But it’s underneath the seat that things get really interesting. 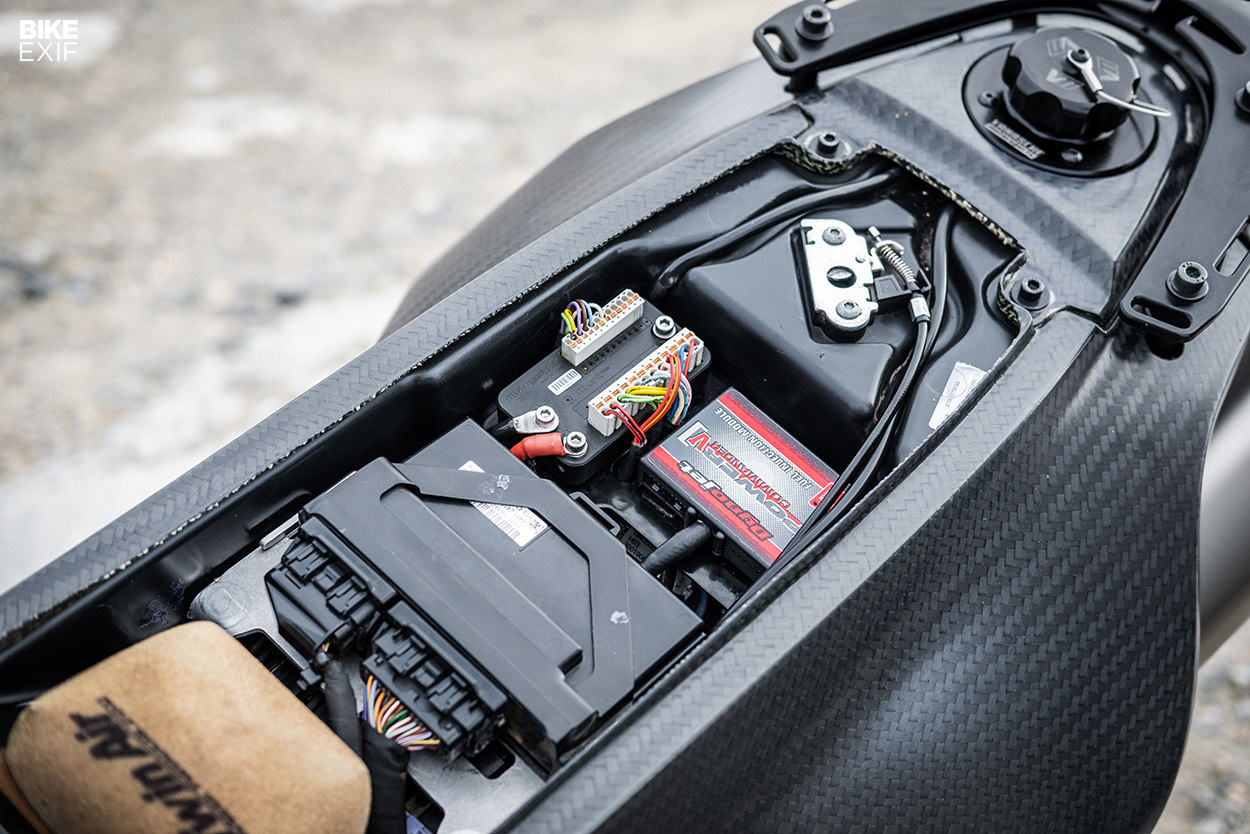 There you’ll find a Twin Air dual layer foam filter, a Bluetooth-enabled controller from Motogadget, a Dynojet Power Commander ECU and the bike’s core electric bits, packaged together like mechanical Tetris. There’s an Antigravity Lithium-ion battery in the mix too, and the whole wiring loom was scratch-built by Mark.

Mechanical upgrades include an Akrapovič exhaust, a Rottweiler intake system, and an upgraded clutch from Oberon. There’s also a WP Suspension cone valve kit in the forks, along with a Scott’s steering damper to keep things civilized. The bike rolls on a custom wheel set from Talon Engineering with Excel rims, and the brakes have been beefed up too. 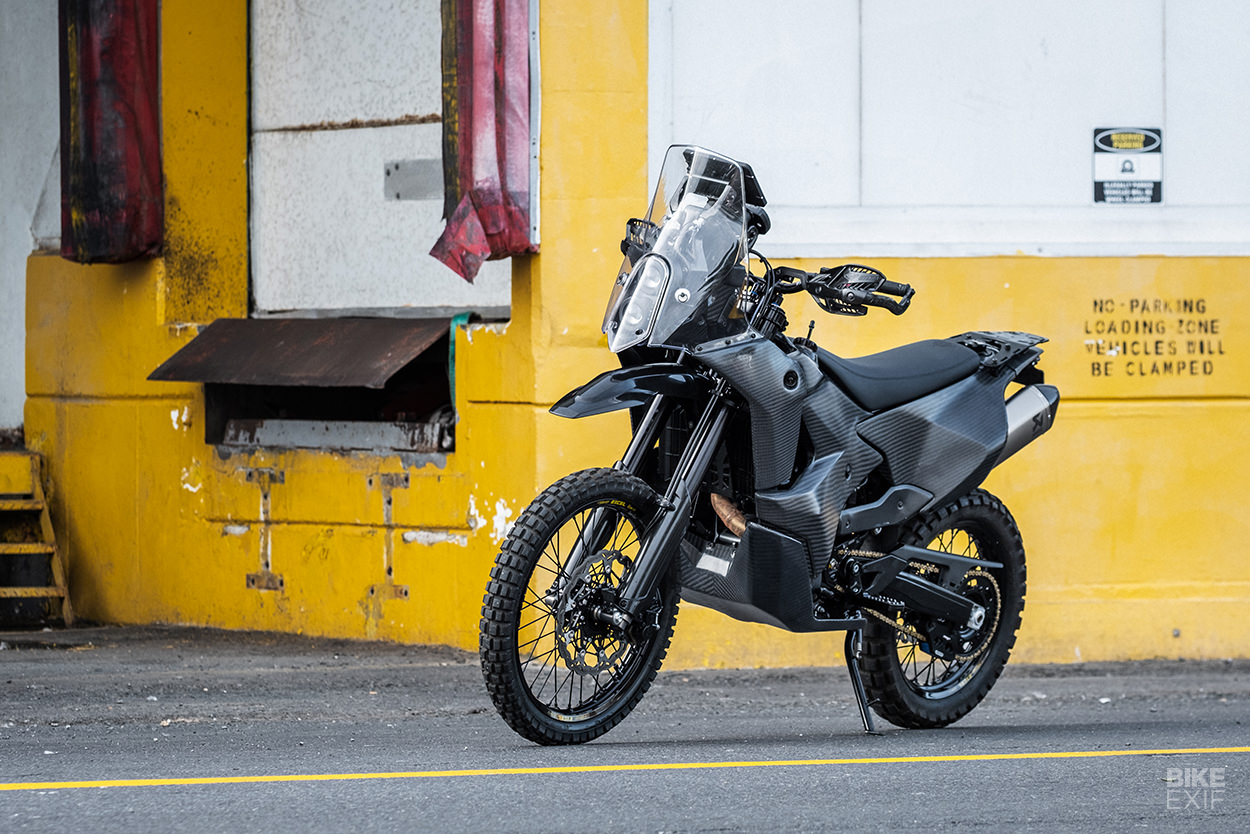 The full parts list is too exhaustive to print in full. Noteworthy additions include a new front fender and fork protectors from Cycra, a Hammerhead gear shift lever, and a case saver, rear brake guard, brake pedal and foot pegs from Vanasche. Tiny Motogadget turn signals round out the package.

Gareth’s 701 is the motorcycle many of us dream of owning: a machine that’s truly bespoke, with every minute detail tweaked to perfection. And for someone, that dream might just come true—because Gareth is putting it up for sale. Tempted? 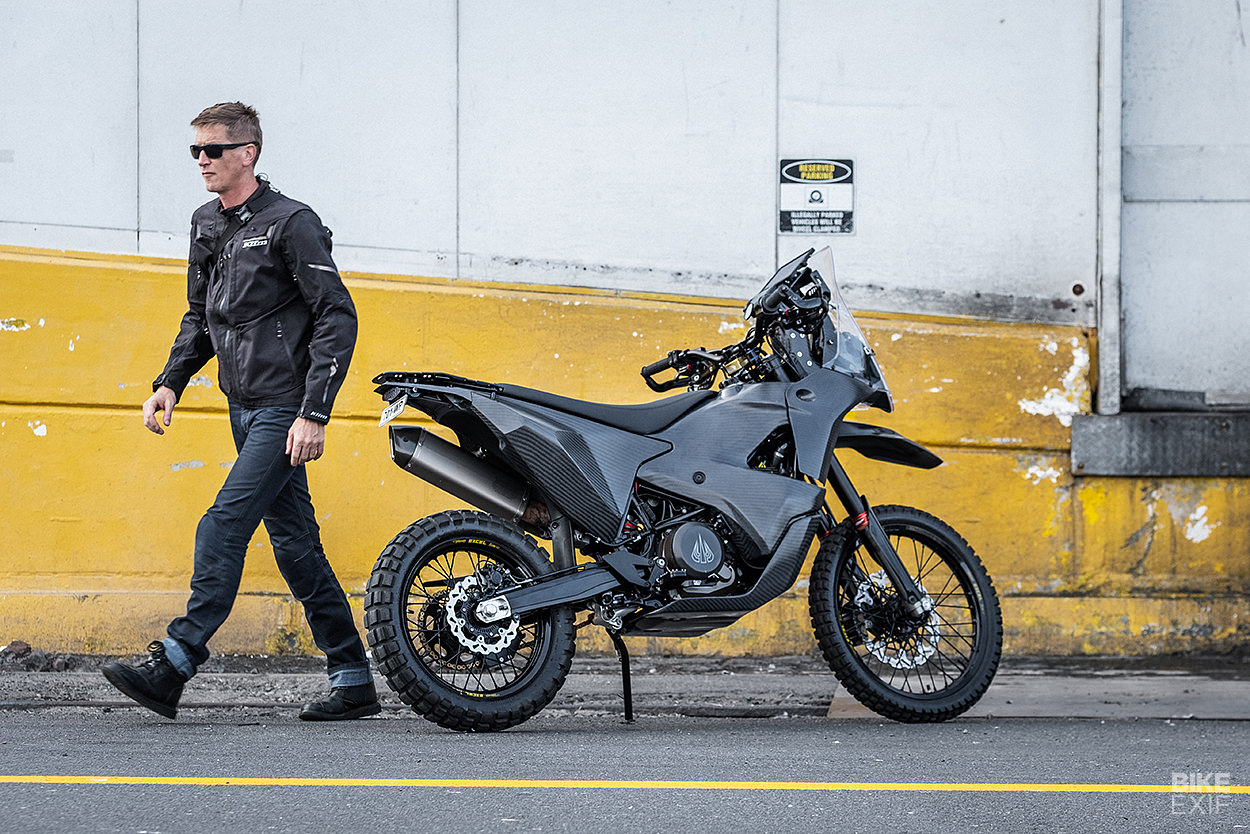 This Honda motorcycle can stay upright all by itself!