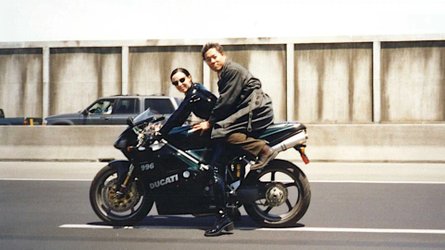 What kinds of movies and TV do you like to watch? No matter what your answer is, if it has any kind of stunt driving or riding in it, there’s an extremely good chance you’ve witnessed and enjoyed Debbie Evans’ work. She’s widely considered one of the top stunt drivers—and riders—in Hollywood, and as of November 2021, she has 396 stunt credits on IMDB to her name.

Evans started riding motorcycles when she was six years old. By the age of nine, she was competing in trials—and winning. In fact, by 1976, she became the first woman rider ever to reach the rank of Expert. Since no other women were really in the sport at the time, she competed against male riders regularly—and beat them. She was soon known as the best female observed trials rider in the U.S. and became a factory Yamaha rider.

As luck would have it, a short time later, she tried out for a part doing motorcycle stunts on the Roger Corman film Deathsport, starring David Carradine. From there, her stunt career took off, and she’s been doing stunts all over major Hollywood features and TV shows ever since.

You know That Scene in Matrix: Reloaded where Trinity is on the Ducati 996 and zipping crazily through traffic? That was Debbie Evans. Know the pre-production Cadillac CTS also doing stunts in that scene? That was also Debbie Evans. Incidentally, that’s a cool thing stunt performers get to do, and that regular actors don’t: Play more than one role as needed. Know who also stunt doubled every female character in Fast & Furious 6? If you guessed Debbie Evans, give yourself a cookie.

Starting out riding dirt bikes from an early age helped her gain the skills and way of seeing and thinking about things that have made her so successful throughout her life. We’re talking about a rider who was good enough to make it to the Scottish Six Day Trials and come 109th out of 280 total entrants as a teenager. To date, she’s won tons of awards, including seven Taurus World Stunts Awards (one of the biggest awards in her field). She’s also been inducted into the AMA Hall of Fame, as well as the Hollywood Stuntman’s Hall of Fame.

This love of all things fast is definitely in the blood, too. Debbie’s dad is racer David Evans, who was featured in the seminal motorcycle documentary On Any Sunday. Here in 2021, one of Debbie’s kids also followed in his mom’s footsteps and is a Hollywood stunt driver as well.  Debbie’s career shows no signs of slowing down, either, and she’s still making unreal stunts happen on screen in 2021.

There’s a really good documentary about stuntwomen that came out in 2018, called Stuntwomen: The Untold Hollywood Story, which features Debbie and her sister Donna, who’s also a highly accomplished stunt driver. It’s narrated by none other than Michelle Rodriguez, who Debbie’s doubled throughout the Fast & Furious franchise—and who frequently remarks, whenever she sees what Debbie’s doing, that she’s in the wrong line of work because she doesn’t get to have all the stunt fun. It’s exhilarating and well worth your time if you’re curious about what goes into making all those insane stunts happen in your favorite visual media.