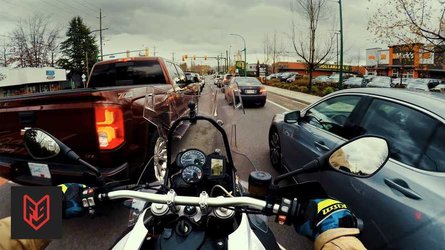 In the science fiction world, Isaac Asimov’s three laws of robotics exist to protect people and keep us safe. That’s what laws are for, right? For the most part, yes, but some laws have unintended consequences that may actually put motorcycle riders in more danger instead. FortNine discusses three of them here.

Normally anti-lock brakes are extremely helpful. I should know—ABS would absolutely have prevented my crash earlier this year. In low-traction conditions, however, particularly off-road, locking up a tire can actually help you stop faster. That’s why most adventure bikes allow you to disable ABS, something no car allows you to do with the push of a button. The problem is if you’re riding something like the BDR, with dirt for days, you have to remember to manually disable ABS every time you turn your ignition on, as FortNine demonstrates in a comical fashion.

This isn’t because corporate lawyers are worried about lawsuits. This requirement comes directly from the United Nations in Global Technical Regulation Number 3. It requires vehicles with ABS that can be disabled to automatically re-enable it every time you turn on the ignition. It’s easy to forget, and the next time you try to stop quickly on dirt, you won’t stop as quickly as you expect, or need to.

You and I both know that sitting on a motorcycle in stopped traffic makes you a sitting duck to get hit from behind by an inattentive driver. That’s why the rest of the civilized world allows motorcycles to filter between lanes to the front of the line. As a bonus, it lets bikes jump ahead of the line and get to their destinations a little faster, which also shortens the line for everyone.

With only a few exceptions, this practice is generally illegal in the US and Canada. Lawmakers don’t see the distinction between lane filtering and splitting, which is the free-for-all we often see on California highways and crash compilation videos. The rest of the world sees the advantage of filtering and permits it, but here we seem to have the attitude that if I can’t jump to the front of the line, nobody else should be able to either.

A full 34 percent of motorcycle crashes happen in right-hand curves. Only four percent happen in left-hand curves. Why is that? Is this why NASCAR only turns left? If so, why do they still crash so much?

The main reasons are two-fold. First, because we are required to ride on the right side of the road, any given curve is tighter when it’s a right than when you ride it in the opposite direction as a left. This can catch an unsuspecting rider unaware. Also, your sightlines through a left curve are much better than through a right curve because you’re much closer to the edge of the road and any obstructions.

Unfortunately, this issue can’t be regulated out of existence by switching to the left side of the road. That would only flip the issue to left turns instead of right for exactly the same reasons. The only real solution is to take more care for right turns. Slow down a little more, and hug the left side of the lane upon corner entry to maximize how well you can see through it.