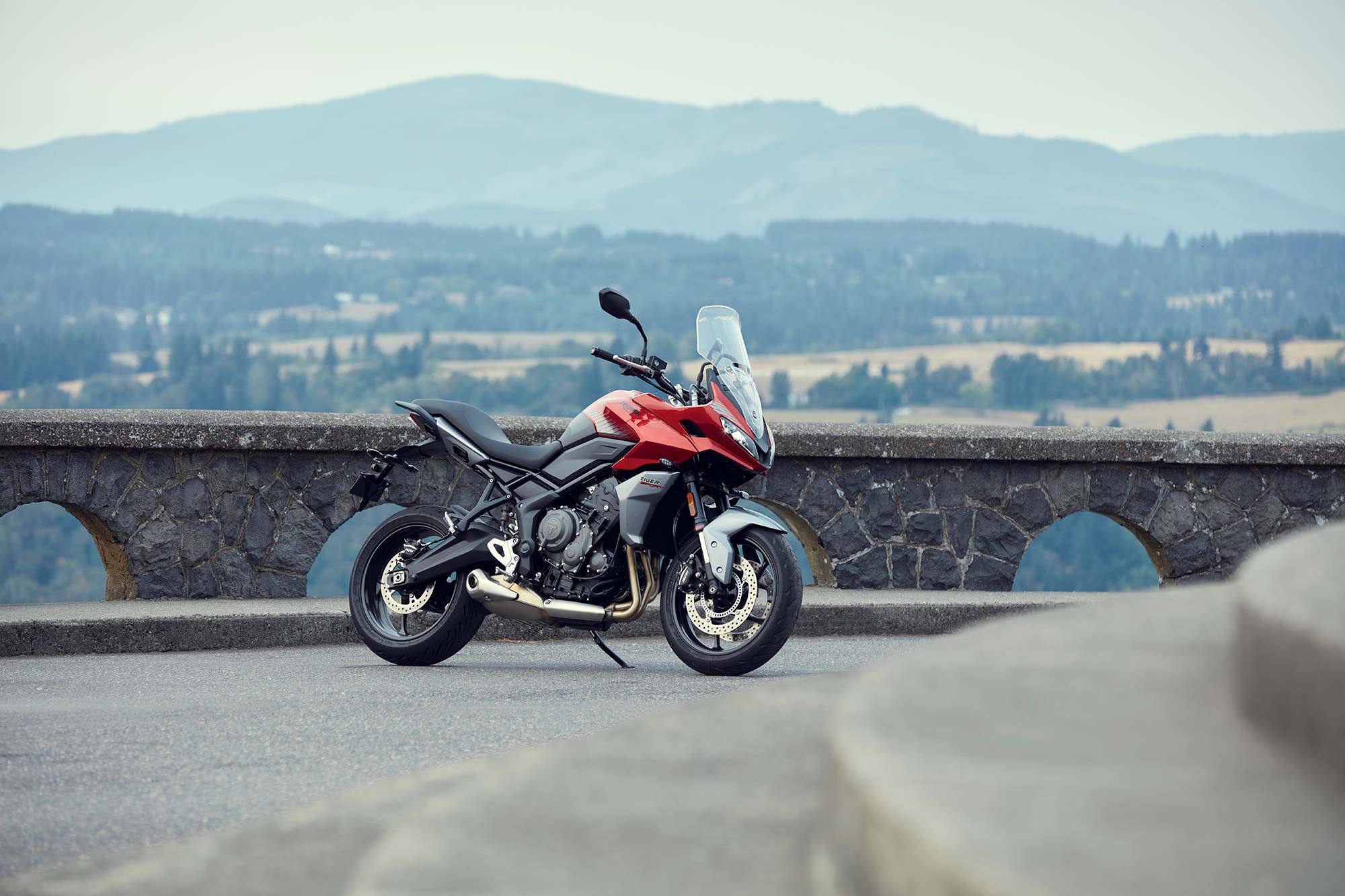 In the wake of a successful introduction of the Trident 660, Triumph is further leveraging its revitalized inline-triple platform with an all-new middleweight adventure model called the 2022 Tiger Sport 660. As with the Trident, the goal is to attract new customers to the brand via a combination of refined and approachable performance, premium build quality, and its relative-bargain $9,295 MSRP.

If the Tiger Sport 660 draws the attention of its roadster sibling, Triumph employees better be working double shifts—more than 12,500 Trident units have been sold to date. It has struck the market as an awesome entry-level option into a premium brand. 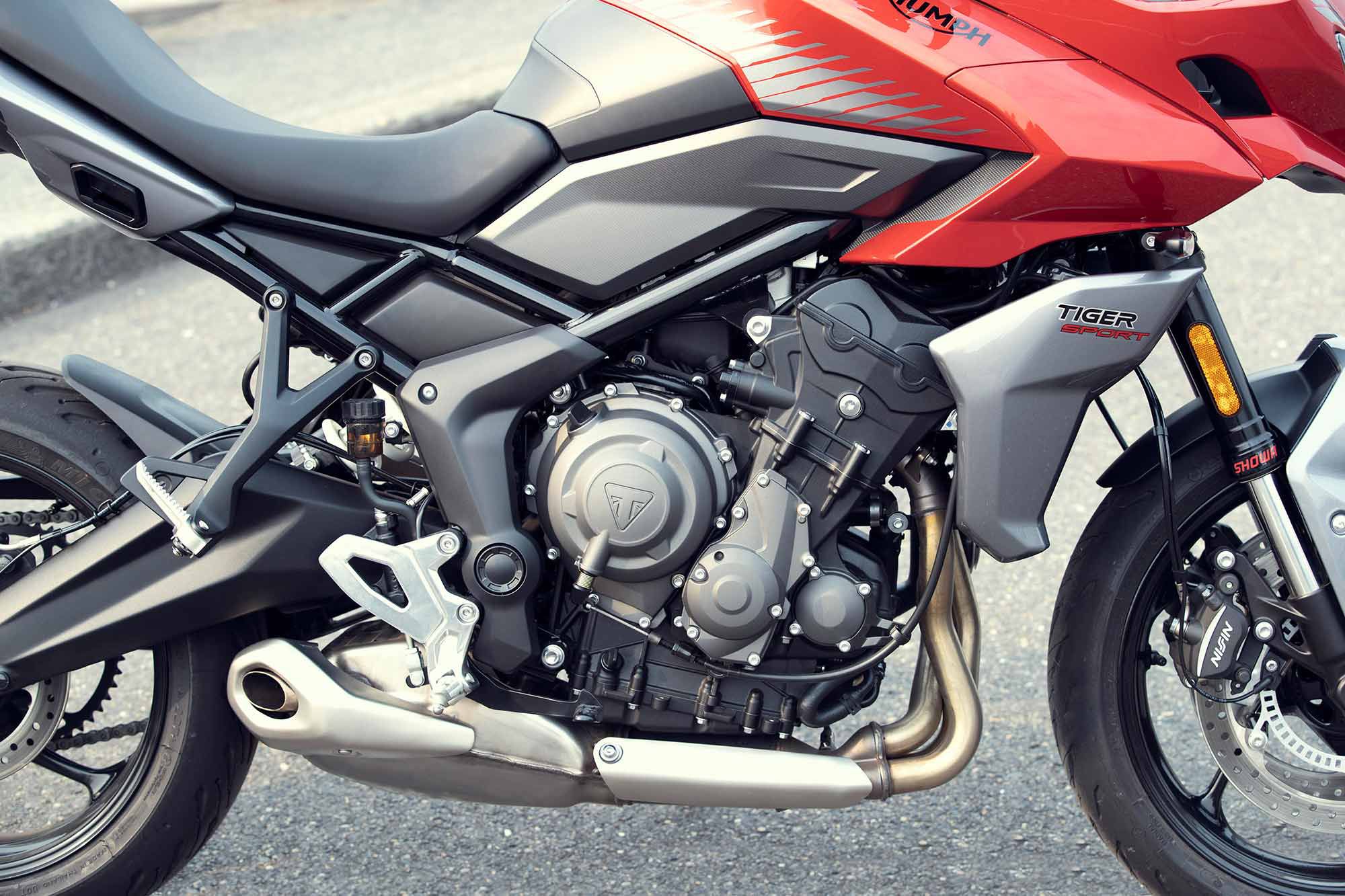 The heart of the Tiger Sport 660 is the same liquid-cooled DOHC 659cc inline-triple utilized in the Trident, which benefits from years of refinement through Triumph’s developmental work. When we placed the roadster on our in-house dyno, the Trident produced a modest 72.1 hp at 10,200 rpm and 42.9 pound-feet of torque at 6,700 rpm, but looking past that is where the powerplant shines. The Trident impressed Cycle World testers with its silky-smooth throttle application and linear power delivery that makes it equally approachable and entertaining for less experienced riders and seasoned veterans alike, and will surely do the same in the Tiger.

As with the Trident, the new Tiger Sport 660 will be equipped with Triumph’s ride-by-wire throttle system. Two selectable riding modes are available: Road and Rain. Each incorporates its dedicated traction control and throttle response parameters—TC can also be disabled if desired. The system along with vital riding information is accessed via a simplistic TFT display. The dashboard also features Bluetooth connectivity to the My Triumph mobile app, which allows riders to take advantage of turn-by-turn directions and interact with GoPro cameras. Neat stuff for a budget-conscious machine. 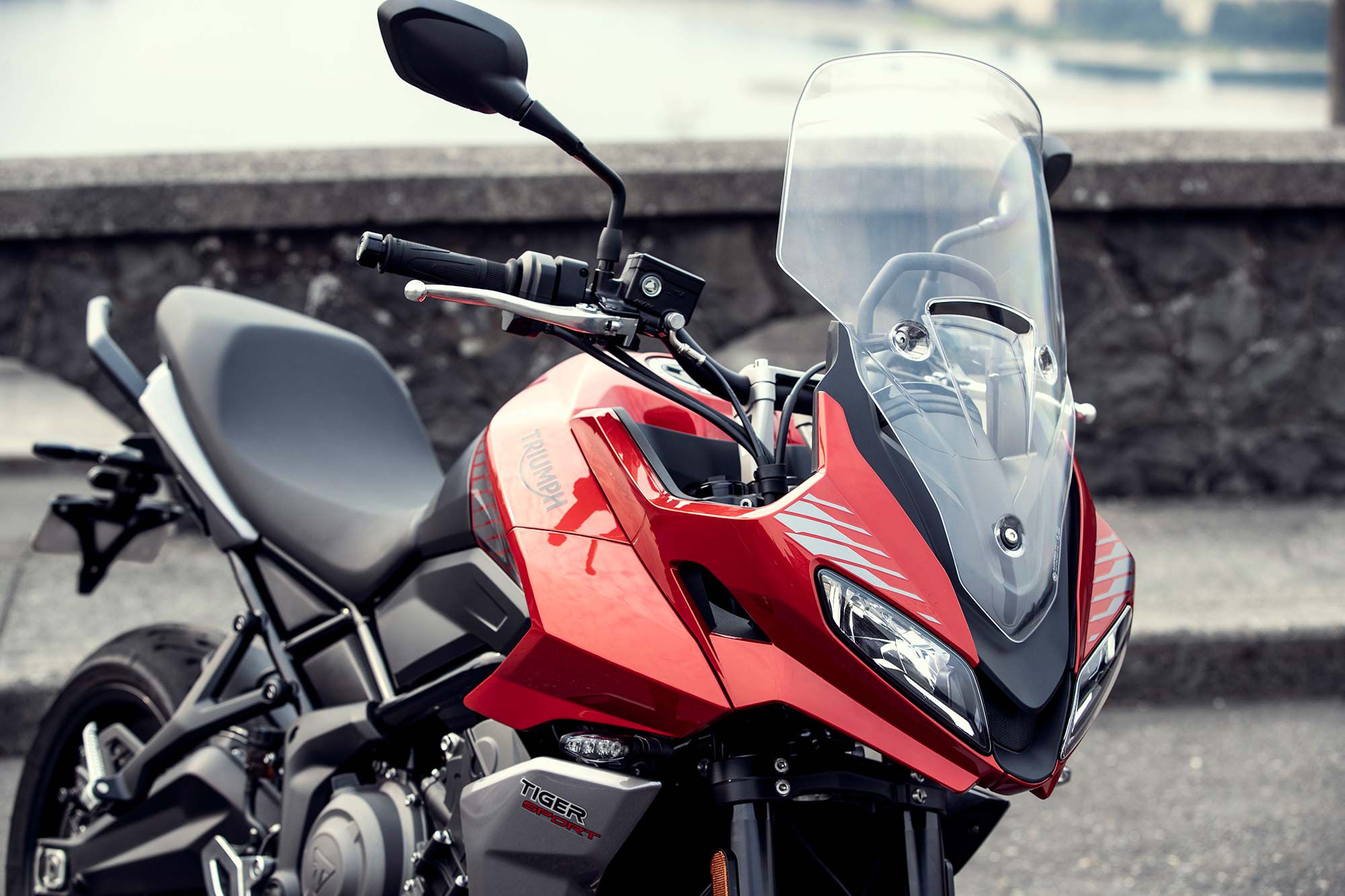 The Tiger Sport 660 gets aggressive and distinct styling with full LED lighting throughout. In this Korosi Red and Graphite colorway (a $125 upcharge) it looks very similar to the BMW F 900 XR. (Triumph/)

The Tiger 660 Sport also uses the same main chassis as the Trident, but receives sport-touring-focused changes throughout to increase versatility. The same 41mm nonadjustable Showa Separate Function Fork (SFF) is used, but receives a travel increase to 150mm (5.9 inches). A Showa monoshock has been adapted to the Tiger via a dual-rate spring to compromise solo and two-up riding. Triumph updated the subframe to accommodate the passenger and payload capacity, along with a slightly longer swingarm. A pair of Nissin calipers and non-switchable ABS bring the Tiger to a halt. 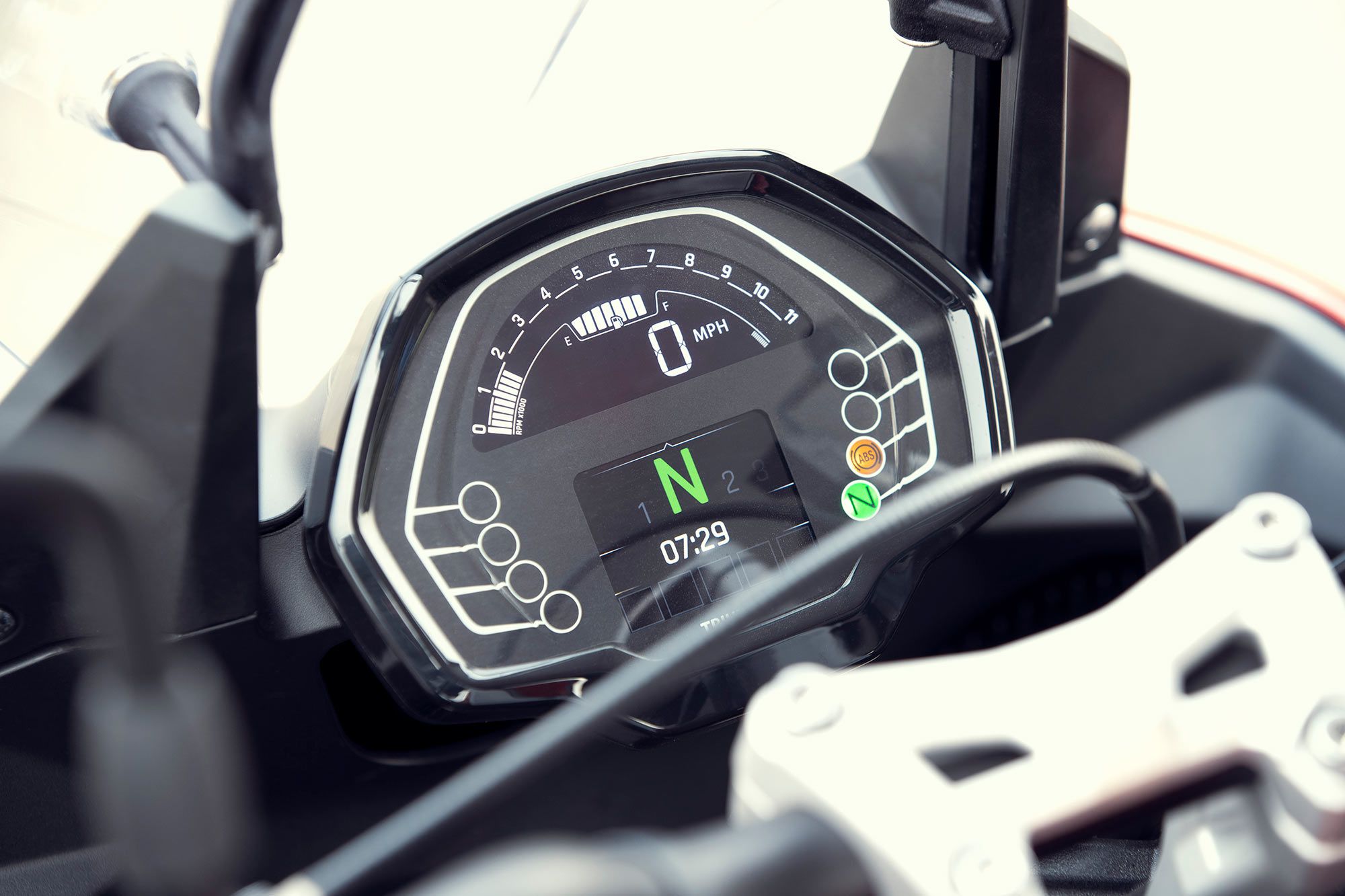 The Tiger gets a simplistic TFT display to show important riding information. (Triumph/)

The Tiger Sport 660 gets an aggressive styling, which looks similar to the BMW F 900 XR. Full LED lighting is used throughout with twin headlights at the front. Self-canceling turn signals are a nice touch too. A large, 4.5-gallon fuel tank also has a distinct styling and adds to the Tiger’s capability. 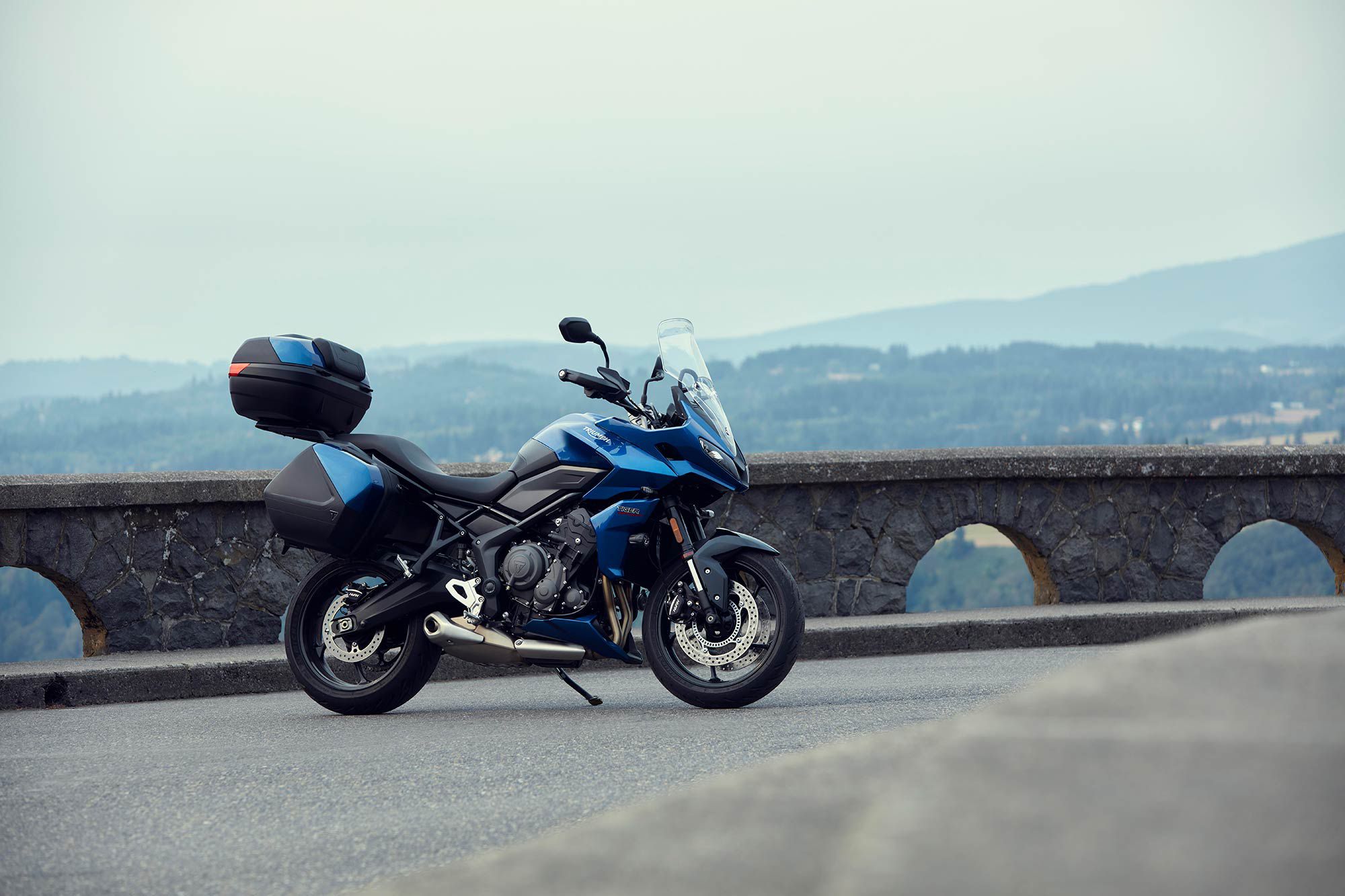 Triumph is offering a full range of accessories aimed at increasing the Tiger’s touring capabilities, including color-matched panniers, auxiliary lighting, 12-volt and USB charging ports, a bidirectional quickshifter, and more.

Triumph expects the Tiger Sport 660 to be available stateside in February of 2022.

Want an Ebike, But Not a Brand New Bike? How About a Conversion Kit