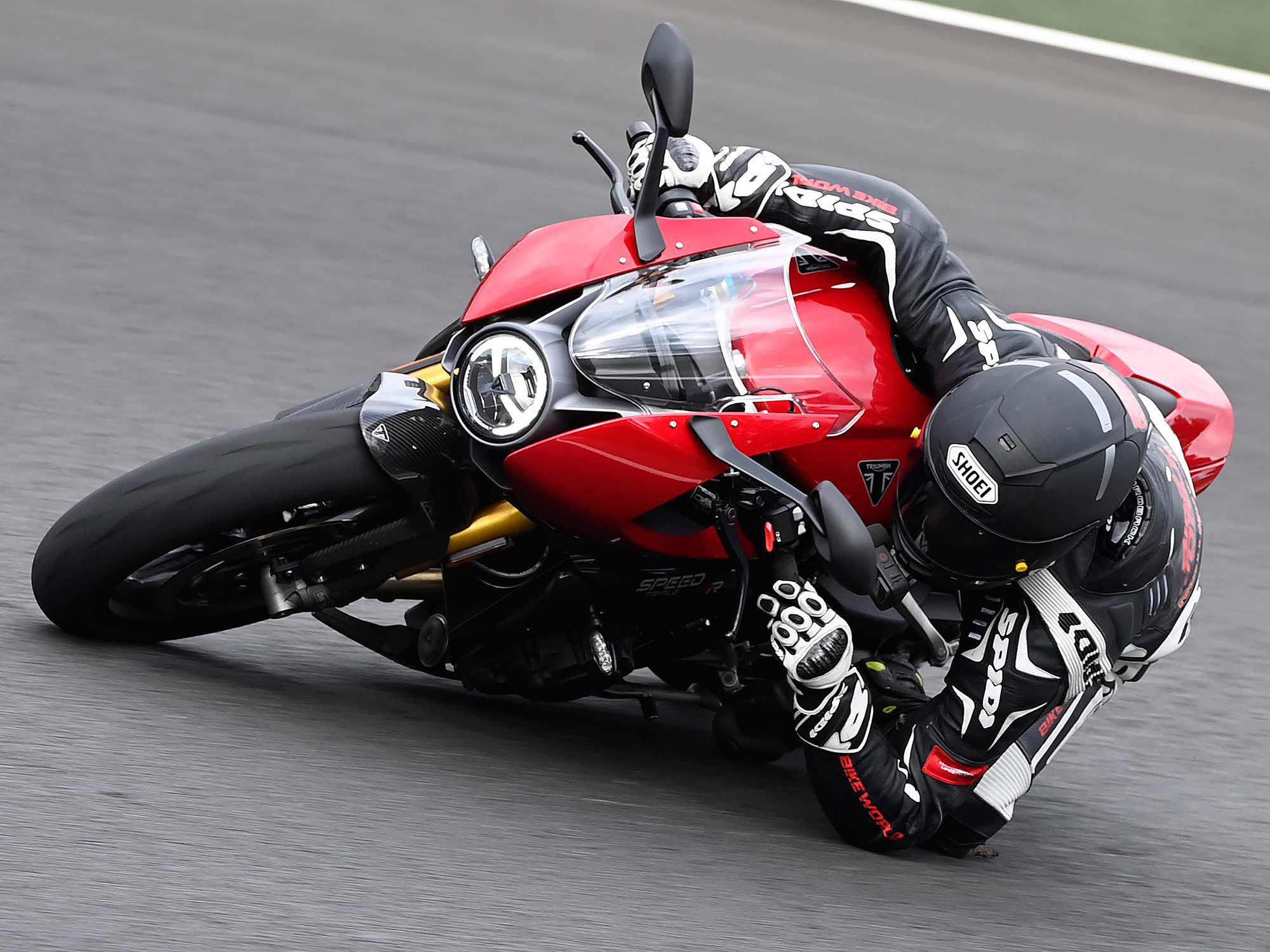 On the track and street, the Triumph Speed Triple 1200 RR brings sportbike performance with comfort and style. (Kingdom Creative/)

The Speed Triple 1200 RR may not be the full-on superbike we’re all still secretly hoping Triumph will make, but there’s absolutely nothing wrong with the performance of this new RR. That’s my resounding impression of the new, sportier Speed Triple as I chased old racing mates on track, popped wheelies out of the slower turns, and slid into the chicanes. If you’re watching lap times, then sure, it’s never going to lap as fast as a 1,000cc sportbike. But for the sheer pleasure of flowing around a track, it’s a belter. Put it on the road where it belongs, and it’s one of the most enjoyable sportbikes money can buy. It’s not a full-on superbike, but rather a sportbike you can live with longer than a trackday session at a time. (Kingdom Creative/)

When Triumph launched the Speed Triple 1200 RS earlier this year, it was more than just a gentle model update. It was a serious jump in power and technology. The 177 hp RS might have stopped short of the headline-grabbing power of the 205 bhp Ducati Streetfighter V4, and KTM’s Super Duke may make more torque, but the smooth, tractable three-cylinder motor in the Triumph makes it an easier ride than pretty much anything else in the class. And its wide spread of power means you can use more of it more of the time, without the need to constantly rattle up and down the gearbox. But with all this newfound power and speed, the Speed Triple RS leans itself more than ever to being ridden hard and fast, at which point you find yourself wanting a little more of a sports riding position to work with. Enter the 1200 RR.

The new Speed Triple 1200 RR takes the basis of the RS and builds it into what Triumph calls the ultimate road sportbike: a neat, contemporary cockpit fairing, clip-on handlebars, repositioned footpegs, semi-active Öhlins suspension, and a set of Pirelli Supercorsa SP tires—sportbike makeover complete. This shift harkens back to the very first Speed Triple back in 1994, with its clip-on handlebars, aggressive riding position and single round headlight. The cockpit fairing gives the bike a new look with a hint of cafe racer, a subtle ‘70s vibe that looks stunning in the metal, especially as its deep candy red paint catches the sunlight. In terms of wind protection, the low screen and bikini fairing don’t turn the thing into a touring bike, but they do offer more shelter from the cold morning air than the unfaired RS. On track the screen offers something useful to tuck behind along the straights to avoid your helmet smushing into your nose once speeds get up into triple digits. 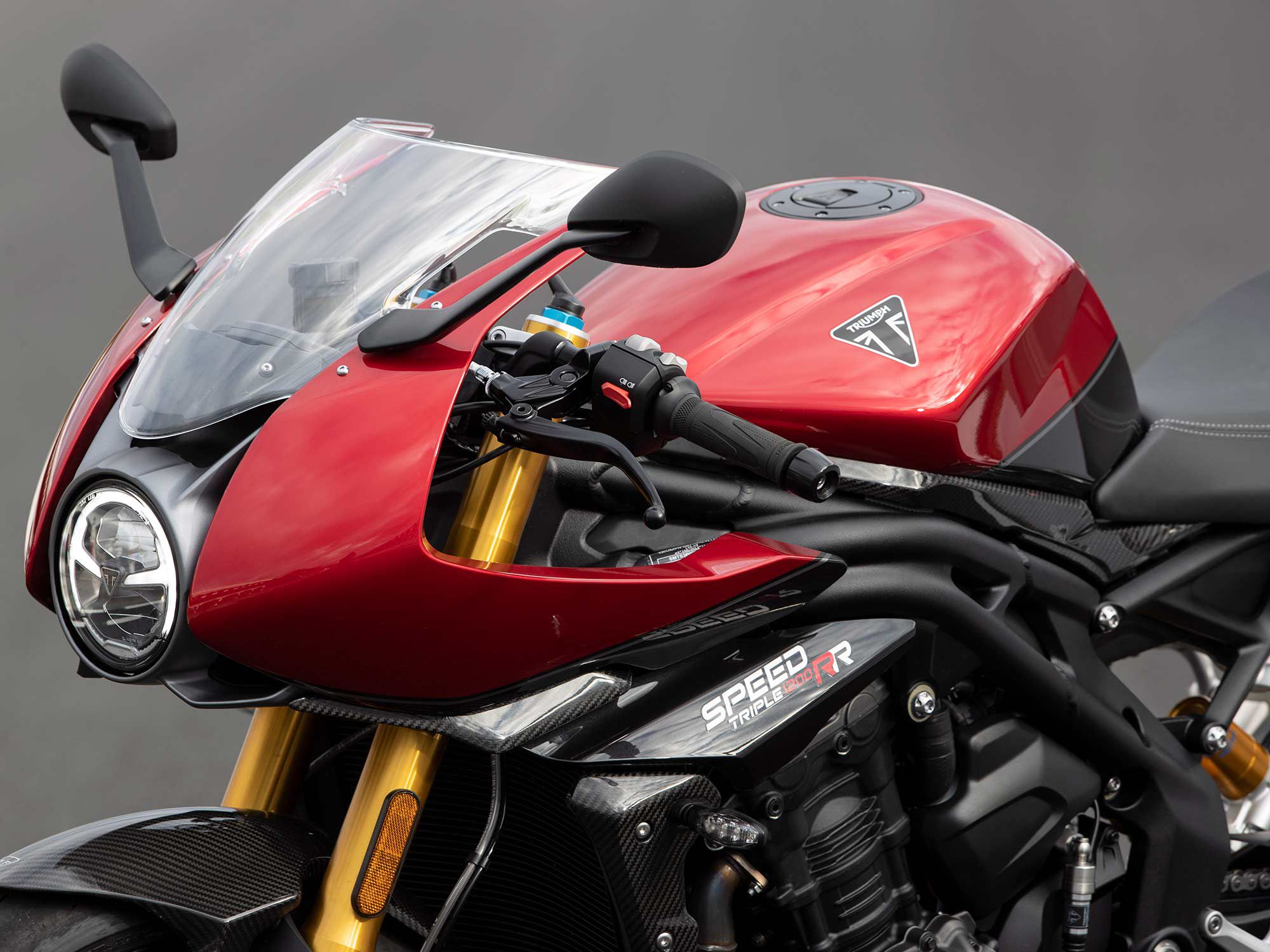 Clip-on handlebars tucked behind a bikini fairing add sporting character to the Speed Triple 1200 RR over the RS. (Kingdom Creative/)

The most significant change to the riding position comes from the clip-on handlebars, which are just over 5 inches lower and 2 inches further forward than the bars on the naked model. Combined with the footpegs, which have been moved up half an inch and back 1 inch, this allows a far more forward stance on the bike. It’s not full-on sportbike extreme, but more a halfway measure, somewhere between the regular Speed Triple and a Daytona 675. On the road this definitely feels more natural once you’re acclimated; it’s easier to hang off through the turns and easier to brace through the pegs with the throttle cranked wide open. When speed limits or traffic impose a period of calm cruising, the position is nicely balanced enough to let you spread weight between your feet, hands, and backside and not feel as if all your weight is bearing down through your wrists. At 5-foot-8 and riding in Kevlar jeans, the leg position felt absolutely fine for a few hours out on the road, though some of the taller riders in leathers found it a little cramped during the last few miles. But again, it hits a sweet spot somewhere between the tuck of a full-on sportbike and the sit-up stance of the naked model.

On Track and Road

On track the riding position makes just as much sense; you can concentrate on exploiting the never-ending drive from the 1,160cc motor without the feeling that you’re constantly hanging onto the bars. While pulling the bike into an apex, you can move your upper body around freely and shift off the inside of the bike without a great big set of wide handlebars getting in the way. During pure track use, I did find my boots touching down early, but not to the degree that it spoiled the fun. Just be ready for a slight increase in the toe slider budget.

Aside from the obvious styling and ergonomic differences, the biggest technological change over the RS is the inclusion of Öhlins’ Smart EC 2.0 electronically adjustable semi-active suspension package. The semi-active aspect of this system refers to electronic control of compression and rebound damping adjustment in the fork and shock while riding. This works within a number of preset modes offering more comfort or more dynamic performance, continuously adjusting and optimizing damper settings as the bike is ridden. The system also offers a degree of customization which lets you select changes to aspects of the bike’s handling, e.g., corner entry, braking, corner exit, and then modifies the damper settings and programming to suit. Switching between the riding modes gives a noticeable difference in both comfort and how much the bike pitches under braking or acceleration. 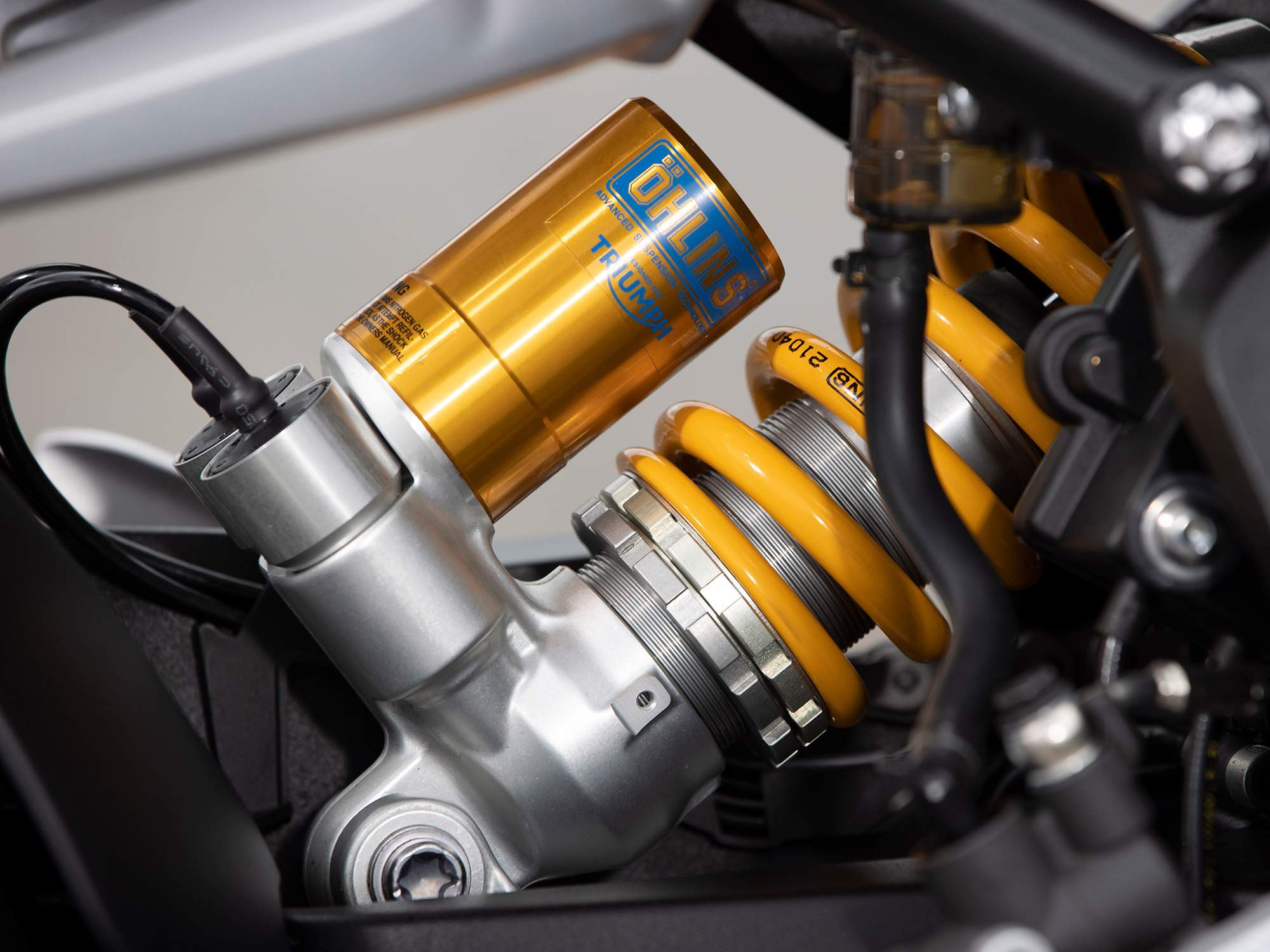 Between the perfectly smooth roads of Ronda and the newly resurfaced race track, we didn’t get an opportunity to see just how far the range of this suspension extends. I’d like to get it on some more bumpy, technical roads and see just how much scope the semi-active damping has.

Carving along the legendary Ronda road in Spain, the claims of “ultimate sportbike for the road” doesn’t seem too far-fetched. Almost every element of the Speed Triple feels finely balanced; the chassis is nimble enough to hustle the tight sections of the road without feeling twitchy or overaggressive. The engine has a huge spread of available power, letting you ride the wave in third gear through corners that would have you up and down the box on other bikes. There’s enough horsepower for serious progress, but never so much that the chassis (or your brain) feels overwhelmed. 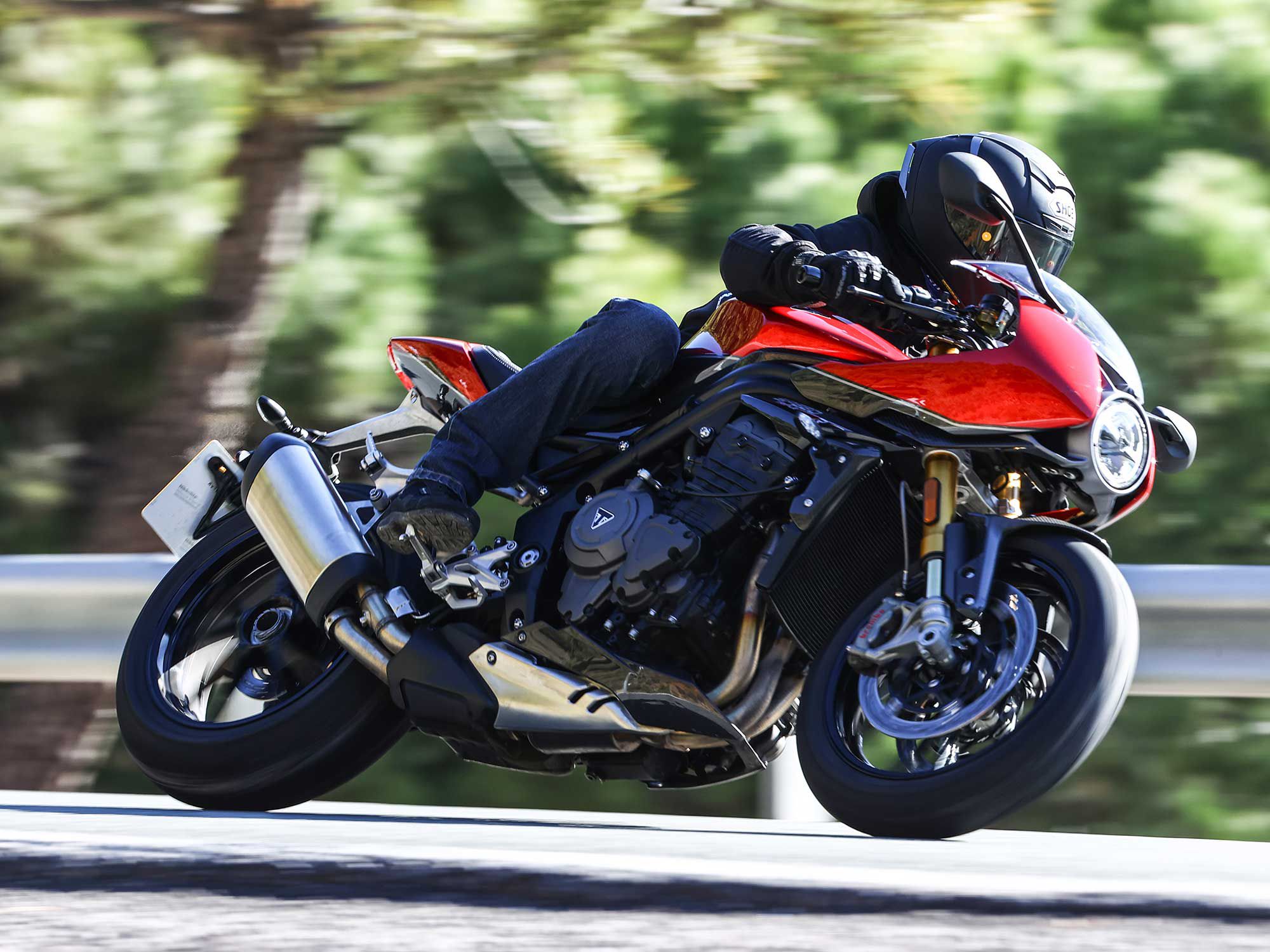 The riding position is sporty without being uncomfortable and the electronics package offers enough support to keep you safe without stepping too hard on the toes of fun. Except, that is, when it resets from track mode every time you park; that bit has a touch of the fun police about it. The only other tech complaint is the feel from the front brake; there’s tons of power, there was never a problem getting the bike stopped, but lever feel is a little too soft and a little too heavy, even after a fiddle with the adjustable rate lever. 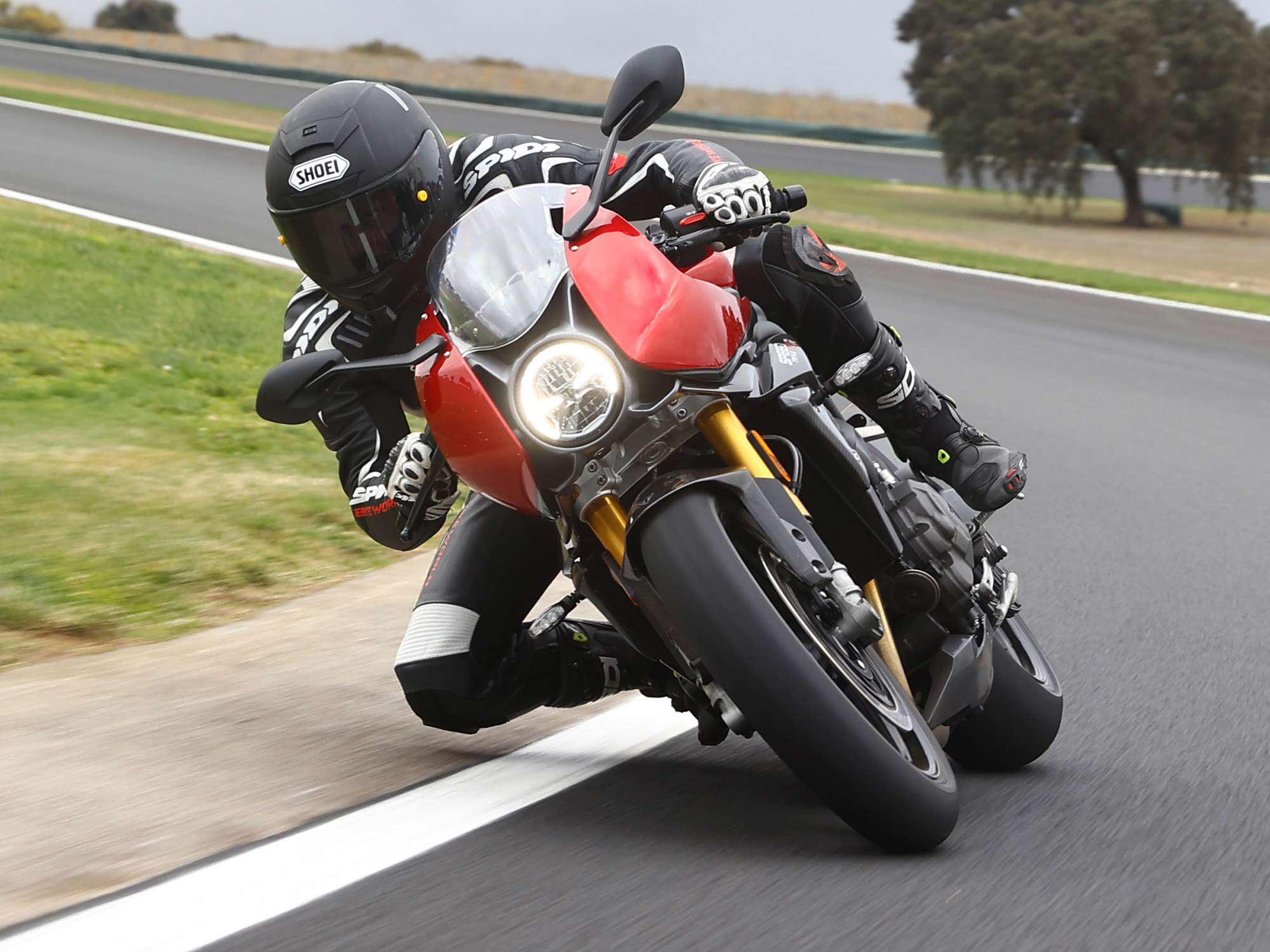 It’s more than capable of tearing up a trackday—before riding it home. (Kingdom Creative/)

A confession: In the last track session of the day my self-control started to fail me. I was out riding laps with an old racing buddy, dicing, sliding the bike about, and generally being childish. With each lap things got dumber and looser, each of us giggling into our helmets and taking liberties into the turns. As we rolled down pit lane at the end, laughing like idiots, it dawned on me that neither of us had felt like we needed more bike. In the face of a proper, full-fat superbike, the Triumph is a little slower steering, a little lazier to fire out of corners, generally not quite as sharp. But the RR is more than capable of partying hard on track and putting a massive smile on your face.

In some ways, it’s a Goldilocks bike, striking a great balance between performance and comfort, excitement and usability. In making that balance, there are undoubtedly compromises. Hardcore sportbike fans won’t find it sporty enough, while those on the road-going side of the fence may find the riding position compromises all-day comfort. But then, there are riders who think nothing of a 250-mile ride on a 600cc super sportbike, so there’s no overall right or wrong answer. Using the Speed Triple RS as a benchmark, the RR makes more sense on track, and I personally preferred the riding position for a day out chasing apexes in the mountains. The electronic suspension improves the quality of the ride and the styling always had me parking it somewhere I could see it. The RS is certainly a more relaxed, more comfortable riding position when you’re not riding hard. 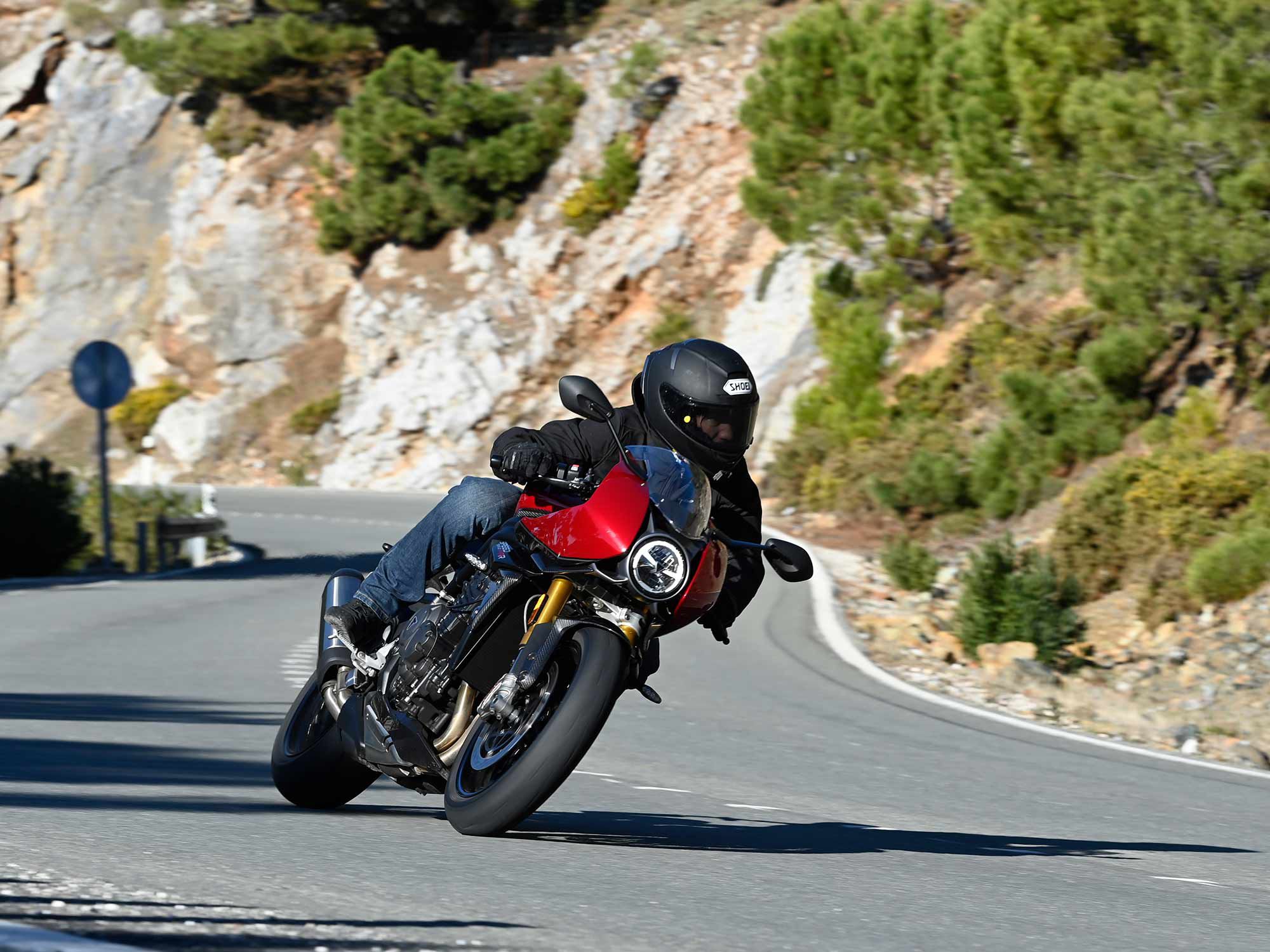 My final thought with the Speed Triple 1200 RR involves a comparison to the original 1994 bike. That was a hard, aggressive bike in its time, designed so that hooligans could tear up the streets. The motorcycle world has changed a fair bit since then; likewise, Triumph is a pretty different company now, and the new Speed Triple RR reflects that. It’s a stunningly finished, exquisite-looking bike that makes everything smooth, enjoyable, and easy. But that poses a question: Is it too refined? It lacks the road-shrinking Starship Enterprise feeling of outright speed found in Ducati’s Streetfighter V4. Next to the wheelie-hungry bar-shaking lunatic that is the KTM 1290 SuperDuke R, the Triumph feels almost sensible.

I suspect this means that either version of the Speed Triple is the thinking rider’s choice, a bike that’s more relevant and more usable 90 percent of the time. The RR gives you everything that is great about the Speed Triple RS with a smart, contemporary new look and a riding position that asks for fewer straights and more corners. 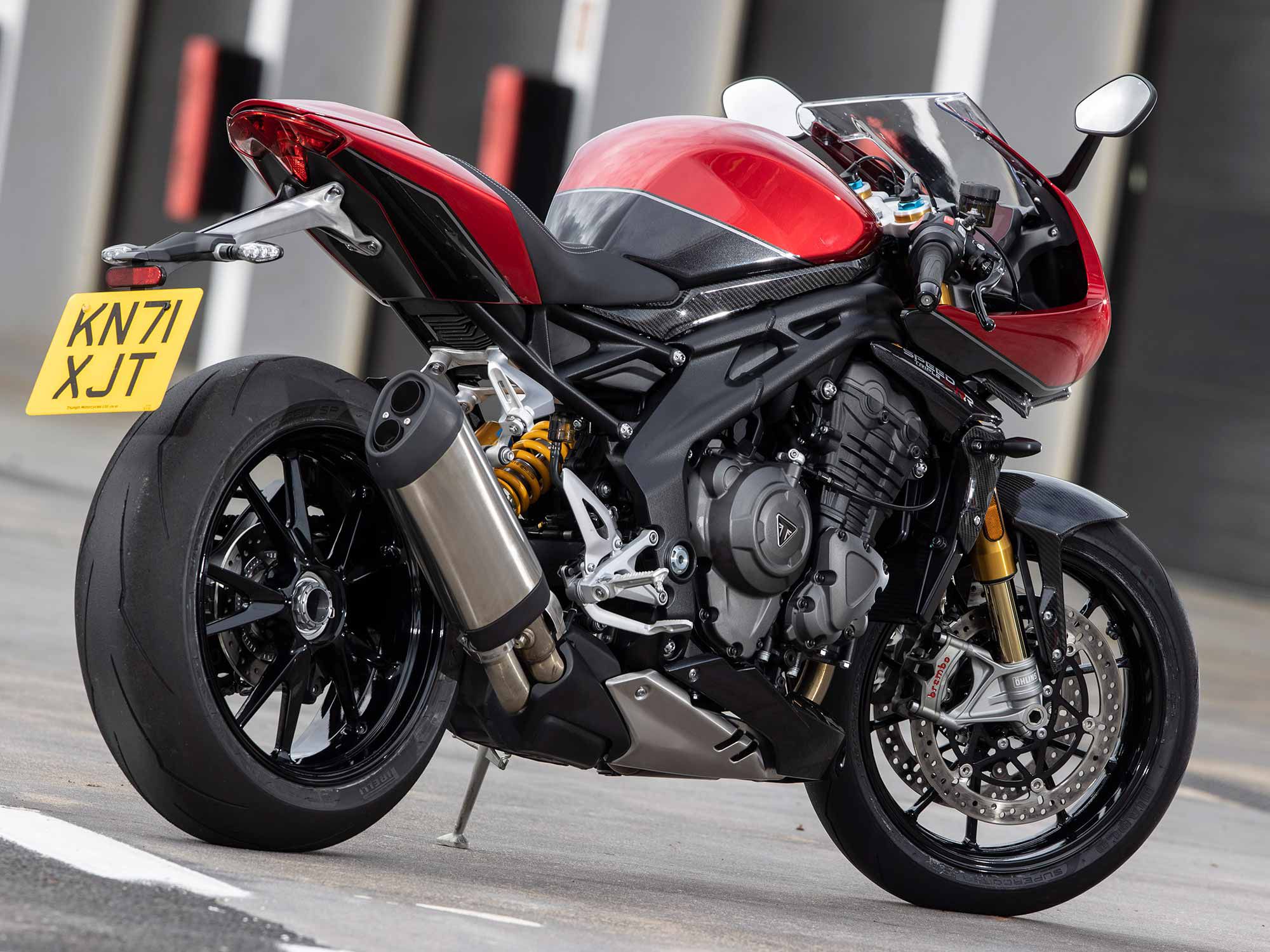 I enjoyed looking at the Speed Triple 1200 RR as much as I did riding it. (Kingdom Creative/)